Primary Myelofibrosis associated Nephropathy is a recently described entity. Primary Myelofibrosis (PMF) is a Myeloproliferative Neoplasm (MPN) where the marrow space shows fibrosis with megakaryocyte dysplasia. We present a case of a 32 year old patient who was detected to have proteinuria, renal dysfunction and anemia ,on a routine health check up. Primary Myelofibrosis was confirmed by positive Jak 2 expression. Kidney biopsy showed focal segmental glomerulosclerosis along with thickened glomerular basement membrane. The histomorphological features of renal and bonemarrow biopsies are analysed and a detailed review of the literature is done.

Primary Myelofibrosis is a rare Myeloproliferative disease. Nephropathy associated with Myeloproliferative neoplasm is a recently described entity and the features and pathophysiology are poorly understood. We discuss the case of an asymptomatic young male, who was detected to have deranged renal function tests and severe anemia.

A 32 year old man was detected to have renal dysfunction and anemia on a routine health checkup. He gave a history of frothy urine for the past one year. He did not give a history of pedal edema hematuria or puffiness of face. On examination, his liver was palpable 2 cm below the right costal margin and spleen 3cm below the left costal margin. He was detected to have a serum creatinine of 4.2mg/dl, proteinuria of 4+ on dipstick and hemoglobin of 11.3gm/dl and his 24 hour urine protein was 8816.4 mg/day and ESR was 46mm/hr.

Kidney biopsy showed 12 glomeruli of which 8 were globally sclerosed and 2 showed segmental sclerosis (Figure 2). Nodular hyalinosis was seen in most of the glomeruli. A few foci of micro aneurysms were detected in glomerular tufts and thickening of basement membrane noted in many areas. Tubular atrophy and interstitial fibrosis seen in 90% of the core. A mild patchy interstitial mononuclear infiltration seen involving 10% of the core. Interlobular arteries showed medial hypertrophy, nodular hyalinosis and intimal fibroplasia.  DIF showed 3 glomeruli, all sclerosed and negative for IgG and IgA.Trapping was seen for IgM, C3C, C1q. Kappa and Lambda and fibrinogen show 1+ positivity. Electron microscopy showed diffuse thickening of glomerular basement membrane and mesangial matrix expansion. No electron dense deposits were present. 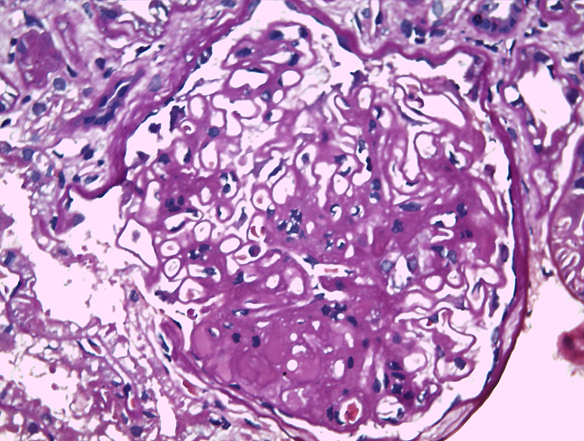 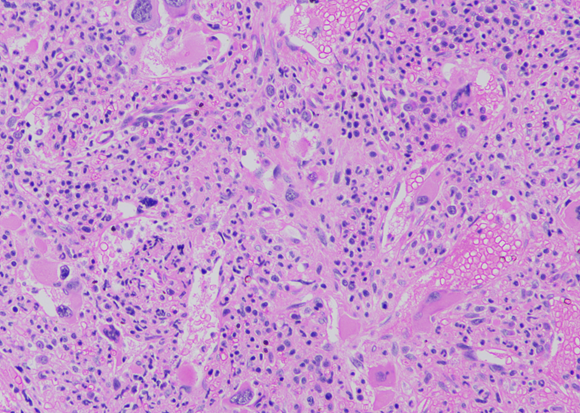 Primary myelofibrosis is a clonal myeloproliferative neoplasm (MPN) where abnormal megakaryocytes and granulocytes proliferate with deposition of fibro collagenous tissue.1 This results in extramedullary hematopoiesis and splenomegaly. 1 Leucoerythroblastic picture is seen in the peripheral smear.1 Renal involvement in MPN is rare.2 The clinical presentation can be nephrotic syndrome and renal insufficiency. 3 Renal dysfunction is due to extramedullary hematopoiesis (EMH) and glomerulopathy. Extramedullary hematopoiesis could be seen as an interstitial infiltrate, mass or as sub capsular and peri capsular infiltrate. The usual indication for kidney biopsy is proteinuria and renal insufficiency.4 In our case the patient had proteinuria,etected on routine health checkup.

Histopathological features vary in various studies and most of the series report interstitial fibrosis and tubular atrophy in 100% cases, intracapillary hematopoietic cells in 33% and EMH was present in 72% of cases and focal sclerosis in 64%.3 Another series of 11 patients showed mesangial sclerosis in most of the cases with 37% showing global glomerulosclerosis, and 73% with focal segmental sclerosis. 4 Prominent luminal hyalinosis was present in many glomeruli in the series. Our case also showed global and focal segmental sclerosis with luminal hyalinosis in many. Extra medullary hematopoiesis in kidney was not seen. Fibrinoid necrosis or crescents are not usually found in MPN Glomerulopathy.4 The morphological differential diagnosis of MPN-related glomerulopathy includes diabetic glomerulosclerosis, smoking-related glomerulopathy, and primary focal segmental glomerulosclerosis.2

No immunofluorescent deposits of IgG, IgA, IgM, C3C, C1q, kappa and lambda should be seen in MPN. 4 The present case also showed no significant DIF deposits except for focal trapping of IgM and C3c in the sclerotic areas.The series by Said et al showed that none of the 11 cases showed any immune complex deposition on electron microscopy. A mild thickening of basement membrane and diffuse foot process effacement are described. Our case showed foot process effacement and GBM thickening and absence of electron dense deposits. 3, 4

Even though a few case reports and short series were published, the first systematic analysis was done by Said et al.4 In a study by Sordo et al in 2017, the analysis showed that 68% of the patients with MPN had PMF, 81% were males, and median age was 66.5 years (range 49 – 87). Our patient was a young male of 32 years. Splenectomy can be offered as a treatment for patients with splenomegaly.3 In the series by Said et al, they treated a few patients with renin–angiotensin system blockade alone, and some with steroids. However, all the patients progressed to End stage renal disease (ESRD). Large cohort studies and long term follow up are not available at present.

Del sordo etal suggest that every patient diagnosed to have MPN, should have a systematic evaluation of kidney function and should be closely followed up to know the natural evolution of this disease.3

Myeloproliferative neoplasm associated nephropathy is a very rare disease and its awareness is important in timely diagnosis and treatment. Large cohort studies are not available at present, due to the low prevalence of this nephropathy. 5, 6

Myeloproliferative neoplasm associated Nephropathy is a recently described entity. The awareness about the glomerulopathy helps clinicians to look for glomerulopathy in MPN patients. The early initiation of treatment can minimise the kidney damage.

The authors declare that there are no conflicts of interest regarding the publication of this paper.