Head and neck fibrosarcoma are extremely rare, and fibrosarcoma arising is scalp is very rare with only occasional case reports. To be labelled as fibrosarcoma, it must lack features of well-defined fibrosarcoma subtypes and other entities. Here we report a case of a 48 years old female who came to surgery OPD with complaints of a painful nodule over the occiput. Excision was done and histopathology and immunohistochemistry confirmed the diagnosis of fibrosarcoma. We are here reporting this case because of its rarity and diagnostic difficulties.

Sarcomas are infrequent and heterogeneous tumours of mesenchymal origin; therefore, we encounter difficulties in the differential diagnosis. It is found most commonly around the knee, followed by pelvis.

1–2% of all malignant neoplasms in adults and between 4% and 10% of head and neck cancers, represents sarcoma,1 and 1% of all head and neck region tumours are Fibrosarcoma.1, 2, 3, 4 It can be primary or due to other premalignant lesions like Paget’s disease of bone, fibrous dysplasia, irradiated giant cell tumour, bone infarct or chronic osteomyelitis.

Here we report one rare case of fibrosarcoma arising from the occipital subcutaneous region in a 45-year-old female. To the best of our knowledge, there are only occasional case reports of this tumour, at this site.

48 years old female patient who came to surgery OPD of VMMC & Safdarjung Hospital with complaints of a painful nodule over the occiput. A history of similar swelling at the same site was given for which she was operated at a peripheral hospital 1 - 1/2 years back. 6 months later, she developed a nodule at the scar site which was gradually increasing in size. The overlying scar appeared normal. Underlying cranial bones were unremarkable on X-ray skull. The nodule was freely movable and did not seem to be fixed to the underlying bone.

The tumour measured 3 × 2.5 cm and was firm in consistency. The cut surface was yellowish-white (Figure 1a). Neither haemorrhage nor necrosis was seen.

The neoplastic cells were spindle-shaped, had fusiform nuclei and scanty eosinophilic cytoplasm with indistinct border and arranged in well-formed interlacing bundles and herringbone pattern which surrounded or contained thin-walled slit-like vessels (Figure 1b). The myxomatous change was not seen. Focal areas of that typical herringbone pattern was detected. Both typical and atypical mitosis were seen (Figure 1b).

a: Cut Surface of tumour, firm in consistency an yellow white in colour; b: Haematoxylin & eosin stained section from the tumour, showing spindle shaped tumour cell tumour arranged in a herringbone pattern (10X) 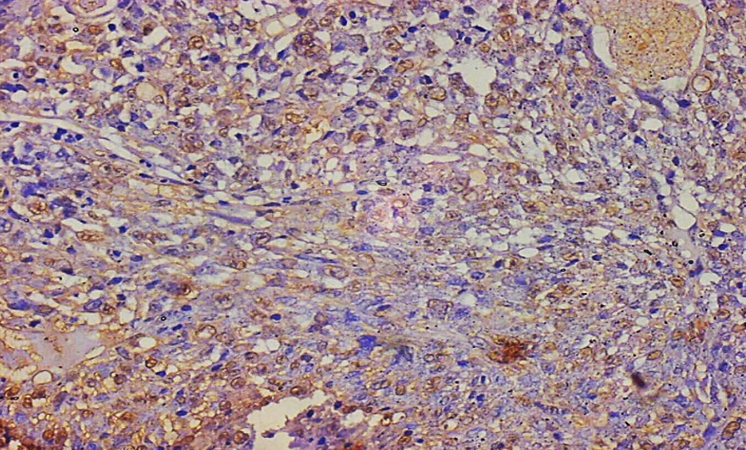 Fibrosarcoma is a malignant mesenchymal tumour composed of fibroblasts that may recur locally or metastasize to other sites as well. It presents in adult age, 30-60 years, and affects men and women equally. 5 83.0% and 34.0% are the overall ten-year survival of low and high-grade sarcoma of the bone respectively. 6 Most of the times, it involves deeper structures, where it appears to be originated from the intra- and intermuscular fibrous tissue, fascial envelopes, aponeuroses and tendons, namely subfascial involvement. Most of the smaller tumours tend to be well-circumscribed and frequently are partly or completely encapsulated. Therefore such small, well-circumscribed fibrosarcomas may be misleading and an erroneous benign diagnosis may be made which leads to inadequate therapy.

Fibrosarcomas which arises from the subcutis excluding dermatofibrosarcoma protuberans are rare and tend to arise in tissues damaged by radiation, heat or scarring. The present tumour was freely movable and did not seem to be fixed to the surrounding tissue, suggesting the subcutaneous tissue in origin and not arising from the epicranial aponeurosis. The patient had a history of scarring in the occipital region. The present tumour originated from the subcutaneous tissue and showed superficial growth, that is, upward growth to the overlying subcutaneous tissue without displaying involvement of aponeurosis and downward growth to the skull. On routine microscopic examination, the neoplastic cells were all spindle-shaped and showed interlacing bundle formation and a herringbone pattern, suggesting fibrosarcoma. There were no significant dermal/epidermal and dermal changes in the present tumour and it was also CD 34 negative, which precluded the possibility of fibrosarcomatous areas of dermatofibrosarcoma protuberans (DFSP).

There are a variety of disease entities proposed in the range of low-grade fibrosarcoma, such as sclerosing epithelioid fibrosarcomas and low-grade fibromyxoid sarcomas and myofibrosarcomas. Proliferation of fairly uniform, small, slightly angulated, round to ovoid epithelioid cells with prominent hyaline sclerosis is the characteristic of sclerosing epithelioid fibrosarcomas, which was not detected in the present tumour. The characteristics of low-grade fibromyxoid sarcomas are contrasting fibrous and myxoid areas of various size, a swirling, whorled growth pattern at least in part, low to moderate cellularity and bland, benign-appearing fibroblastic spindle cells with no or slight nuclear pleomorphism and few mitotic figures; however, the present tumour did not show myxoid change. The treatment of choice is radical surgery. Radiotherapy and chemotherapy can be used in inoperable cases or as a palliative measure. Prognosis is directly related to histological grade, tumour size and adequate surgery with free margins.

The present tumour was composed of monomorphic spindle cells showing interlacing bundle formation and a herringbone pattern, positive for the markers of fibroblasts and therefore the diagnosis of fibrosarcoma was made.