Panicker, Reshma M, and Issac: Colonic ganglioneuromatous polyposis in a 6-year-old girl – A case report and review of literature

Ganglioneuroma of the gastrointestinal tract is a rare mesenchymal tumor of neural origin, especially in childhood. They are categorized into three different morphological subtypes, namely, polypoid ganglioneuroma, ganglioneuromatous polyposis (GP), and diffuse ganglioneuromatosis. Patients with ganglioneuromas have different presentations depending on the location, extent, and size of the lesion. We report here a case of colonic ganglioneuromatous polyposis, presenting as abdominal pain and chronic constipation in a 6‑year‑old girl. Although GP cases are reported in adult age group, cases in pediatric age group are rare. Only a few cases are reported in the literature of GP in the pediatric age group. Although rare, this disorder must be taken into consideration in the differential diagnosis in every patient with symptoms such as abdominal pain, constipation, and lower intestinal bleeding, to avoid a delayed diagnosis.

A 6-year-old girl presented to the OPD with complaints of periumbilical abdominal pain, intermittent difficulty in defecation, bleeding per rectum, vomiting, loss of weight, and loss of appetite for the past three to four years. The patient had a history of rectal polyp excision four years back and sigmoidoscopy two years back. No previous reports were available.

Her vitals and other lab investigation parameters were within normal limits. She was admitted for colonoscopic evaluation.

A diagnosis of colonic ganglioneuromatous polyposis was made. Detailed history taking and physical examination revealed no evidence of any preexisting symptoms of Cowden syndrome, MEN2B, or NF1.

The family members were counseled, the patient treated symptomatically, and discharged uneventfully. She was symptom‑free on repeat examination after a week and was lost to further follow‑up. 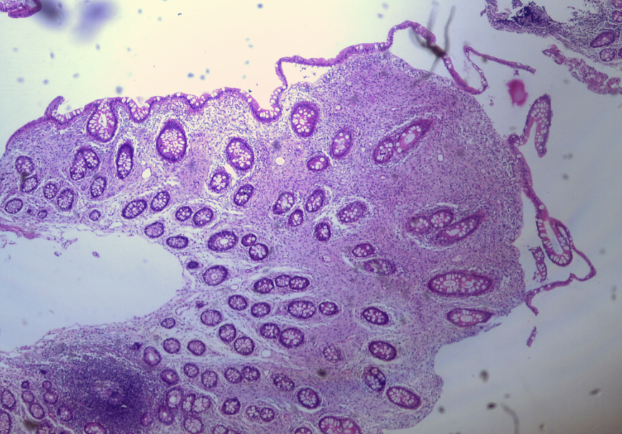 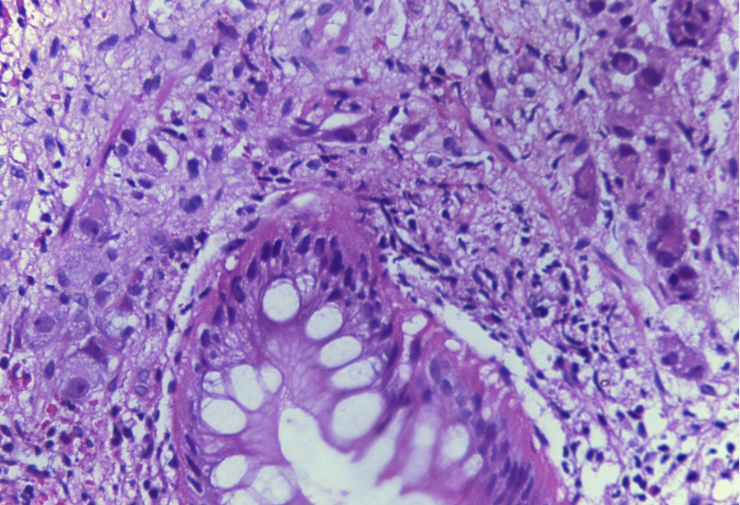 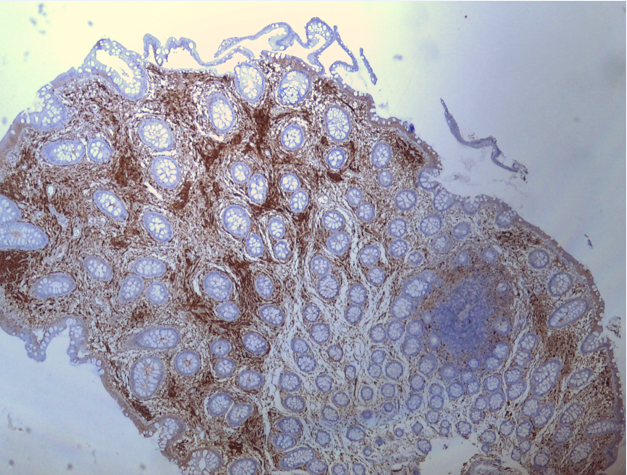 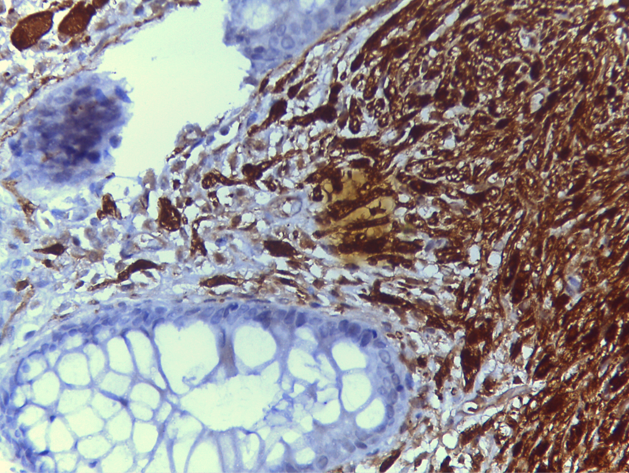 Ganglioneuroma is a rare benign neoplasm of neural origin composed of mature ganglion cells, satellite cells, and Schwann cells. They are found at various anatomical sites in the body including mediastinum, retroperitoneum, adrenal glands, as well as GI tract.

Most ganglioneuromas of the GI tract occur in the colon, with a predilection for the left side and the rectum. Solitary polypoid ganglioneuromas are most common and are usually identified incidentally at the time of colonoscopy in middle-aged to older adults.3, 4, 5 Ganglioneuromatous polyposis usually presents as multiple sessile or pedunculated polyps with a varied extent of involvement in the GI tract. It is often associated with Cowden syndrome where multiple polypoid ganglioneuromas are seen in addition to several other types of polyps, including hyperplastic polyps, adenomas, inflammatory polyps, and hamartomatous polyps.1 Diffuse ganglioneuromatosis may manifest as bowel wall thickening or a more discrete mass.6 It has an association with MEN type 2B and less commonly with NF1 with germline mutations identified in RET, and NF1 respectively.

The clinical presentation of ganglioneuroma is quite variable depending on the location and size of the lesion. GI ganglioneuroma may present with abdominal pain, rectal bleeding, constipation, diarrhea, intestinal motility disorders, and megacolon with intestinal obstruction. 3, 5, 7, 8 Colonic ganglioneuromas are confirmed by colonoscopy followed by polypectomy or biopsy.

These lesions are benign and usually seen in adult population. Rarely it has been reported in pediatric population. Mitra S et al. 6 reported a case of diffuse intestinal ganglioneuromatosis, presenting as intestinal obstruction and chronic constipation in an 11-year-old boy. No other systemic manifestations or syndromic association were identified in that case. Soccorso et al. 9 described a case of a 5-year-old girl who presented with intermittent colocolic intussusception. A ganglioneuroma centered in the muscularis propria of the sigmoid colon was identified.

When presenting as polypoid ganglioneuromas, cystic glands may be present in the lesion, reminiscent of juvenile polyps in some cases and this can create a diagnostic dilemma. Multiple colonic polyps occurring in childhood are more suggestive of syndromic diseases like Juvenile polyposis syndrome, Cowden’s syndrome and Familial adenomatous polyposis, typically associated with positive family history. However in this case there were no pathognomonic clinical evidence of syndromic association or family history of GI tract disorders and the patient had been advised regular surveillance.

Management is ultimately determined based on the initial presentation of the patient and whether a germline mutation is identified. Clinical recognition and diagnosis of individuals who are at risk of harboring germline mutations are critical for the prevention and management of potentially life-threatening neoplasms.

There are no conflicts of interest