This case report was written in view of rarity of presentation. Antenatal ultrasound of a 28 yr old mother at 27 weeks gestation shows a singleton fetus, normal liquor and an estimated fetal weight of 1.7 kg, placenta was attached in the upper segment and there is no evidence of congenital anomalies. The mother had pregnancy induced hypertension and she had a history of abortion. She delivered a baby of 36 weeks gestation by cesarean section. The birth weight of the baby was 1.8kg. The baby cried immediately after birth and cord was clamped and cut. The placenta along with umbilical cord and membranes was sent for histopathological examination. Grossly, the placenta weighed 300gm and cotyledons were preserved on the maternal surface of the placental disc. Membranes were translucent. The insertion of the umbilical cord was paracentral and cut surface of the umbilical cord showed one umbilical artery and one umbilical vein. (Figure 1) Serial sectioning of the placenta showed infarcted areas. Confirmation of single umbilical artery was done microscopically. (Figure 2)

General and systemic examination of the baby showed no dysmorphic features or congenital anomalies. Abdomen and echocardiography were done which showed no anomalies. Baby was feeding well and on regular follow up. 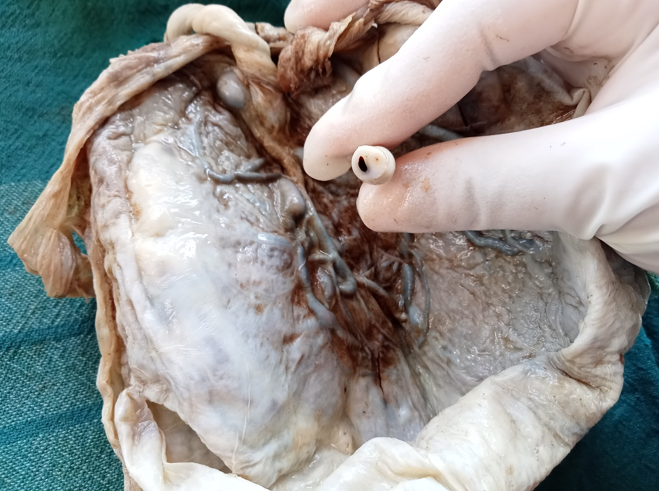 Mothers with maternal diabetes mellitus, toxaemia of pregnancy, antepartum hemorrhage, polyhydramnios and oligohydramnios are at increased risk of having fetus with SUA. Increase in maternal age, multipara, habitual smoking, maternal use of antiepileptics such as phenytoin are associated with occurrence of SUA. They also have increased risk of chromosomal abnormalities and congenital malformations in fetus.5, 6 In our case the mother had pregnancy induced hypertension.

The common congenital anomalies associated with SUA is renal system followed by cardiovascular system and musculoskeletal system.7 Screening USG and Echo was normal in our case.

We thank the Faculty of Department of Pathology and Gynaecology of Sri Lakshmi Narayana institute of medical sciences Medical, Puducherry, for their support.

A A Hegazy Anatomy and embryology of umbilicus in newborns: a review and clinical correlationsFront Med20161032717