Follicular Cholecystitis (FC) is an extremely rare subtype of Chronic Cholecystitis (CC). It is characterized by hyperplastic lymphoid follicles along with prominent germinal centers. It constitutes about 2% of routine cholecystectomies. In this article, we report a case of FC in a 69 years lady. She had abdominal pain, clinically diagnosed as Calculus cholecystitis and managed by laparoscopic cholecystectomy. Grossly, thickening of the gall bladder wall was noted. Histopathological examination revealed gall bladder wall infiltrated by dense lymphoid infiltrate forming lymphoid follicles with prominent germinal centres. Hence, we rendered a diagnosis of FC. The purpose of presenting this case is to make pathologists aware about this entity. One should not mistake this lesion for lymphoma. A careful histopathological examination is diagnostic and Immunohistochemistry may be helpful in difficult cases.

Key Messages: Follicular Cholecystitis is extremely rare variant of Chronic cholecystitis. It is characterized by at least 3 Lymphoid Follicles per cm of Gall Bladder tissue with inflammatory infiltrate composed almost exclusively of scattered well-formed Lymphoid Follicles. Pathologist must be familiar with this entity to avoid misdiagnosis of lymphoma.

Gall bladder (GB) has become a frequent surgical specimen with the dramatic increase in cholecystectomies after the advent of laparoscopic surgery not only for cholecystitis and cholelithiasis but also for hepatobiliary surgery for other indications.1 Follicular cholecystitis (FC) is considered a distinct type of chronic cholecystitis, described initially in patients with Salmonella infection in early 1900s.1 FC constitutes about 2% of routine cholecystectomies.1 It is defined as at least 3 Lymphoid Follicles per cm of Gall Bladder (GB) tissue with inflammatory infiltrate composed almost exclusively of scattered well-formed Lymphoid Follicles. 1 Lymphoid hyperplasia, pseudolymphoma and follicular cholecystitis are some of the other synonyms for this lesion.2 The pathogenic basis is thought to be due to autoimmune mechanism or continuous inflammation, however the exact cause has not been identified.3 We present a case of FC in a 69 year old woman who underwent cholecystectomy for cholelithiasis.

A 69 year-old lady visited the surgery clinic with symptoms of right side upper abdominal pain since 6 months. On palpation, there was tenderness in the right hypochondrium and Murphy’s sign was positive. Her laboratory investigations showed mild Iron deficiency and neutrophilic Leucocytosis. The Ultrasonography revealed thickening of GB wall with few calculi and biliary sludge. Clinically she was diagnosed as chronic calculus cholecystitis. She underwent laparoscopic cholecystectomy and specimen was sent for histopathology. Grossly, GB measured 5.8x2.5x2cm. On opening, the lumen contained 4 small jet black stones, largest measuring 0.3x0.2cm. The GB wall was thickened. On histopathology, the GB wall showed focal ulceration of mucosa, thickened wall and dense and diffuse infiltration by lymphoid cells with formation of lymphoid follicles with prominent germinal centres. At places more than 3 lymphoid follicles with germinal centres per cm (in one area, even 5 follicles per cm) were found in lamina propria and muscular layer. (Figure 1). Hence, a diagnosis of Chronic follicular cholecystitis with cholelithiasis was made. 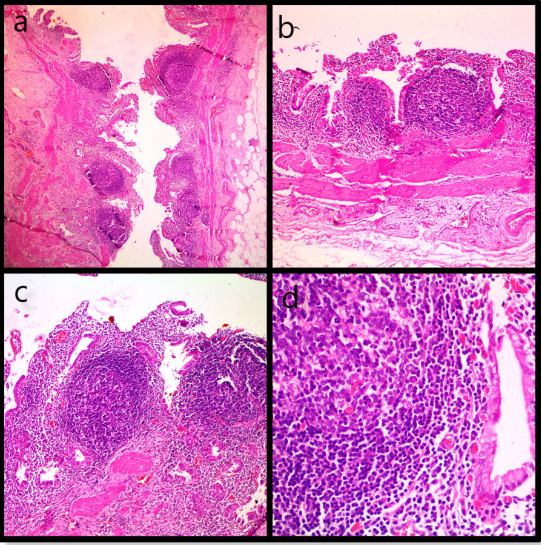 Lymphoid tissue in normal mucosa of the gall bladder is very sparse and lymphoid follicles are not seen. However, some intraepithelial lymphocytes are evident among the surface columnar epithelial cells. 2 Although scattered lymphocytes are commonly observed in GB specimens with likelihood of their focal increase within the GB epithelium in patients with chronic calculus cholecystitis, dense inflammation–forming follicles is a distinct histologic finding. Its frequency is relatively similar in different disease groups, suggesting that a factor independent of the established etiologies of cholecystitis may be playing a role in its pathogenesis but probably related to advancing age and some form of immune derangement. 2

Historically, FC has been associated with gram-negative bacterial infections, including Escherichia coli, Klebsiella pneumoniae, and Salmonella typhi. 5 FC was initially identified in relation to typhoid fever about a century ago. However, due to lack of uniform definitional histologic criteria, its reported incidence has been highly variable. 2

FC is a benign lesion characterized by hyperplastic lymphoid follicles with germinal centers in lamina propria throughout the gall bladder, most commonly seen in the mucosal layer. The Gall Bladders typically showed chronic changes including fibrosis, thickening, and frequent Rokitansky-Asschoff sinuses, but in many cases, there was a noticeable paucity of inflammation in the intervening tissue in between the follicles.4 Any distinct and relatively round cluster of lymphoid cells was regarded as a follicle even if their germinal center formation was not readily evident in the section, since many of these aggregates were confirmed to have CD21- positive cells by subsequent immunostaining. 1

In the study done by Salari et al., 5 43 cases of FC demonstrated that most cases had a co-occurring histology of Chronic Cholecystitis. He also stated that FC associated with Chronic Cholecystitis was relatively more common in females, as well as being strongly associated with cholelithiasis. The demographic profile and etiologic association reflect calculous cholecystitis. It is likely that the development of FC in this background is related to superimposed biliary tract obstruction by gallstones, either obstructing the cystic duct or bile duct. 5 Mahajan et al. has reported 4 cases of follicular cholecystitis and all cases were seen in females. The age of presentation was between 31-60 years. All cases were associated with gallstones. Three cases had pigmented stones and one had cholesterol stone.6 Similarly, our case too showed FC in association with cholelithiasis in a 69 years female patient.

Saka et al.1 analyzed 2550 cases of cholecystectomies and observed that FC is seen typically in older patients. They suggested a deranged immune response as a possible etiologic factor. A third of their patients revealed biopsy-proven gastritis. Interestingly, they also concluded that FC does not seem to be associated with autoimmunity, lymphoma, or obstructive pathologies, all observations somewhat contradictory to Salari et al.1, 5

Lymphocytic Cholecystitis (LC) is a histologic entity on the differential when considering a diagnosis of FC. LC is defined by the presence of a subepithelial band-like, dense infiltrate of lymphocytes while lymphoid follicles are characteristically absent. The clinical significance of this distinction is not clear, since etiologically both are related to distal biliary obstruction. However, FC may result from superimposed bacterial infections, an association that has been suggested in previous studies.5

Tomori et al.7 studied 1341 patients of which 11.8% of patients showed lymphoid follicles in the lamina propria of the gall bladder which later turned out to be diagnosed as low grade maltomas. Malignant lymphoma is an important differential diagnosis of reactive lymphoid hyperplasia and is always a possibility to be kept in mind although lymphoma is thought to be a primarily tumor of lymph node, a substantial proportion arises from other tissue. Most common lymphoma masquerading as cholecystitis are mucosa associated lymphoid tissue(MALT) lymphoma, follicular lymphoma, mantle cell lymphoma, & Chronic lymphocytic leukemia/Small lymphocytic lymphoma (CLL/SLL).3 The differentiation between reactive lymphoid hyperplasia and neoplastic lymphoid proliferation follows the same principles as in Lymph node and in difficult cases IHC can be utilized for differentiation.

On reviewing Indian literature on FC, we observed that, there are very few case reports of FC.2, 3, 4, 8 Mohan et al. 9 studied 1100 cholecytectomies in North india and reported a high incidence of 2.3% with 26 cases of FC. Mahajan et al.6 studied 656 cases of cholecystectomies and reported relatively low incidence of 0.61% (4 cases). Rana et al.3 reported a case of Lymphoid Hyperplasia which was initially mistaken for lymphoma, but subsequently diagnosed as FC on IHC.

We conclude that FC is an extremely rare entity which might be mistaken for lymphoma on morphology especially for a beginner. Hence, pathologist must be aware of this lesion. We emphasize that most cases of FC can be diagnosed on careful histopathological examination and in difficult cases, IHC can be very useful.

B Saka B Memis I E Seven B Pehlivanoglu S Balci P Bagci Follicular Cholecystitis: Reappraisal of Incidence, Definition, and Clinicopathologic Associations in an Analysis of 2550 CholecystectomiesInt J Surg Pathol202028882634