Cutaneous meningiomas (CM) are rare variants of meningiomas which are further classified into three subtypes. Type I CM (TICM) or Rudimentary meningocele (RM) is an uncommon developmental anomaly in which meningothelial elements are displaced into the skin and soft tissue. We present a case of 11 year boy with an upper back swelling since early childhood. His MRI spine showed a lesion at T4-T7 level with a fistulous tract connecting it to dural sac. Histopathology revealed clusters of oval to spindle cells arranged in whorls amidst collagen bundles and psammoma bodies. On immunohistochemistry these cells expressed EMA and Vimentin. A diagnosis of TICM was rendered based on these characteristic clinico-radiological & histopathological features. TICM pose a diagnostic challenge clinically and histopathologically and have an excellent prognosis. This is the 4th Indian case of RM and the 1st case of RM to be located in the spine in the Indian literature.

Meningiomas are the most common intracranial extra-axial neoplasms.1 They arise from arachnoid cells and are found in the convexities of hemispheres of the parasagittal region. Cutaneous meningomas (CM) are a small subset of meningiomas accounting for less than 2% of cases. 2 They are further classified into three subtypes. Type I CM (rudimentary meningocele) are congenital lesions derived from ectopic arachnoid cells, type II are derived from arachnoid cells surrounding nerve bundles, and type III are direct extensions or metastases of dural-based neural neoplasms.3 We report a case of type I CM (TICM) in an eleven year old boy.

An 11 year old boy presented with a swelling in the upper back since early childhood. There was no history of pain or trauma. His physical examination revealed a sinus tract in the midline of the dorsal thoracic region. His neurological examination was normal. MRI Dorso-lumbar spine was performed which revealed a well defined T2 hyperintense collection measuring 3x2x1.8 cm in midline back region from T4-T7 vertebral levels. A small fistulous tract was noted from the cranial portion of the collection which was communicating with the spinal canal/ dural sac via dural defect at T4 level- suggestive of dorsal dermal sinus. Also a syrinx was noted at T3 & T4 levels (Figure 1a-c). The dorsal dermal sinus was excised along with the swelling and subjected to histopathological examination.

Grossly, we received a piece of reddish brown tissue

Microscopy demonstrated an ill-defined mass composed of densely hyalinized fibrocollagenous proliferation intermingled with strands and clusters of oval to spindle or epithelioid cells with uniform round to oval nuclei and pale eosinophilic cytoplasm, arranged in whorls. Few collagen bodies (rounded fibrocollagenous structures) and psammoma bodies permeated the mass (Figure 2a-d). On immunohistochemistry (IHC), these cells expressed EMA and Vimentin and were immunonegative for CK, S-100, CD34 and SMA (Figure 3a-d). A diagnosis of TICM or rudimentary meningocele was rendered based on these characteristic clinico-radiological & immunohistochemical features. 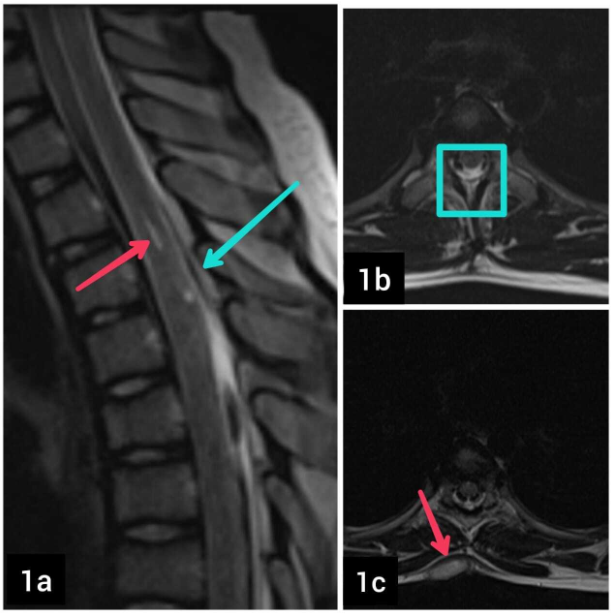 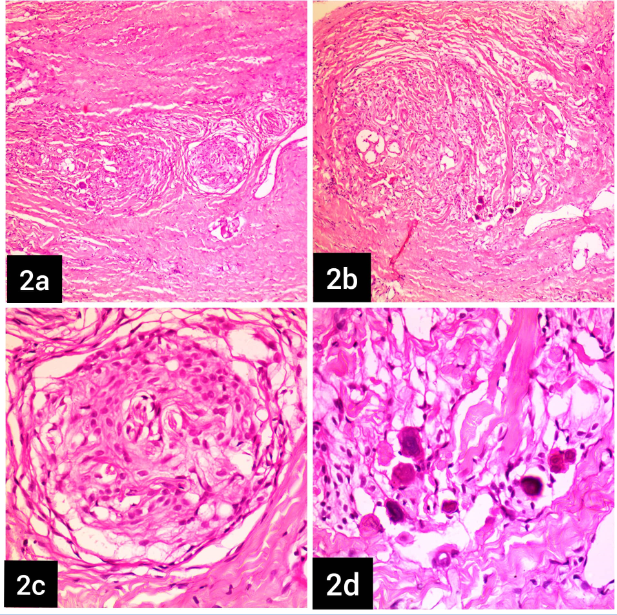 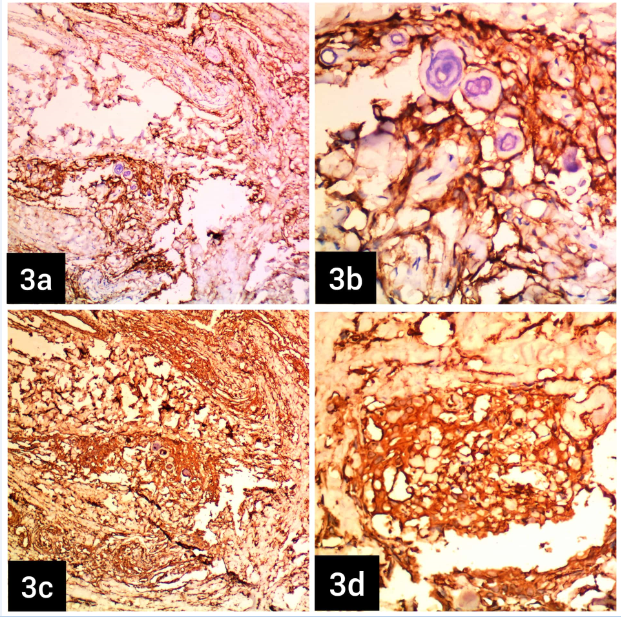 Summary of the cases of spinal rudimentarymeningocele

Meningiomas are the commonest primary benign neoplasms originating from the arachnoid cap cells.2 They form around 15% of surgically intervened CNS neoplasms. They usually occur in adults and with the exception of congenital meningiomas, they are rare in childhood. 11 Meningiomas are usually intracranial extra-axial in location, but few rare extracranial variants are also noted. 1 In the 1730s, the first case of extradural meningioma was documented.2 Extracranial meningiomas can occur due to 1) direct spread of the CNS meningiomas into the surrounding tissues, 2) as metastatic meningiomas or 3) primary ectopic meningiomas. 11

Ectopic meningiomas occur at scalp, head, neck, orbit, ear, lung, mediastinum etc. and have different clinicopathological findings and prognosis as compared to the intracranial ones.11, 8

Cutaneous meningiomas are the meningiomas that occur in skin and subcutaneous tissues, which can be primary involvement or secondarily due to extension of intracranial meningiomas and account for less than 2% of the cases. 2, 11 This lesion was first reported in 1904 but it was first described in the English literature in 1956.12 These subset of meningiomas usually follow trauma, present as subcutaneous nodules and can be clinically misdiagnosed as lipomas or sebaceous cysts. They have a propensity to grow even more rapidly following radiotherapy or surgery.1

Cutaneous meningiomas have been subclassified into three subtypes based on clinicopathological presentation by Lopez et al in the year 1974. Type I CM- congenital, seen in younger age and arise from ectopic extracranial arachnoid cells. Type II CM- seen in adults, arising from arachnoid cells lining cranial and spinal nerves. Type III CM- direct extension of the intracranial meningiomas to the exterior.3

Clinically the lesions are painless, light to dark firm subcutaneous nodules that may be alopecic or have hypertrichosis.12 As these lesions are rare and they don’t have a definite characteristic appearance, cutaneous meningiomas can be clinically confused as various cysts, epithelioid sarcomas, hidradenomas, fibromas, adnexal lesions, neuroectodermal tumors, metastatic lesions.13, 14 Thus it is imperative to subject tissue for histopathological examination and IHC should be performed wherever indicated.

Grossly they are similar grey white, firm subcutaneous nodules. They may demonstrate alopecia or hypertrichosis. They may involve the soft tissue, fascia or bone depending upon the depth. Type II and III lesions may erode the bone. 12

As the clinical and radiological picture is most of the times non-diagnostic, histopathology plays a crucial part in diagnosis. Meningothelial cells in nests, sheets or lobules with collagen bodies or psammoma bodies are useful clues. 14 IHC should be performed wherever necessary. These cells are EMA and vimentin positive and negative for CK, S100, CD34, CD31, CD68, SMA and desmin thus excluding other origin of cells. 14

Type I CM or Rudimentary meningocele (RM) is a rare developmental anomaly characterized by a mass in the posterior midline along the craniospinal axis. 7

Sibley et al in 1989 described 5 cases of RM and concluded that these lesions lacked the nodular & sheet-like growth pattern typical of central nervous system meningiomas and most primary ectopic meningiomas. They further suggested that these lesions are closely related to meningoceles and should be viewed as developmental anomaly rather than neoplasms.11 In 2001, Shabrawi-Caelen described 13 cases of RM, 2 of which were located in the posterior midline spine, rest all being over scalp. 9

On reviewing the literature, most of the cases of RM were located on the scalp with very few cases located in the spinal region. We extensively reviewed previously reported cases of spinal RM and found total 9 cases which are summarized in Table 1. 2, 8, 9, 7, 4, 5, 6, 10 We observed some unique features common to all like-a) communication in the form of cord or a tract between the mass and the dura or spinal cord / phylum terminale, b) histopathology comprising of strands and whorls of meningothelial cells, psammoma bodies and collagen bodies and c) no recurrence post excision. Our case also presented as a dorsal dermal sinus which showed psammoma bodies within the collagenous stroma hence posed a diagnostic difficulty. Careful histopathological sections of deeper sections revealed of strands and occasional whorls of meningothelial cells. IHC confirmed the meningothelial nature. Unawareness of this entity at this unusual site may lead to overlooking of meningothelial cells thus causing underreporting and misdiagnosis. On the other hand, these cells may infiltrate in strands along the vessels which may give a false impression of invasion and lead to over-reporting as malignancy.

Associations of cutaneous meningiomas have been found with breast carcinomas, neurofibromatosis and pheochromocytomas. 1, 2, 12 It is proposed that these tumors grow in presence of increased endogenous steroids like estrogens. 1, 2 Hence on diagnosis of CM wherever clinically indicated, further investigation is recommended. 2

Treatment for cutaneous meningiomas is surgical resection and prognosis depends on the type. 12 Type I lesions have a very good prognosis. Type II and III lesions have a poorer prognosis and for surgically inaccessible tumors, radiotherapy forms the mainstay. 1 Vascular endothelial growth factor inhibitors and Platelet-derived growth factor inhibitors are under trial for treatment of such tumors. 12, 14

To conclude, cutaneous meningiomas need to be radiologically investigated, surgically treated and prognostically classified into one of the three types. As rudimentary meningoceles (Type I CM) are rare lesions, it is important to be aware of such an entity. Presence of psammoma bodies should alert the pathologists of possibility of RM and aid of IHCs should be taken if needed. The patient should also be further evaluated for the associations.

The authors certify that they have obtained all appropriate patient consent forms. In the form the patient has given his/her/their consent for his/her/their images and other clinical information to be reported in the journal. The patients understand that their names and initials will not be published and due efforts will be made to conceal their identity, but anonymity cannot be guaranteed.