Aims: This study discusses the spectrum of FNAC of soft tissue lesions in upper and lower limbs.

Methods and Materials: All cytology smears of soft tissue lesions from both upper and lower limbs were included over a period of three years at tertiary care hospital.

Conclusions: FNAC of soft tissue lesions is useful for differentiating various lesions and neoplasms in extremities so as to help patients in further management.

Soft tissues are the nonepithelial, extraskeletal structures and thus form the supportive tissue of various organs. Soft tissue lesions have a large heterogeneous spectrum which includes non- neoplastic, benign and malignant lesions. The benign soft tissue tumors are about ten times more common than that of malignant ones.1 Among benign tumors, lipoma is the commonest soft tissue tumor.2 Fine needle aspiration cytology (FNAC) is a painless, easily performed, rapid, safe, and cost effective diagnostic tool in the initial categorization of tumors. It is fairly specific and sensitive in the diagnoses of primary, recurrent, and metastatic tumors.3 FNAC offers several advantages as it can provide a predictive diagnosis of a benign or malignant soft tissue neoplasm and thus helps in further intervention management.

FNAC is used as a first line investigation for tumors of breast, thyroid and lymph nodes, but for diagnosis of soft tissues tumors (STT), its role is still debated. 4, 5 In STT, FNAC plays main role for detecting suspicious recurrences or metastases. For a variety of reasons, FNA cytopathology of soft tissue remains controversial across the world. This study will discuss the spectrum of fine needle aspiration cytology (FNAC) of soft tissue lesions specifically in upper and lower limbs, including reactive non-neoplastic and neoplastic lesions over a period of three years at tertiary health care center. We also tried to correlate with the histopathology results depending upon the availability. Thus, we attempted to assess the utility of FNAC for practical purpose in soft tissue lesions of extremities.

This retrospective study was undertaken in the cytology section of Department of Pathology at tertiary care hospital. Local ethical committee sanction was obtained. The study included the cytology smears of soft tissue lesions of both upper and lower limbs received in cytology section over a period of three years from January 2017 to December 2019. Informed consent were already taken before performing each FNAC. Cases of lipoma and epidermal cysts which formed the majority of the bulk were excluded. The soft tissue lesions included neoplastic as well as non-neoplastic lesions from upper and lower limbs. Neoplastic tumors were further categorized as benign, malignant and suspicious for neoplasm. Non-neoplastic lesions included infectious and inflammatory lesions. FNA was done with 23/24G needle attached to 10mL disposable plastic syringe and material was divided into two equal parts. The air dried smears were stained with Giemsa stain and 95% ethanol fixed smears were stained with Papanicolaou stain. The cytology smears were studied and categorized as non-neoplastic, benign, malignant and unable to categorize, along with specific subtyping of the lesion. The diagnostic FNAC results from patients who underwent a subsequent surgical excision were compared for diagnostic concordance using histological parameter. For statistical purpose, SPSS software was used for analysis.

Total 408 patients visited cytology section for FNAC of soft tissue swellings of extremities over a period of three years from January 2017 to December 2019. Of these, 244 cases of lipoma (184 in upper limbs and 70 in lower limbs) and 94 cases of keratinous cysts (42 in upper limbs and 52 in lower limbs) were excluded. Thus total 70 cases were included in this retrospective analysis with male to female ratio being 1.3:1. The age of patients vary from minimum of 8 years to the maximum of 80 years. The most common age range belonged to 31-40 years with the mean age being 43 years. 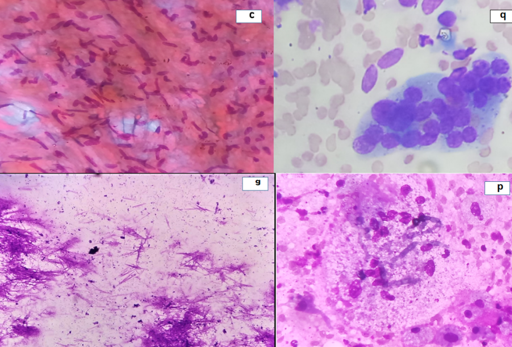 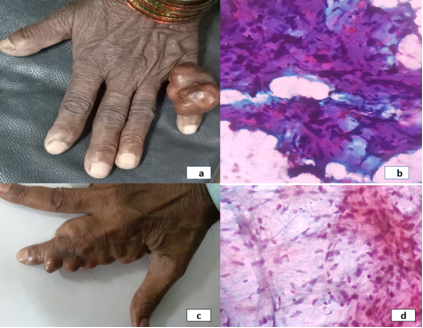 Age and sex-wise distribution of cases:

Distribution of cases in male and females compared with upper & lower extremities:

Cytology diagnoses of cases in upper and lower extremities:

Cytology diagnosis of lesions in hand and feet:

[i] # One case labelled as suspicious for low grade sarcoma on cytology was reported as synovial cyst on follow up.

[ii] $ One case of fungal infection on cytology was reported as necrobiotic granuloma on histopathology. Special stains for fungus were negative.

Histopathological follow up of soft tissue swellings of extremities:

[i] *Two cases showed minor discordance, one reported as benign fibrohistiocytic lesion on cytology turned out to be lipoma while other case reported as neurogenic tumor was pilar leiomyoma on histopathology.

Histopathological follow up was available in 44.3% of cases with 80.6% concordance rate [Table 5]. In addition, 3 cases had clinical follow up where in patients had not operated but the swelling remained of same size.

FNAC has several advantages over open biopsy due to its cost-effectiveness and yields. Also its turnaround time helps in rapid diagnosis. It can also be used as an alternative for excision biopsy of soft tissue tumors as a diagnostic workup.6

Also, multiple passes performed during FNAC in various directions of the swelling helps to cover almost all representative areas of tumors helps in diagnosis.7 But in soft tissue tumors, role of FNAC in primary diagnosis is bit controversial. The reason being cellular composition heterogeneity, soft tissue tumors can be a source of diagnostic confusion and consternation. So it needs good experience and further studies. Cytopathology diagnosis of soft tissue is bit challenging aspect but FNAC is very useful to differentiate benign from malignant soft tissue tumors. Though exact categorization may not be possible. Although FNAC at least helps to differentiate primary malignant soft tissue tumors from benign lesions and also other malignancies like carcinoma, metastasis and lymphomas and dermal appendegeal tumors.

Roy et al.8 observed that benign STT were relatively common above third decade of life, while the present study they were common in 2-4th decade.

In the present study we have found 18% benign spindle cell tumor. Tailor et al found 8.57% were diagnosed as benign soft tissue lesions. 12 Benign Nerve Sheath Tumor includes schwannomas and neurofibromas which are commonly aspirated for diagnosis. Aspiration from neurofibromas is usually painful. Smears show spindle cells having moderate cellularity in fibrillary background is common in both schwannomas and neurofibromas.13 It is noted that Nuclei of both tumors have tapering ends and have a buckled appearance. The nuclearpalisading (or Verrocay bodies) favors a schwannoma over a neurofibroma but FNAC cannot help make this distinction between the two and cannot be reliably made in its absence. 14

Many times FNAC helps to differentiate benign from malignant rather than a precise histological diagnosis. It is mainly based on cellularity, nuclear pleomorphism, mitosis, and necrosis. Careful evaluation is necessary to distinguish a low-grade sarcoma from a benign spindle cell neoplasm.4

Aspirates from malignant soft tissue tumor show spindle cell fragments with high cellularity and/or nuclear pleomorphism, hyperchromatic nuclei or anisonucleosis, mitotic figures. Necrosis may be present. Any one of the above features should prompt an inconclusive report making histological examination mandatory for definitive diagnosis. 14 In our study we found 15.7 % (11/70) malignant tumors diagnosed on FNAC which included 3 cases of Melanoma, 7 sarcoma, and 1 was hematolymphoid malignancy.

In conclusion, FNAC of soft tissue lesions of extremities has a fair sensitivity and specificity when done by experienced cytopathologists and it has definite role for the management of the patient regarding further treatment or intervention.