Introduction: Allergic rhinitis (AR) is one of the most common disease in India. The association between eosinophils and allergic diseases has been known since many years.

Materials and Methods: This is one-year prospective study in patients (n=60) presented with allergic rhinitis to our institute. After taking consent, all the study participants were subjected for blood AEC, IgE levels and nasal smears for eosinophils.

Results: Among the samples, 81.7% were males. The mean age of patients was 35.2 years. AEC > 440 cells/cu.mm was seen in 46.6%, NSE>10% in 81.6% and total serum IgE was elevated > 100 IU/ml in 95.0%. There was a good correlation of NSE and serum IgE with the severity of disease. There was no correlation of blood AEC with the severity of clinical score. Data was analysed using SPSS software.rn

Conclusion: NSE and IgE both correlated well with severity of the disease. Nasal smear cytology is a simple procedure having good correlation with severity of clinical score should be used routinely. Testing for serum IgE levels will increase the accuracy with a better diagnostic utility.

Allergy is a rapid immunologic reaction occurring in a previously sensitized individual that is triggered by the binding of an antigen to IgE antibody on the surface of mast cells. 1 The association between eosinophils and allergic diseases has been known since many years. 2 Allergic rhinitis (AR) is one of the most common disease in India. 3 Allergic Rhinitis is a clinical condition which involves nasal mucosal disorder induced after allergen exposure resulting from an IgE-mediated inflammation of the membrane of nose.4 Allergic Rhinitis is a global health problem, which results in significant disability worldwide. It cuts across all ages, ethnic groups, socioeconomic status and countries, estimated to affect about 10 – 25% of World population (> 500 million people).3 The prevalence of allergic rhinitis in India is 10-20% and has increased during the last two - three decades and it continues to increase. 5 AR impairs the quality of life and leads to significant expenses for its treatment and care. 6

The presence of 2 or more allergic symptoms, occurring for more than one hour on most days is suggestive of allergic rhinitis. These symptoms include, watery rhinorrhea, sneezing (often paroxysmal), nasal obstruction (usually bilateral), nasal itch, with or without conjunctivitis.7 Most AR patients can be diagnosed by a combination of history, clinical examination and allergy tests such as skin prick test, radioallergosorbent test for specific IgE, absolute eosinophil count (AEC), total serum IgE level, and nasal cytology for eosinophils.8 An absolute eosinophil count is a blood test that measures the number of one type of white blood cells called eosinophils. Nasal smear cytology for eosinophils is an objective investigation, which involves the laboratory preparation and subsequent analyses of nasal scrapings from the inferior turbinate with the aim of determining the eosinophil count and categorizing such patients based on the amount seen microscopically. Nasal smear cytology has been found to be a useful diagnostic test with a moderately high sensitivity and a high specificity. 9

An immunoglobulin E(IgE) test measures the level of IgE, a type of antibody. Elevated concentrations of IgE are generally thought of in context of allergic disease.

The current study is a one-year prospective study from June 2020 to May 2021. The sample size is 60. Patients with clinical diagnosis of allergic rhinitis who came to Pathology department from the department of ENT were included as study participants. The patients who are on Anti-histamines and known asthma cases were excluded from the study.

Correlation of NSE and serum IgE with clinical severity score 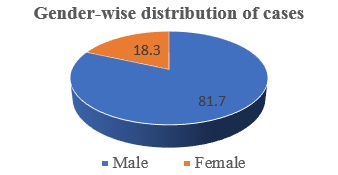 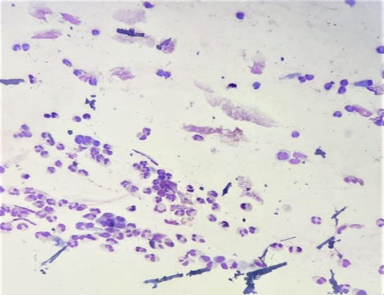 Majority (51.7%) of the patients were between 31-40 years in our study whereas in a study by Prabhakaran J et al 12 majority (43%) of patients were between 15-30 years. Males were more in number as study participants constituting 81.7% whereas in a study by Prabhakaran J et al 12 56% were males. Mean Absolute eosinophil count in the present study was found to be 753.95 cells/cu.mm whereas in study by Agarwal A et al 6 it was 553cells/cu mm. Mean Serum IgE was found to be 586 IU/ml concordant with findings by Agarwal A et al 6 where mean Serum IgE was 603.7IU/ml. Highly varied values were seen across various other studies conducted. 13 There was no correlation of blood AEC with severity of clinical score in our study. Similar observation was made by Anand K Patel et al study. 14

Like in our study, in a study by Berkiten G et al, 15 there was a positive correlation between nasal eosinophilia score and Total Nasal Symptom Score (r = 0.652; p < 0.05) in persistent allergic rhinitis and intermittent allergic rhinitis patients. In a study by Prabhakaran J et al 12 the clinical severity had a strong positive correlation with nasal smear eosinophil count (p value 0.001) when compared with that of blood absolute eosinophil count (p value 0.062).

NSE and IgE both correlated well with severity of the disease. Nasal smear cytology is a simple procedure having good correlation with severity of clinical score should be used routinely. Testing for serum IgE levels will increase the accuracy with a better diagnostic utility.