Detection of Antinuclear antibody (ANA) is the hallmark of laboratory investigations in Connective Tissue Disorders (CTD). However, various methodologies used in both screening tests and specific antibody detection has led to a loss of consensus and poor reproducibility of results. The objective of this study is to compare Solid Phase Immunoassay (SPI) with Indirect Immunofluorescence (IFA) as a screening test in correlation with the clinical profile as well as subsequent detection of specific antibodies. The study was conducted as a pilot study with a sample size of 60 cases, recruited by Rheumatologists, between April 2019 to July 2019. Each sample was screened by IFA and SPI and tested for specific antibodies by three different specific antibody tests. Although the Sensitivity of SPI (71%) was lower when compared to IFA (79%), the Specificity (78%), Positive Predictive Value (PPV) (74%) and Negative Predictive Value (NPV) (76%) were all comparatively higher. In two clinically proven cases of Sjogren’s syndrome where IFA was negative and SPI was positive, specific antibody tests showed positivity for SSA/Ro. Also it was seen in two clinically confirmed cases of Systemic Lupus Erythematosus IFA was positive and SPI was negative. In this pilot study SPI appeared comparable to IFA as a screening test with better specificity, PPV and NPV. The utility of SPI was especially seen in cases with antibodies against SSA/Ro where IFA may be negative. However, in a few cases of high antibody titer SPI appeared to give a false negative result.

Antinuclear Antibody (ANA) testing is widely used as a screening test in Connective Tissue Diseases (CTD) such as Systemic Lupus Erythematosus, scleroderma, CREST syndrome (calcinosis, Raynaud’s phenomenon, esophageal motility abnormalities, sclerodactyly, and telangiectasia), Sjogren’s syndrome, mixed connective tissue disease (MCTD), polymyositis, and dermatomyositis. However, positive ANA results are seen in a significant proportion of the elderly population 1, 2, 3, 4 and the sensitivity of ANA testing varies widely from one clinical disease to another. 5 Indirect Immunofluorescence Assay (IFA) has been the gold standard for screening of ANA since its discovery more than 50 years ago. 6, 7 However, the IFA method is influenced by cell type, fixation procedure, dilution of patient serum, inspection time, day-to-day performance, the experience level of the microscopist, and the microscope itself. 8, 9 To overcome these issues, enzyme immunoassays including Solid Phase Immunoassays (SPI) were developed. 10, 11, 12 Several ANA antigens have been identified, and quantitative SPIs have been developed using either purified extracts or recombinant antigens. Most of the early manual SPI techniques have been widely replaced by automated versions. These newer methods are amenable to modern laboratories with high-throughput platforms, and they provide quantitative, reproducible results with minimal hands-on time and require less operator skill. In contrast to classical IFA methods using HEp-2 cells, which contain several hundred different antigens, the reactivity of SPI methods is limited to the relatively few individual antigens included in the assays. Although this factor may reduce SPI reactivity to some relevant antigens, it could also diminish reactivity toward irrelevant antigens. 13 The various methodologies discovered both as a screening test and to test for specific antibodies have led to a gamut of choices but without any consensus.

The objective of this study was to compare IFA and SPI as screening assays along with tests for specific antibodies in the context of the clinical diagnosis and propose a laboratory diagnostic algorithm.

The study was designed as a prospective study between April 2019 to June 2019. Four Rheumatologists recruited subjects based on inclusion and exclusion criteria and samples were sent to the testing laboratory. All samples were tested by two screening assays and three assays for specific antibody tests. The screening assays used IFA as one method and Fluoro Enzyme Immunoassay (FEIA) as the method of choice for SPI. For specific antibody tests, Line Immunoassay (LIA), Enzyme-linked immunosorbent assay (ELISA) and FEIA were used as the three methodologies.

Total of 60 subjects were recruited.

The inclusion criteria for the prospective study period was defined as a Patient, of age more than 18 years, with clinical signs and symptoms of Systemic Rheumatic Disease.

The 60 subjects recruited by Rheumatologists had a 1:4 Male to Female ratio with age distribution from 24 to 76 years. Out of the 60 cases, 38 were disease positive with 10 cases of SjS, 13 cases of UCTD, 13 cases of SLE and 2 cases of MCTD. The sensitivity, specificity, PPV, and NPV of the screening tests were compared (Figure 1). Although the results showed IFA to be a more sensitive test, the CTD Screen assay had better specificity, PPV and NPV. When we looked at the disease negative group (22 cases), CTD Screen had a lower false-positive rate (23%) than IFA (45%). The specific antibodies detected by three different methodologies were clustered against the disease groups (Table 1 and Figure 2 ). For statistical analysis, we chose SjS and SLE as disease groups to compare the different methodologies for detecting dsDNA, Sm and SS-A/Ro as these antibodies were part of the classification criteria - ACR/EULAR 2016 criteria for Sjogren’s syndrome 6 and SLICC 2012 criteria for SLE. 7 The results (Table 2) showed that for dsDNA, monospecific assays like ELISA or FEIA have a better detection rate than LIA. For Sm and SS-A/Ro, all three methods were comparable. While reporting the clustering of antibodies into disease groups, an antibody was considered to be non-specifically positive if it was found to be positive across all disease groups. U1RNP showed non-specific positivity across all disease groups along with SS-A/Ro and SS-B/La (Figure 2). Sm and Ribosomal P Protein were found to be clustered only to the SLE group (Figure 2). Antibody against Centromere proteins was found to be associated with UCTD as well as SLE. Antibody against Jo-1 and Scl 70 were found to be negative across all disease groups. In the disease negative group, SS-A/Ro, SS-B/La, dsDNA, and U1RNP antibodies were found to be positive. Out of these, isolated U1RNP positivity on LIA was the most consistent pattern (6 out of 22 cases). SLE and UCTD showed positive results for the largest group of antibodies among the disease groups. 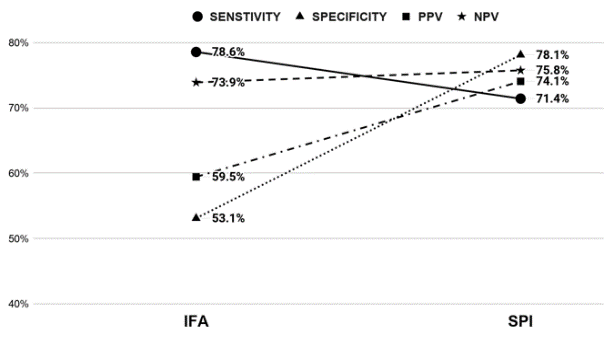 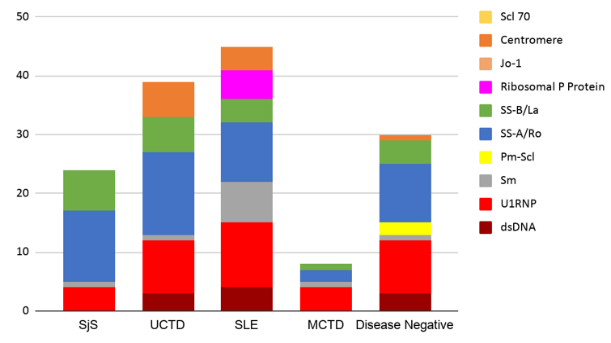 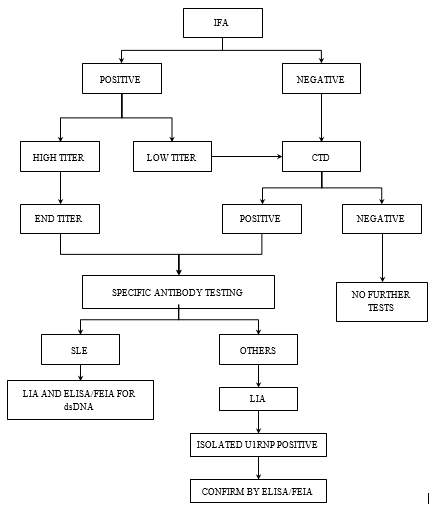 Comparison of the present study with other studies.

Comparison of the Screening Tests: The American College of Rheumatology had released a position statement titled “Methodology of Testing for Antinuclear Antibodies.” in 2011 which was reapproved by the board of directors in 2015. Although the statement supported immunofluorescence antinuclear antibody (ANA) test using Human Epithelial type 2 (HEp-2) substrate, as the gold standard for ANA testing, it also included a review of the literature related to clinical testing for ANAs, along with several recommendations for laboratories. One of these recommendations is that laboratories using newer methods need to provide data to physicians regarding clinical sensitivity and specificity of the chosen method in comparison to the traditional IFA. In our study, we have tried to fulfill that recommendation. When we compared the traditional IFA with newer SPI (CTD Screen) as a screening test for ANA, the results showed that IFA to be more sensitive than SPI but with lower specificity, PPV and NPV. These results were consistent with the studies carried out by Gniewek et al. 5 and Deng et al. 14 (Table 3). The results of our study showed that the use of IFA could still be considered the gold standard (highest sensitivity), but concurrent testing with SPI screen yielded a better specificity, PPV and NPV. This was particularly important in the disease negative group where the false-positive rate of IFA (45%) was much higher than CTD (22%).

Comparison of the specific tests: The results showed that LIA, ELISA and FEIA were comparable for the detection of specific antibodies in all the antibodies tested, except for dsDNA and U1RNP. In the case of dsDNA, monospecific assays like ELISA and FEIA showed better detection rates in patients with SLE. For U1RNP, LIA showed a very high false-positive rate in the disease negative group.

With the results of the above study and review of the literature, we recommended a diagnostic algorithm for detecting autoantibodies (Figure 3).

The diagnosis of Systemic Rheumatic Diseases is a clinical diagnosis with serological testing for Autoantibodies playing an adjunct role in confirming the diagnosis or as prognostic markers. With the development of new solid-phase assays, there is a lot of debate surrounding Indirect Immunofluorescence being the gold standard screening test. The various methodologies available for specific antibody tests have also added to this confusion. In our study, we have tried to objectively look into these methodologies with respect to the clinical diagnosis. Our findings from the study have led us to an algorithm based approach which maximizes the potential of each technique with specific recommendations of specific antibodies which will ultimately bring down the economic burden. In the end, we conclude by acknowledging that this is a pilot study with 60 samples from an Indian population and the requirement is to further test this algorithm and come up with recommendations for using solid-phase assays in concordance with Immunofluorescence.