Background: Salivary gland neoplasm are rare and constitute about 3% of all head and neck neoplasms. Mucins are altered in pathological states and are stained by special stains like Periodic Acid Schiff, Alcian Blue and Mucicarmine.

Objectives: To study the histomorphology of resected salivary gland tumors and mucin staining pattern wherever indicated.

Materials and Methods: Surgically resected specimens received at our tertiary care hospital and subjected to histopathological examination. Specimens were fixed in 10% formalin, processed and embedded in paraffin blocks, serially cut to get sections of 3-5 microns thickness. Stained with hematoxylin and eosin for all. Mucin stains were used wherever applicable.

Conclusion: Salivary gland tumors have complex range of morphological spectrum. Histopathological examination is the golden standard for diagnosis and mucin stain would add as an adjunct to the diagnosis.

Salivary glands are distinctive amongst the secretory glands, with most heterogeneous group of tumors, exhibiting complex and wide histological diversity.1 These are exocrine in nature categorized into major and minor salivary glands. Tumors arising from salivary glands, constitute approximately 1% of all neoplasms in the body and 3–6% of all head and neck tumors with an estimated worldwide incidence of 0.4– 13.5 per 1,00,000 population. 2, 3 About 70 - 80% of tumors arise from parotid gland, 7- 10% are located in submandibular gland, the remaining are in sublingual and other minor salivary glands.4, 1 Tumors that arises from parotid, only 15-30% are malignant. More than 50% of those arising in the submandibular or sublingual glands are malignant. 5

Salivary glands are tubuloacinar exocrine organs responsible for production of saliva. 2 Mucins are main component of saliva composed of complex carbohydrates with sugar moieties and amino acids. 6 Glandular secretions protects the mucosa of the oral cavity which are mainly serous and mucinous in nature rich in mucosubstances. 7 Any change in mucin pattern may induce disease or malignant process. Mucin can be are categorized into acidic (sulphomucin and sialomucins) and neutral mucins stained by various methods such as periodic acid schiff (PAS), mucicarmine, alcian blue (AB) and in combination. 6, 8

Hematoxylin and Eosin (H&E) is considered to be the gold standard in diagnosis of salivary gland tumors. Most patients with benign tumors present with painless swelling of the gland involved. Neurological signs, such as numbness or weakness caused by nerve involvement, indicate a malignancy. The prognosis is most favorable when the tumor is located in the parotid gland, 2nd favorable site been submandibular gland, the least favorable sites are the sublingual and minor salivary glands.[2.9]2, 9

It is a Prospective observational study. salivary gland specimen received at Department of pathology, done at our tertiary care center between November 2018 to June 2021 were taken for the study. Ethical committee clearance was obtained before the study.

Salivary gland specimens were obtained after written and informed consent. Details of clinical data and investigations performed collected for available cases from histopathological requisition form. All specimen were fixed in 10% Formalin for a period of 10 – 12 hours. Specimens gross and cut surface examined for size, shape, color, circumscribed or infiltrative borders and presence of cystic changes were noted. The sections were taken from the lesion, its margins, surrounding tissues.

Tissues were processed, embedded in paraffin and sections were cut at 3-5 microns thick and were stained with Haematoxylin and Eosin. Selected cases special stains like Periodic acid Schiff (PAS), Alcian blue (AB) and Mucicarmine (MC) stain were also done, slides were examined. The details of cellular pattern, encapsulation, perineural and vascular invasion with mucin staining pattern was observed. The tumors were studied according to World Health Organization’s histologic typing of salivary gland tumors 4th edition. 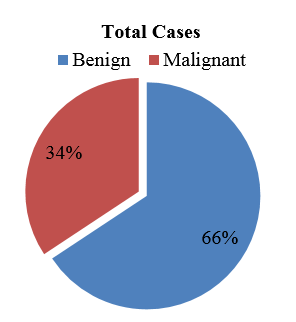 As depicted in Figure 1 Salivary gland neoplastic lesions, tumors were presented over a wide range. The mean age for benign tumor was 43.39 years, malignant tumor was 49.95 years. In this study the youngest patient was 1 year and the eldest was 71 years of age.

Graph showing male and female distribution according to age. 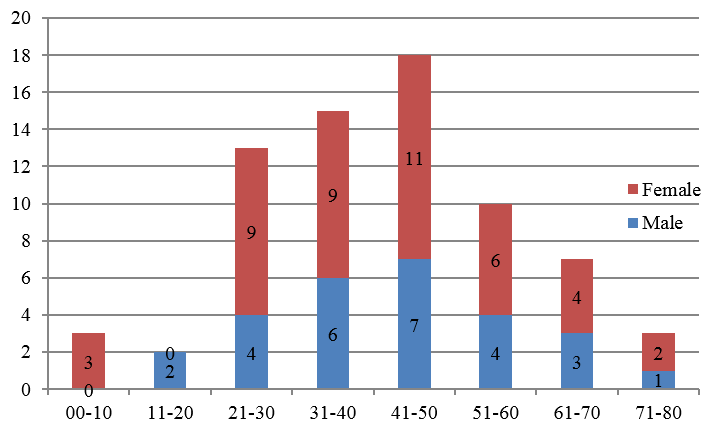 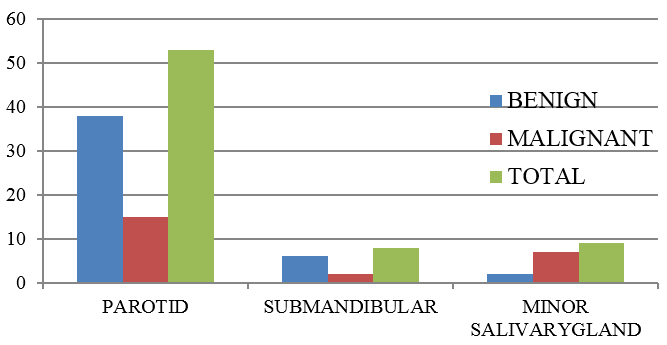 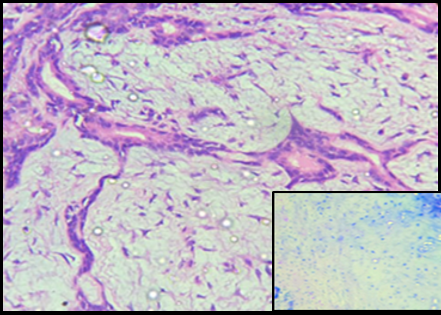 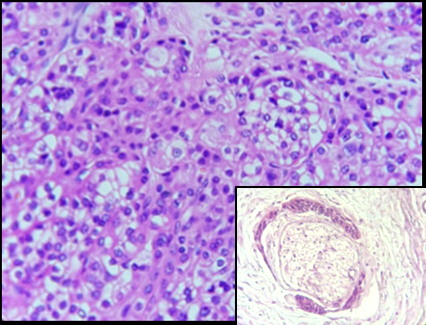 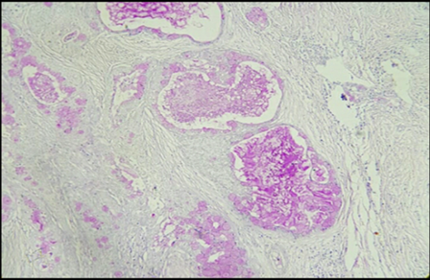 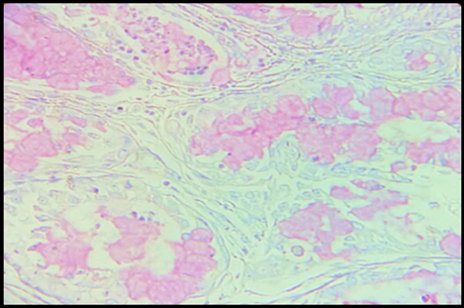 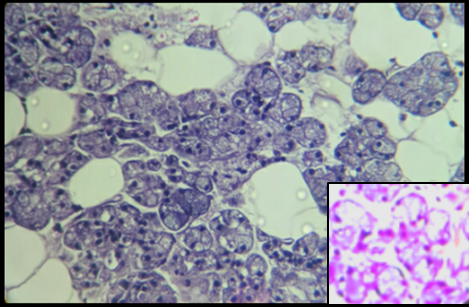 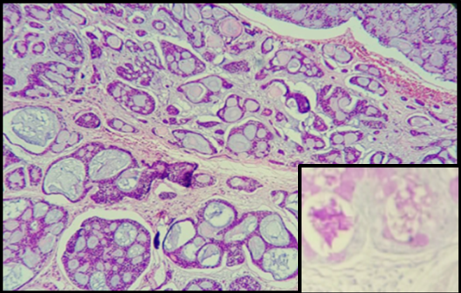 The PAS stain showed a strong reaction with the mucinous material in the tubules and myxoid arrears. Alcian blue stain was positive for chondromyxoid areas in Pleomorphic Adenoma. These result were similar to the studies done by Naag et al 6 and Azzopardi and Smith. 17 The mucous cells and lumen of MEC showed positivity to MC PAS and AB indicating presence both sulphomucins and sialomucins similar results were observed by naag et al. 6 One rare case was encountered in the study which was clear cell variant of MEC with positive to only PAS stain similar to results was made by Ogawa et al.18 AdCC showed positive for PAS and AB similar result was obtained by naag et al. 6 While ACC showed PAS positive granules were seen in the cytoplasm of the tumor cells.