Materials and Methods: A total of 30 nonneoplastic lesions of large intestine were studied over a period of 3 years. Both resected specimens and endoscopic biopsy specimens were included. Histopathological findings were studied along with analysis of the distribution of lesions and correlation of the histopathological findings with clinical parameters.

Results: The lesions were distributed in all age groups, with maximum frequency in 5th to 8th decades. The frequency was significantly higher in males (23 cases- 76.7%) as compared to females (7 cases- 23.3%). The most common lesion was perforation (10 cases), followed by gangrene (4 cases). Two cases had gangrene with perforation. Other lesions included Hirschprung’s disease (5 cases), Crohn’s disease (two cases) and one case each of Enteric duplication cyst, tuberculosis, amoebic colitis with perforation and Peutz-Jeghers polyp. Three cases had nonspecific inflammation.

Conclusion: Our study emphasizes the importance of histopathological examination in the management of colonic lesions

This is a histopathological study of nonneoplastic lesions of large intestine carried out at our tertiary care teaching hospital after approval by ethics committee.

All resected specimens and endoscopic biopsies of nonneoplastic lesions of large intestine of all ages and both genders were included in the study.

Neoplastic lesions were excluded from this study.

The details of the patients like age, sex, chief complaints, investigations and clinical diagnosis were collected from medical case records. Histopathology slides were retrieved and studied. When additional slides were required the sections were taken from paraffin blocks and slides were stained and studied.

Clinical notes of all cases were studied to get clinical information. Specimens were received in 10% formalin in the department of Pathology. A detailed gross examination was done. Representative tissue bits were taken and subjected for processing. Thin sections (3-4micron) were cut on microtome. The slides were stained with routine hematoxylin and eosin. Special stains like Ziehl – Neelsen and PAS were done when required to confirm the histopathological diagnosis. A detailed microscopic examination was performed. The data was represented in the form of frequency and percentage and analysis of histopathological findings was performed followed by correlation of histopathological findings with clinical parameters.

A total of 30 nonneoplastic lesions of large intestine were studied over a period of 3 years (from July 2017 to June 2020).

The nonneoplastic lesions were distributed in all the age groups with maximum frequency from 5th to 8th decades as shown in Table 1.

Analysis of lesions according to age

Histopathological study and analysis of all the lesions was performed which revealed a wide range of lesions (Table 2) amongst which perforation was the most common lesion followed by gangrene.

Distribution   of non-neoplastic lesions of large intestine   according to histopathological diagnosis. 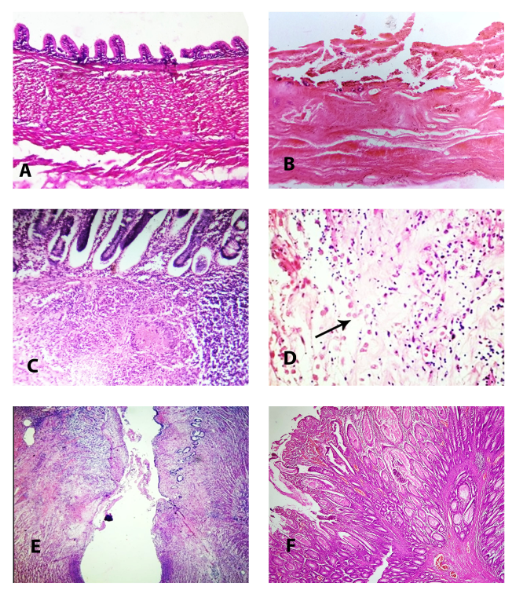 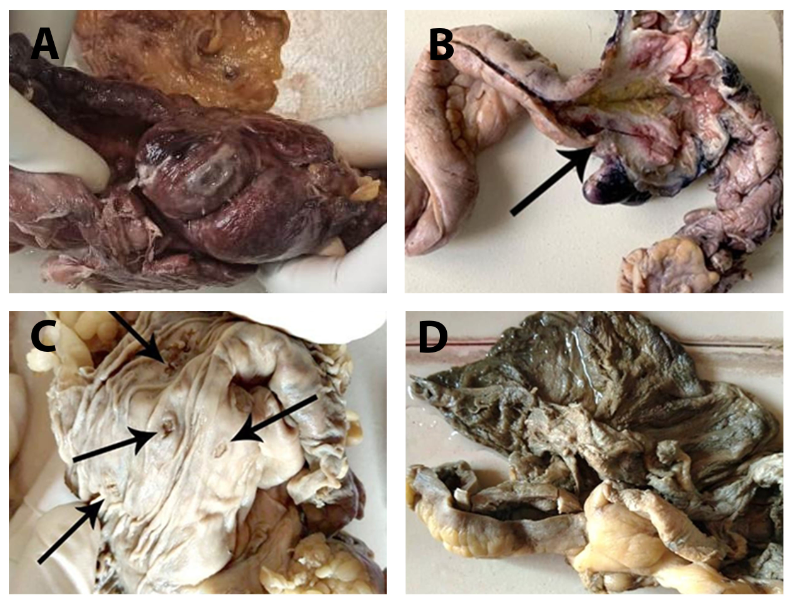 Hirschsprung disease was diagnosed in 5 cases, including 4 males and 1female (Male to female ratio - 4:1), age range being 19 days to 14 years. Four patients presented before 2nd year of life. There was a 14years male patient with late presentation, came with complaint of abdominal pain, vomiting and abdominal distension. Most common presentation in all other patients was constipation. Microscopic examination revealed absence of ganglion cells and hypertrophied nerve bundles.

Perforation was the most common nonneoplastic lesion of colon found in our study (total 13 cases). Out of the 13 cases of perforation, 10 cases had only perforation, two cases had gangrene as associated finding and one case had amoebic colitis. Perforation was commonly found beyond 4th decade and was more common in males (9 cases) than females (4 cases). Most common site of perforation was sigmoid colon, 7 cases (53.8 %) followed by caecum, 4 cases (30.8 %) (Figure 2A).

Total 6 cases of gangrene were found. All the six patients were males. Most common site was sigmoid colon (three cases) followed by caecum (two cases). All cases were beyond 4th decade. Two cases showed perforation as associated finding. One case had presented as strangulated hernia. One patient was known case of hypertension and showed superior mesenteric artery occlusion on CT scan. Gross examination of specimen showed typical dark brown appearance in majority of cases. Microscopic examination showed extensive areas of transmural hemorrhagic necrosis (Figure 1B). The submucosa showed congested and dilated blood vessels, with presence of thrombi in few cases.

Two cases of Crohn’s disease were diagnosed, both were male patients who presented with abdominal pain. Right hemicolectomy specimens were received in both cases. One case had lesion in both small intestine and large intestine. On gross examination serosal surface of caecum showed hypertrophic appendices epiploicae and wrapping of the fat around caecum, wall of caecum appeared thickened. Ileal wall showed three strictures. Mucosal surface of caecum and mucosa of ileum corresponding to strictures showed irregular ulcers with dark brown appearance. Microscopic examination showed many knife like, fissuring ulcers (Figure 1E) with infiltration by polymorphs, lymphocytes, plasma cells and occasional foreign body giant cells. The wall and mucosa of ileum in between strictures showed characteristic skip areas. The other patient had lesion in large intestine only.

Out of 30 non-neoplastic lesions of large intestine, in the present study, the most common lesion was perforation (10 cases), followed by gangrene (4 cases). Two cases had gangrene with perforation. Other lesions included Hirschprung disease (5 cases), Crohn’s disease (two cases) and one case each of Enteric duplication cyst, tuberculosis, amoebic colitis with perforation and Peutz-Jeghers polyp. Three cases had nonspecific inflammation.

Of the 5 cases of HD (13.89%) diagnosed in our study, four patients were below 2 years (80%). There was a male predominance (Male to female ratio was 4:1). Sulegaon et al. studied 38 nonneoplastic lesions of which three cases were that of HD, including 2 day old neonate, 11 years old male and 5 years female.3 Rescorla et al studied 260 patients of Hirschsprung's disease including 213 boys (82%) and 47 girls (18%). One hundred and six patients (41%) were younger than 30 days, 90 patients (35%) were between 1 month to 1 year and 64 patients (25%) were older than 1 year. 4 One patient in our study presented at 14 years of age indicating delayed presentation. Martin et al also reported late diagnosis of HD at 13 years of age.5 Lawal et al also reported late diagnosis of HD in a 12 years boy.6 Doodnath et al studied 490 cases of HD presenting after childhood out of which 390 (79.6%) were confined to the rectum.7

In our study, perforation was most common beyond fourth decade and was more common in males (9 cases) than females (4 cases). In majority of cases (10 cases), cause could not be specified, 2 cases had ischemic etiology and there was one case of amoebic colitis with perforation. Most common site affected was sigmoid colon, 7 cases (53.8%) followed by caecum, 4 cases (30.8%). Singla K et al, studied 35 cases of large intestinal perforation. Male to female ratio was 2.8: 1, age group involved was 6 years to 80 years. Most common site involved was caecum followed by descending and sigmoid colon. Most common etiological factor was amoebiasis (13 cases, 37.14%), followed by nonspecific ulcer (12 cases, 34.28%), tuberculosis (5, 14.28%), adenocarcinoma, idiopathic gangrene and volvulus.10 In the study done by Nanavati M et al, 5 cases of perforation of colon were found out of which four cases had nonspecific inflammation and one case was of tuberculosis.11

Gangrene was found in 6 cases (13.3%). All six patients were males, belonging to age group of 31 to 90 years, age group 71-80 showed maximum number of cases. Sulegoan et al found 12 cases of ischemic colitis out of 38 cases studied, age range was 25 to 75 years with M:F ratio 7:5.3 Most common site in our study was sigmoid colon. Ischaemia may involve any portion of the colon. However, the area of maximum susceptibility is the watershed area between the superior and inferior mesenteric vessels and thus the common site of ischaemic lesions is the region of the splenic flexure and rectosigmoid junction.12 Kontogianni A et al, studied 254 cases of ischemic colitis and classified as gangrenous (40cases, 16%) and nongangrenous type (214 cases, 84%). In non-gangrenous type 127 patients were females, and 87 patients were males. The patients’ age range was from 22 to 96 years and 19/214 patients (8.8%) were less than 50 years of age. The gangrenous type included 17 women and 23 men. Age range was from 57 to 89 years and none of the patients were less than 50 years of age. Gangrenous type cases showed necrosis of large bowel wall. Nongangrenous type ischemic colitis showed mucosal atrophy, edema, hyperemia and mild acute inflammation. The etiological factors of the disease, in most cases, were drugs and mucosal trauma.13

In our study, tuberculosis was diagnosed in a 53 year old male patient who presented with complaint of abdominal pain. Intraoperative examination showed mass in the caecum with ileal stricture and ileal perforation. Tripathi PB et al, studied 110 cases of gastrointestinal tuberculosis over a period of 5 years. Most common clinical presentations were abdominal pain, fever, weight loss. Other complaints were diarrhoea, gastrointestinal bleeding and palpable abdominal lump. On gross examination, apart from typical transverse ulcers, strictures, hyperplastic lesions and serosal tubercles, intestinal perforation (32.6%) were seen with high frequency in their study.14

Two cases of Crohns disease were diagnosed, both were male patients, who presented with abdominal pain. One case had lesion in both small intestine and large intestine and one had lesion in large intestine only. Manthini et al found six cases (out of 46 cases) of inflammatory bowel disease.2 Sulegoan et al found three cases of inflammatory bowel disease among 38 cases. All three cases were of ulcerative colitis.3

To conclude, there is morphological diversity in the lesions of intestine, at the same time associated with significant overlap of the clinical manifestations. Our study emphasizes the importance of histopathological examination in the management of colonic lesions.