Placental mesenchymal dysplasia is a rare disorder mainly characterized by enlarged placenta. Patients on antenatal visits present with normal or slightly raised Beta-HCG, raised Alfa-fetoprotein and cystic structures on USG resembling a molar pregnancy. It has to be differentiated from molar pregnancies to avoid unnecessary termination of pregnancy. This condition is associated with IUGR or IUFD. Mostly the fetus are females. Due to lack of awareness of this condition it remains underreported. Here we present a case report of 20 years old female 37 week pregnant with IUGR with clinical suspicion of molar pregnancy gave birth to alive female fetus and on histopathological examination of placenta was diagnosed with PMD.

Placental mesenchymal dysplasia (PMD) is a rare placental lesion, which is usually difficult to identify due to unfamiliarity of the disease by clinicians, radiologists and pathologists.1 The incidence of PMD is 0.02%2 with a definite predilection for female fetus.3 Distinguishing PMD from its mimics, specifically molar pregnancy is necessary since it may prevent unnecessary termination of pregnancy. Unlike molar pregnancies, PMD usually features a normal fetus. However, PMD is distinct in that it has a high incidence of fetal growth restriction (FGR) and intrauterine fetal death (IUFD), and is associated with Beckwith Wiedemann syndrome (BWS).3 Here we present a case report of 20 years old female 37 week pregnant with IUGR with clinical suspicion of molar pregnancy gave birth to alive female fetus and on histopathological examination of placenta was diagnosed with PMD.

There was no trophoblastic hyperplasia or inclusions. Some of the distal villi were large, dysplastic (Fig.3 a) and showed chorangiosis (Fig. 4 a) with numerous capillary vessels, more than 10 per villus in numerous villi.(Fig. 4 b) Some of the stem villi showed decreased vessels located in the periphery. Many large abnormally thick blood vessels with thick muscular wall showing haemorrhage and thrombosis of lumen were seen.(Fig3b)

With these gross and microscopic features we made a histopathological diagnosis of Placental mesenchymal dysplasia. 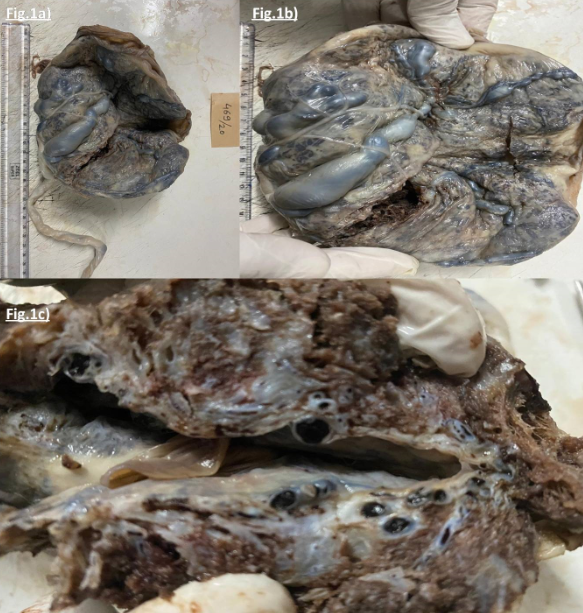 H&E stained sections from the placenta showing; a): mixed population of enlarged dysplastic villi among mature third trimester villi (40X); b): Stroma of dysplastic villi composed of loose connective tissue and formation of cisternae as a result of fluid accumulation(100X)

Placental mesenchymal dysplasia (PDM) is a rare disease, the cause is unknown, some are called mesenchymal stem hyperplasia, and some are called pseudo-vesicular block or vascular malformation.4, 2 PMD was initially described by Moscoso et al in 1991 as placentomegaly which gives the image of partial hydatidiform mole with elevated level of alpha feto-protein.5 The incidence of PDM is difficult to determine because its clinical understanding is inadequate, which may result in overall underreporting. On the other hand, it is currently only detected when the placenta is infected or complicated.6, 7 The incidence of PMD may rise as the pathologist's awareness increases.8, 9 The pathogenesis of PMD is unclear. Chen CE10 and others believe that the proliferation of Stem chorionic mesenchymal cells is accompanied by hyperplasia of mesenchymal cells, and there is a normal villus mesoderm connective tissue in the expanded stem villi. The presence of eosinophilic mucopolysaccharide, presumably congenital mesoderm malformation. The karyotype of fetal chromosomal examination in PMD patients is normal, and a small number of patients are accompanied by chromosomal abnormalities, including 13-trisomy, triploid and 13q12.11 involving the GJB6 gene.11, 12 Although the pathogenesis of PMD remains unknown, androgenetic/biparental mosaicism has recently been suggested as the underlying cause of PMD.13

PDM has no typical clinical features in early pregnancy. It can be diagnosed by routine prenatal examination or ultrasound. Serum ßHCG is normal or slightly elevated, and serum alfa-feto protein is elevated because of increased surface area of placenta in PDM.14

In patients with PMD, intrauterine growth restriction, intrauterine death, premature delivery, may be due to poor perfusion of the placenta. The complications of the fetus are mainly anemia, thrombocytopenia or microangiopathic hemolysis, which may be related to the abnormal distribution of blood vessels.15

Distinguishing PMD from its mimics, especially molar pregnancy is important for preventing the unnecessary termination of pregnancy. Unlike molar pregnancies, PMD usually features a normal fetus. However, PMD is distinct in that it has a high incidence of fetal growth restriction (FGR) and intrauterine fetal death (IUFD), and is associated with Beckwith Wiedemann syndrome (BWS), a condition characterized by macrosomia, visceromegaly, macroglossia, and omphalocele.3

The imaging findings of PMD are similar to those of hydatidiform moles, which are easily misdiagnosed before delivery. Placental dysplasia is due to the cystic expansion of some of the villi, which should be differentiated from the vesicular vesicles.5 Pathologically, PMD placentas are usually large size, and show edema of stem villi with intact terminal villi and many kinds of vascular anomalies, such as cirsoid chorionic vessels, thrombosis, thickness of vessel wall, vascular stenosis, villous chorangiosis, chorioangioma and fetal thrombotic vasculopathy. Also abnormal umbilical cords, including tortuous, marked twisted cords, excessively long cords, etc.3, 14 Absence of trophoblastic proliferation in PMD placentas is a histological difference from partial moles.5 In this case report imaging studies were suggestive of a molar pregnancy. On gross examination, the placenta was slightly enlarged and bulky. The umbilical cord showed marginal insertion. The chorionic plate showed numerous abnormally large, dilated varicose-like vessels. The parenchyma showed few grape like cysts and tan-gelatinous appearance. The membranes were unremarkable. On microscopy, there was mixed population of villi – mature distal villi and dysplastic stem villi. The enlarged villi showed stromal oedema and cistern formation. The immature villi showed features of chorangiosis. There was no trophoblastic hyperplasia or inclusions. These gross and microscopic findings ruled out Hydatiform mole and confirmed PMD. Interestingly, the fetus in our case was alive, female and without any anomalies.

Detailed histopathological examination is essential for diagnosis and differential diagnoses. With suspicion on USG, prenatal identification of these cases is very important to reduce unnecessary abortions since the prognosis is better than a partial hydatidiform mole. PMD should be included in a differential diagnosis of cystic lesions of the placenta by sonography, especially when a phenotypically normal-appearing fetus can be identified. PMD should also be kept in the mind when the prenatal characteristics of PMD, such as an elevated AFP and normal hCG level in the mother, a normal female karyotype revealed by amniocentesis, and dilated subchorionic vessels revealed by ultrasonography during the third trimester, are detected,