Rhinoscleroma – A case report with review of literature

Rhinoscleroma is a chronic granulomatous disease caused by gram negative rod shaped bacteria Klebsiella rhinoscleromatis. Most common sites of predilection include the nasal cavity and nasopharynx, but there are reports of its occurrence at other sites like the larynx, trachea, bronchi, middle ear, and orbit. We are reporting here a case of rhinoscleroma in a middle aged female patient involving the nasal cavity along with a brief review of literature.

Rhinoscleroma is rare chronic infectious granulomatous process involving the upper respiratory tract caused by Klebsiella rhinoscleromatis1 which is a short encapsulated gram negative rod shaped bacilli. It is endemic in Middle east, central and south America and is sporadic in other parts of the world.2, 3, 4, 5, 6 It has a female preponderance affecting older age groups in 3rd to 6th decade. Main route of transmission is by direct inhalation of nasal droplets or indirect contact with nasal secretions of infected person.7 Although it has affinity for nasal mucosa it is known to occur at other sites like nasopharynx (18-43%), larynx(15-40%), trachae (12%) and bronchi (2-7%).8 10 % of rhinoscleroma cases are also known to occur in the lip.9 Here we are reporting a case of rhinoscleroma that was clinically suspected as inverted papilloma.

A 34 year female presented to ENT out patient department with a reddish swelling inside right nostrils since 3 months. It was insidious in onset and gradually progressive. She complained of long standing history of sneezing, nasal itching with nasal obstruction and on and off headache with running nose for which she consulted a local physician who prescribed her with medications. Her symptoms reduced a bit however the mass didn’t subside on taking those medications so she was then referred to our institution with a suspicion of the mass being malignant. On examination the swelling was non tender, soft to firm in consistency and did not bleed on touch. She was planned for incisional biopsy for which she was advised to do a panel of routine blood tests, reports of which were apparently normal. Punch biopsies were taken and was send to our department for histopathological analysis. Grossly we received bits of irregular grayish black tissue altogether measuring 3x2 cm. Slides were stained with routine H&E. All slides were examined under light microscopy. H&E stains showed stratified squamous epithelium with underlying subepithelium showing groups of large vacuolated histiocytes with single or multiple cytoplasmic vacuoles and small centrally to peripherally located nuclei (mikulicz cells), fine nuclear chromatin and indistinct nucleoli admixed with chronic inflammatory cells lymphocytes and plasma cells along with Russel bodies (Figure 1, Figure 2, Figure 3, Figure 4). Giemsa stained demonstrated the intracellular bacilli within the clear cytoplasmic vacuoles (Figure 5). Thus Final diagnosis of rhinoscleroma was clinched based on histopathology and special stains. 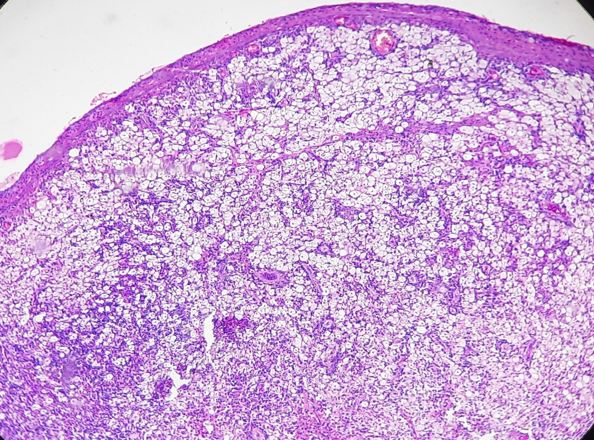 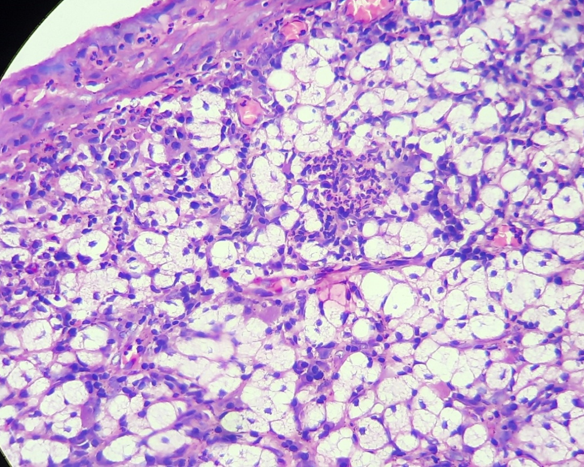 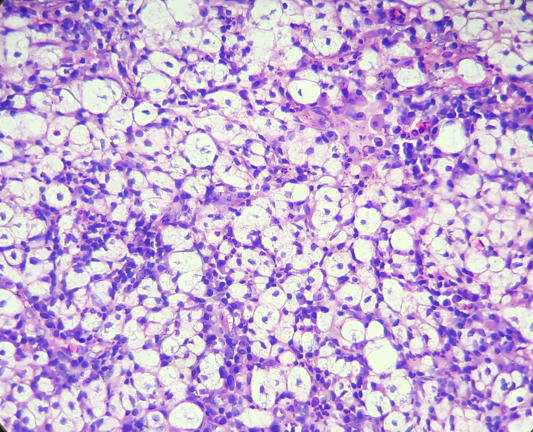 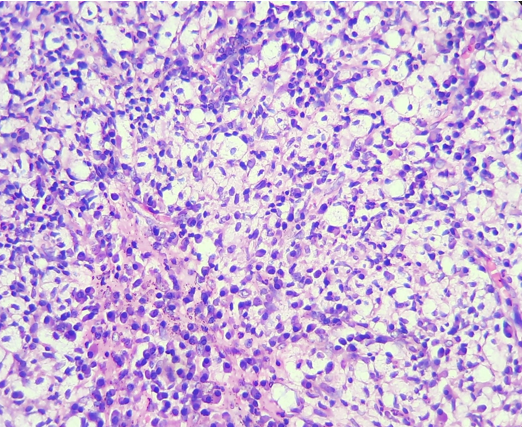 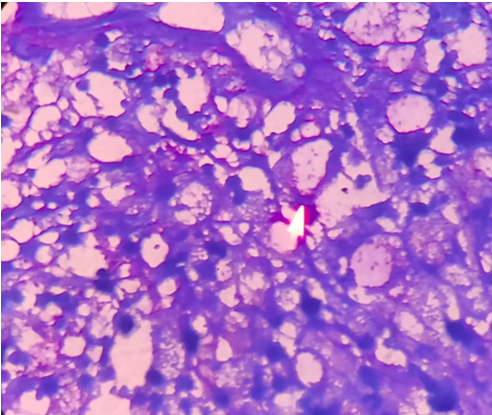 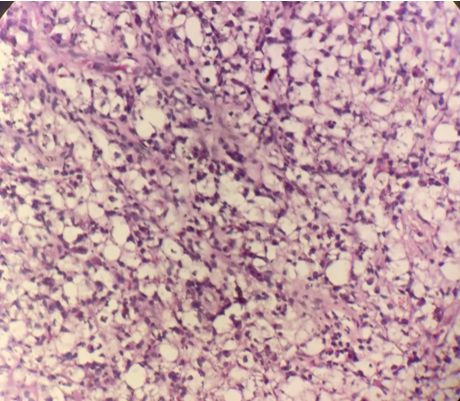 Rhinoscleroma was first described by Hebra in the year 1870. The disease predominantly occurs in middle aged woman, maintaining a poor hygienic and nutritional status. Humans are the only host for K. rhinoscleromatosis.

The exact pathogenesis of the disease as to how mikulicz cell is formed and eventually rhinoscleroma formation is not clear. Klebsiella rhinoscleromatis like Klebsiella pnemoniae has a mucoployscaharide capsule that contibutes to inhibition of phagocytosis thus faciltating its intracellular survival.10 It is also postulated that altered immune response with impaired cellular immunity is thought to play a role in the pathogenesis of the disease and an alteration in CD4:CD8 ratio is responsible for chronicity of the disease.11 Rhinoscleroma usually occurs at the epithelial transition zones, especially at the junction where stratified squamous epithelium of the vestibule meets ciliary epithelium of the nose.12

Clinically the patient may present with any of the three stages of disease progression. Three stages described in rhinoscleroma are: catarrhal (rhinitic), granulomatous (proliferative or nodular), and sclerotic (cicatricial or fibrotic).1 Patients with initial catarrhal phase present with nonspecific rhinitis that evolves into chronic foul smelling purulent discharge along with dry crusting of mucous membrane, and nasal obstruction. On histopathology, it shows a nonspecific subepithelial infiltrate of polymorphonuclear leucocytes with granulation tissue.2 The clinical features are more prominent in granulomatous phase. In this phase, patient develops granulomatous nodular rubbery mass(lump) which leads to nasal obstruction, loss of smell and may lead to nasal enlargement with nasal deformity. The dense infiltration of lymphocytes, plasma cells, Russell bodies, and pathognomonic large Mikulicz cells are the diagnostic histopathological changes seen in granulomatous stage.2 If left untreated patient goes into sclerotic phase. Permanent complications are the features of sclerotic phase which includes nasal deformities, dysphonia, dysphasia, stridor and blocked airways.1 In sclerotic phase, extensive fibrosis and less inflammatory cell infiltration are the main histopathological findings.1, 2

Histopathological differential diagnosis for rhinoscleroma is quite broad and includes both neoplastic and nonneoplastic disease states. Given the morphologic appearance of Mikulicz cells, one must consider histiocytic lesion, such as Rosai-Dorfman disease as a differential diagnosis. Rosai-Dorfmann disease classically presents with massive, painless cervical lymphadenopathy with extranodal disease most commonly affecting the skin and central nervous system. Histology reveals histiocytes and emperipolesis with immunohistochemistry positivity for S100 and CD68 but negative results for CD1a.13 In younger patients, disseminated juvenile xanthogranuloma and Langerhans cell histiocytosis may be considered. Juvenile xanthogranuloma presents typically with a dermal lesion, showing histiocytes, mixed inflammation, and Touton giant cells and can be disseminated in rare cases. Immunohistochemistry is positive for CD68 and negative for S100 and CD1a.14 Langerhans cell histiocytosis commonly involves the head and neck region, lacks Touton giant cells, has a prominent eosinophilic infiltrate, and is strongly positive for CD1a.15 under Infectious category most important differential includes leprosy that resembles histologically and is characterised by presence of diffuse arrangement of foamy macrophages (virchow cells) that contains plenty of lepra bacilli within them. They are usually highlighted by doing special stains like (fite faracco stain) that was negative in our case [Figure 6] and ruled out the possibility of leprosy.

The diagnosis of rhinoscleroma thus relies on the adequate correlation of clinical, histopathological, and bacterial identification by the use of special stains. Around 50% to 60% of patients shows positive cultures for K rhinoscleromatis on blood or MacConkey agar who presents in the granulomatous stage.16 Identification of Klebsiella species can also be accomplished with the help of 16s rRNA gene sequencing.17 Main stay of treatment of Rhinoscleroma includes a combination of antibiotics , surgical debridement and repair; however, the patient needs to be on routine follow up as the recurrence rates are very high. Our patient was started on ciprofloxacin 500 mg and doxycycline 100 mg twice daily for 4 months and showed good response to treatment with no clinical relapse even after 6 months of follow up.

MM Muzyka KM Gubina Problems of the epidemiology of scleroma. 2. Some aspects of the problem of endemic focus formationJ Hyg Epidemiol Microbiol Immunol1972161820