Patil and Aloorker: Carcinosarcoma of uterine corpus – A case report

Uterine carcinosarcomas comprise a distinct rare entity of uterine malignancy with a very aggressive nature and poor prognosis. They make up to less than 5% of all uterine cancers. We report a case of 45yr old lady who presented with the complain of vaginal bleeding since two months and was a known case of dysfunctional uterine bleeding. Postoperative histopathological examination of the hysterectomy specimen revealed the diagnosis of uterine carcinosarcoma.

Uterine carcinosarcomas also known as malignant mixed Mullerian tumours of uterus are rare and very aggressive malignancies and are most common of uterine sarcomas.1, 2 They make up to less than 5% of all uterine cancers.1, 2, 3 It is a biphasic neoplasm comprising of both carcinomatous and sarcomatous components 2, 4 and a poor prognosis. They mostly affect postmenopausal women and are managed surgically.

Ultrasonography revealed an ill-defined tissue mass of about 3 x 2 cm size in uterine body suggesting a possibility of neoplastic aetiology.

Cut section of the specimen showing polypoidal mass projecting into the uterine cavity. 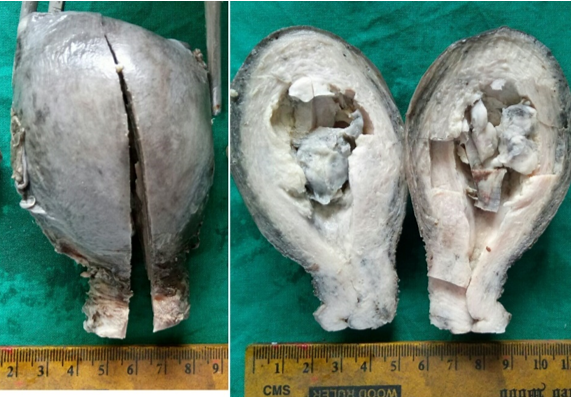 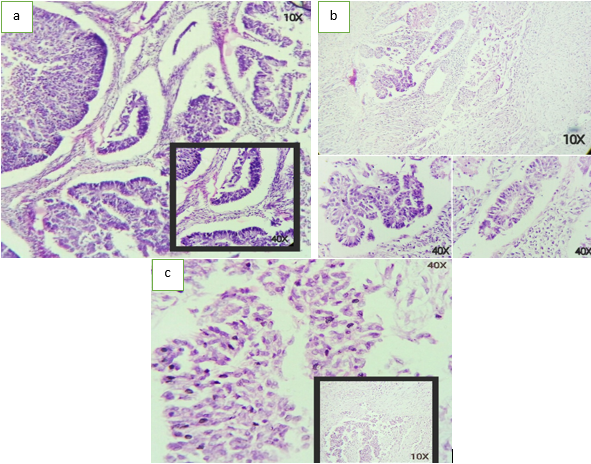 Carcinosarcoma is a rare malignant tumour of uterus with a poor prognosis. It is a biphasic neoplasm comprising of both carcinomatous (epithelial tissue) and sarcomatous (connective tissue) component. Gebhardt in 1899 appears to have reported the first case of carcinosarcoma of uterus.2 Synonyms of carcinosarcoma in literature include “malignant mixed Mullerian tumour ”, “ malignant mesodermal mixed tumour ” and “ metaplastic carcinoma”.2 Uterine carcinosarcoma accounts for 4.3% of all uterine corpus cancers.1

Exposure to radiation, excessive oestrogen exposure, obesity and nulliparity are believed to be associated with carcinosarcoma development. The various other sites where it has been identified are vagina, cervix, ovary and most rarely fallopian tubes (in decreasing order of frequency).2 There are multiple theories with respect to histogenesis of uterine carcinosarcoma as follows:5, 6, 7, 8

The currently accepted theory is the ‘conversion theory’: that uterine carcinosarcoma originates from the metaplastic transformation of a single cell.1

Carcinosarcomas occur mainly in women ~15-17 years after menopause with vaginal bleeding, abdominal pain and uterine enlargement and or polypoid mass in an older patient.1, 3, 9 The symptom triad indicative of carcinosarcoma rather than endometrial adenocarcinoma include pain , severe vaginal bleeding and the passage of necrotic tissue per vaginum.9 The diagnosis is most often made post hysterectomy on histopathological examination and immunohistochemistry.

Uterine carcinosarcoma’s gross histological appearance is usually that of a solitary polypoid mass with regions of haemorrhage and necrosis, projecting into the uterine cavity. Gritty or hardened areas may suggest osseous or cartilaginous differentiation. In half of the patients a polypoid mass within the endocervical canal is present. Uterine carcinosarcomas usually arise from the posterior uterine wall and is large and soft; may be fleshier and bulkier due to sarcomatous differentiation.9

The characteristic features of malignant mixed Mullerian tumour on light microscopy are a mixture of carcinomatous and sarcomatous elements resulting in a biphasic pattern. The epithelial component of a carcinosarcoma may be of any type of Mullerian carcinoma: mucinous, squamous, serous, endometrioid, high grade papillary, clear cells, undifferentiated or a mixture of these the appearance of sarcomatous component is the basis of the division of these neoplasms into homologous (leiomyosarcoma, stromal sarcoma and fibrosarcoma) and heterologous varieties (chondrosarcoma, rhabdomyosarcoma, osteogenic sarcoma, liposarcoma).4 In our case the epithelial component was endometrioid type with glandular pattern and the heterologous component showed chondrosarcomatous (cartilaginous) differentiation. Carcinosarcomas express epithelial (EMA, Pan cytokeratin) and stromal lineage markers with respect to their histology.4, 9

These tumours are characterized by aggressive clinical course and extremely poor prognosis. It is the epithelial component that usually metastasizes and recurs.1 At present recommended surgical treatment is total abdominal hysterectomy with bilateral salphingoopherectomy, infracolicomentectomy, pelvic lymphadenectomy and para -aortic lymph node sampling with peritoneal washing.10 Adjuvant chemoradiation is recommended in most cases but there is no measurable survival benefit.9