A 37 year old multiparous women, presented to OBG OPD with complaints of pain and bleeding from umbilicus during her menstruation. She gives history of noticing a nodule over the umbilicus associated with pain during her menstrual cycle, without any associated bleeding from the site, for the past 6 years,. She had consulted at an outside hospital in the year 2016 for the same. After routine investigations, she underwent a biopsy evaluation of the umbilical nodule on 27/4/2016. A diagnosis of Endometriotic nodule was suggested. Two years after the biopsy, she started to notice bleeding from the umbilicus during menstruation associated with pain. She then consulted at the OBG department of our hospital, in august 2018. On physical examination there was a dark discolouration and tenderness over umbilicus at the time of presentation. She was given a single dose of Medroxyprogesterone 150mg injection and was adviced a repeat the same after two weeks. Later, after two months, she again presented with complaints of pain and bleeding through the umbilicus and presented to the Surgery OPD. Her medical history was unremarkable. She did not give any history of symptoms of pelvic endometriosis such as dysmenorrhea, abdominal pain or dyspareunia. Her LMP (last menstrual period) was on 25/07/2018. She was not on any other oral contraceptives except for the two dose of Medroxyprogesterone which was given two months prior. She was investigated as per the routine. USG abdomen revealed a normal study except for a seedling fibroid in the fundus of uterus. A provisional diagnosis of Primary umbilical endometriosis was made and she was posted for surgical excision of the umbilical nodule. There was no history of Diabetes mellitus, Hypertension, Tuberculosis, Bronchial asthma or Thyroid disorders for her. No history of any drug intake or drug allergies in the past.

She was evaluated in the surgery department. Physical examination revealed a single swelling of size 2 x 1 cm arising from the umbilicus. Surgical removal of the nodule was done. Post- operative period was uneventful.

In the department of Pathology, we received the sample of excised umbilical nodule. Grossly it was a skin attached soft tissue fragment measuring 4x3.5x2cm. A raised grey brown area was noted on the surface of skin measuring about 1.5cm in diameter. Cross section of the specimen revealed grey brown areas with tiny hemorrhagic spots. [Figure 1, Figure 2] Histopathological evaluation showed intact epidermis. The dermis showed multiple cystically dilated glands with endometrial type of columnar cell lining. The glands had amphophilic secretions in its lumen and hemosiderin laden macrophages admixed amongst the epithelial cells. The stroma surrounding the glands were exhibiting decidualisation and myxoid changes. Scattered inflammatory cell infiltrates were also noted in the stroma. A histopathological diagnosis of Cutaneous Endometriosis was made. [Figure 3, Figure 4] 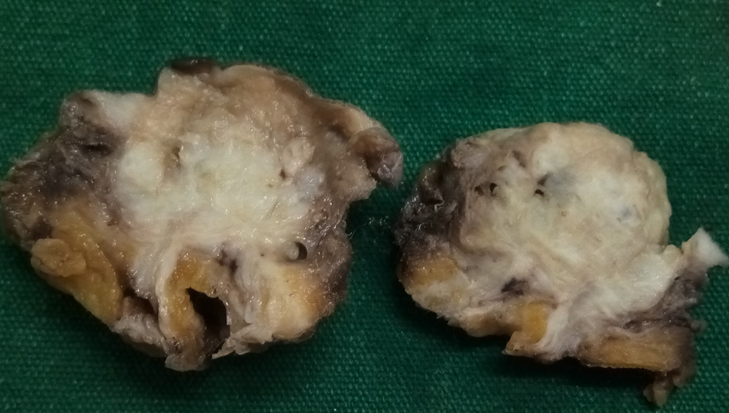 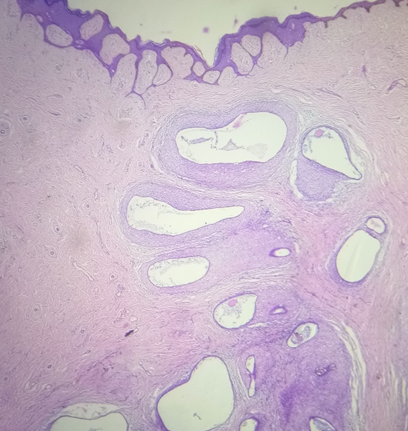 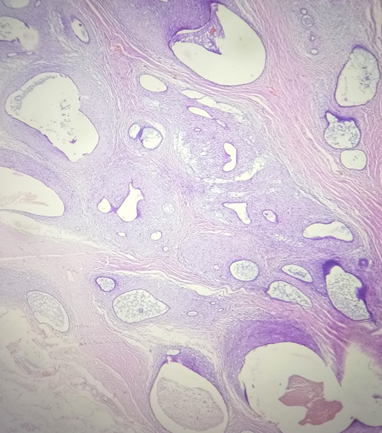 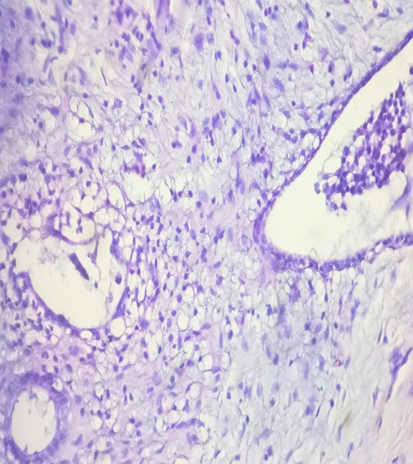 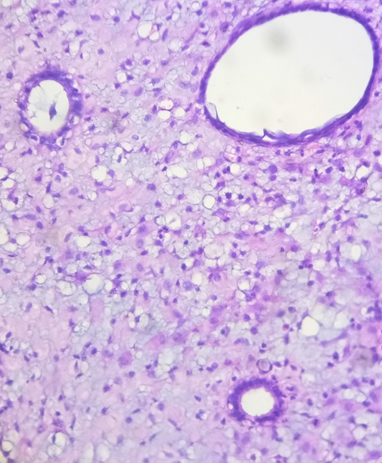 Most of the endometrial deposits are found in the pelvic region, ovaries, fallopian tubes, cervix, pelvic peritoneum, uterosacral ligaments, pouch of Douglas and the rectovaginal septum. There may be rare occurrence in extragonadal and extra pelvic locations. These include most of the body cavities, as well as organs like lung, gallbladder, intestine, kidney, brain, extremities, perineum, and abdominal wall. Extra pelvic endometriosis may occur in up to 12 % of the women with endometriosis. There are medical and surgical treatment modalities in umbilical endometriosis. In treating pelvic pain, both medical and surgical treatments are effective.15 Pre- operative hormone therapy may be used in patients with large mass of umbilical endometriosis, to reduce the size.16 In our case the patient was given hormonal therapy with parenteral medroxyprogesterone injections, followed by a surgical excision. A post excision defect of umbilicus can mostly be repaired directly by using a skin flap, without much disfigurement.17 Hormonal therapy may be considered when there is a coexistent pelvic endometriosis.18 The risk of malignant transformation from umbilical endometriosis is very low. Some rare cases had undergone malignant transformation into endometrial carcinomas. The possibility of a coexisting genital-pelvic endometriosis must be investigated for.

The development of umbilical endometriomas can occur following laparoscopic surgical procedures involving umbilicus. Several theories have been proposed with regard to the pathogenesis of cutaneous/umbilical endometriosis, with coelomic metaplasia being the most favoured one. Also the umbilicus may act as a physiological scar where the remnants of endometrial tissue may be seen which can pave way for the development of spontaneous umbilical endometriosis. In certain scenarios like malignant melanoma presenting as an umbilical nodule or a “sister Mary Joseph nodule”— which may be an umbilical manifestation of an intra-abdominal malignancy there can arise a diagnostic dilemma. In case of an umbilical swelling, conditions like a benign nevus, lipoma, abscess, cyst, or hernia, as well as metastatic deposit from a systemic malignancy, should be considered in the clinical differential diagnosis. However a biopsy with a thorough histopathological examination will be helpful in arriving at a definitive diagnosis in such situations.

Primary umbilical endometriosis is a rare condition with an overall incidence of around 0.5% to 1% among all the endometriosis cases, but at times it poses a diagnostic dilemma. Hence, a histopathological examination is necessary for confirmation of diagnosis. Treatment modalities include hormonal therapy and surgical excision. A preoperative hormone therapy may help in reducing the size of the umbilical lesion but may not provide a cure for the condition. However the treatment of choice is always a complete surgical resection having an extremely low recurrence rate.