Oral submucous fibrosis (OSMF) is a potentially malignant disorder characterized by juxtaepithelial inflammation and progressive fibrosis of submucosal tissues. It may affect any part of the oral cavity, as well as pharynx and oesophagus. The pathogenesis of OSMF may be attributable to habitual chewing of areca nut and its products, which is more prevalent amongst young population of South East Asia and India. Various histopathological features in different tissue components- epithelial, connective tissue stroma, muscle and salivary gland may be observed along the course of this chronic disorder. In connective tissue, extensive fibrosis with progressive hyalinization of collagen fibers and muscles accompanied by inflammatory response is considered to be pathognomonic feature. Advanced stages of OSMF may show atrophic changes or even dysplasia in the epithelium which may undergo malignant transformation. Malignant transformation rate of OSMF has been proved to be around 7.5%. Thus, identification of early histopathological changes in OSMF can lead to improved survival rates. The present article illustrates the various histopathological features observed during different stages of development of OSMF. A better understanding of the correlation between histopathological features and corresponding clinical manifestations can aid dental surgeons in prognostication of the lesion and determining response to treatment.

Oral submucous fibrosis (OSMF) is an insidious, chronic, slowly progressive disease that predominantly involves the oral cavity and may extend to involve pharynx as well as oesophagus.1, 2 The condition was first reported by Schwartz in 1952 as "atrophia idiopathica (tropica) mucosae oris". The term “oral submucous fibrosis” was later designated by Joshi in 1953 primarily based on the histopathological features.3 Since then, diverse descriptive nomenclature has been associated with the condition such as idiopathic scleroderma of mouth, idiopathic palatal fibrosis, sclerosing stomatitis, submucosal fibrosis of palate and pillars.4

The earliest definition of OSMF was given by Pinborg and Sirsat in 1966 as "An insidious, chronic disease affecting any part of the oral cavity and sometimes the pharynx. Although occasionally preceded by and / or associated with vesicle formation, it is always associated with juxtaepithelial inflammatory reaction followed by a fibroelastic change of lamina propria with epithelial atrophy leading to stiffness of mucosa and causing trismus and inability to eat”.5 As the definition implies, OSMF is characterized by juxtaepithelial inflammatory reaction followed by mucosal rigidity of varying intensity due to the fibroelastic changes in the lamina propria, resulting in pallor, mucositis and progressive inability to open the mouth.6

The fibrosis as well as epithelial alterations have been attributed to various etiological agents such as consumption of areca nut and chillies, chewing of gutkha or betel quid (which also primarily contain areca nut), fennel seeds, nutritional deficiency (microminerals), genetic susceptibility, altered salivary constituents, autoimmunity and collagen disorders. 2 Estimates from nation-wide surveys suggest that about 37 percent adult population use tobacco and tobacco-related products in India. 7 About 20% of Indian population has been reported to be habitual users of areca nut.8 Consequently, OSMF is predominantly noted in population of South East Asia, and particularly in India with prevalence of 0.2-1.2% in Indian population.9 Various studies have reported malignant transformation rate of OSMF is around 7.5%.7 OSMF was subsequently categorized as a potentially malignant disorder by the World Health Organization (WHO).10

Considering the chronicity of the condition, various sequential changes can be noted in the epithelium, connective tissue and muscles histopathologically during different stages of progression. Attempts have been made to grade the condition based on these changes for appropriate prognostication of the cases. Identifying early changes is of utmost importance in oral potentially malignant disorders in order to improve the chances of survival.11 The histopathological features occurring in different tissue components (epithelium, connective tissue, muscle, salivary glands) in OSMF have been described sequentially to aid the readers in correlating them to the pathophysiologic process of the condition.

A cascade of events occurs in the various components of tissue involved in OSMF which play a role in progression of the condition. The changes observed in various tissue compartments from the early to advance stages of OSMF have been described in the following text.

In the initial stage, constituents of areca nut and their metabolites cause irritation of mucosal tissues. The continuous abrasion by coarse fibers of areca nut leads to mucosal trauma which allows other constituents of areca nut like alkaloids and flavonoids to diffuse into the submucosal tissues.12 The presence of external irritants evokes an inflammatory response resulting in subepithelial accumulation of inflammatory cell infiltrate. The inflammatory cells mostly comprise of polymorphonuclear lymphocytes and occasional plasma cells.13 Clinically, these changes manifest as formation of vesicles or superficial erosions and lead to burning sensation in the oral cavity.2

The inflammatory reaction causes vasodilation and angiogenesis as an adaptive response to combat hypoxia induced by fibrosis. Overall, the inflammatory response coupled with increase in vascular supply perpetuates epithelial hyperplasia as a part of host’s defense mechanism to protect the underlying tissue from external irritants (Figure 1A).14 Thus, hyperplastic changes such as hyperkeratosis, acanthosis, parakeratosis, basal cell hyperplasia, and pseudoepitheliomatous hyperplasia may be noted in early stages of OSMF. 15 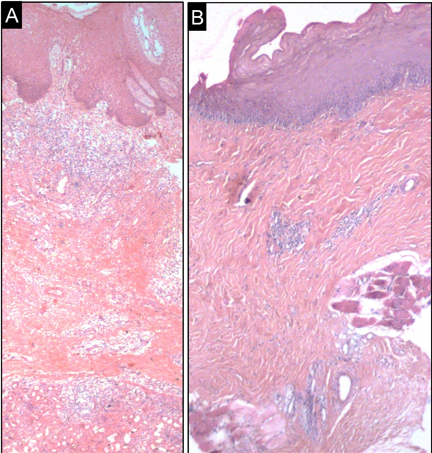 The pathognomonic feature of OSMF is extensive fibrosis extending from subepithelial to the superficial muscle layers (Figure 1B). The generalized fibrosis is a cumulative result of increased collagen production and its decreased degradation by the fibroblasts, which can be attributed to the three primary components of areca nut – arecoline, tannin and catechins. The fibroblasts are stimulated to produce increased collagen by various growth factors and inflammation-related cytokines. These include Platelet derived growth factor (PDGF), Fibroblast growth factor (FGF), Transforming growth factor–β (TGF-β), Interleukin-1, Interleukin-6, Interleukin-8, Tumor Necrosis Factor–α (TNF–α) and matrix metalloproteinases.16

The high copper content in areca nut and its commercial products of results in abnormal collagen structure due to cross linkages produced by lysyl oxidase.17 This results in reduction of collagen degradation by the fibroblasts. The closely apposed bundles of collagen fibers then proceed to become hyalinized which occurs due to increased collagen cross-linkages along with enhanced production of glycoproteins such as perlecan, tenascin and fibronectin in the extracellular matrix.18 Other active components present in areca nut such as alkaloids, polyphenols, sodium, magnesium and bromine also play a role in stabilization of collagen cross-linkages and its subsequent hyalinization.17 Overall, these changes lead to progressive reduction in mouth opening.

Extravasated inflammatory cells may be noted surrounding the blood vessels around which the collagen fibers exhibit perivascular cuffing (Figure 2). The blood vessels tend to get compressed as a result of hyalinization of the surrounding collagen fibers.14 With further progression of fibrosis and hyalinization, decrease in density of microvessels occurs due to diminished levels of mediators of angiogenesis.19 These changes become evident as blanching of mucosa clinically. 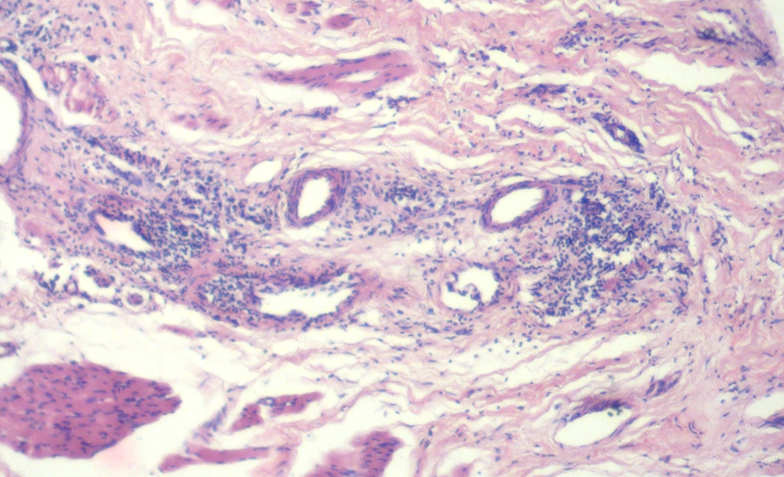 Deeper tissue components including muscle and salivary glands may also get involved in cases of extensive fibrosis.14 The stimulation of fibroblasts in OSMF leads to increased production of stromal type I collagen.18 The muscle fiber bundles may appear homogenized and devoid of nuclei on histopathological examination owing to compression by surrounding fibrosis. The myofibrils of muscle tissue suffer damage due to compression by these thickened bundles of collagen fibers as well as myoischemia resulting from compartmentalization of muscle tissues.20 A resultant degeneration of muscle fibers is, thus, noted in advanced stages of OSMF.

Compression by fibrosis along with reduced functionality due to degenerated muscle fibers leads to progressive atrophy of the muscle. As a result, there occurs rigidity or stiffness of the involved areas.2 This is accompanied by a drastic reduction in the elastic fibers or elastin molecules in advanced stages of OSMF.18 As a result, the flexibility and elasticity of the involved mucosa is reduced, further aggravating the difficulty in mouth opening.

Foci of inflammatory cell infiltrate may be observed in the salivary gland parenchyma (Figure 3A). The chemotactic stimuli associated with inflammatory cells cause release of cytokines such as IL-1, IL-6, IL-8, and matrix metalloproteinases (MMP-2 and MMP-9) which cause destruction of glandular elements, ultimately leading to loss of architecture of the salivary gland.21 Degeneration of acini may be noted even in early stages of OSMF presenting as small clear cytoplasmic vacuoles with swollen or pyknotic nuclei. The cellular outline of the acini may be disrupted causing adjacent acini to appear as fused (Figure 3B). The ducts may get engorged and filled with mucin. At times, disruption of acinar and ductal cells may result in pooling of mucin in the connective tissue stroma.22

A: Loss of salivary gland architecture with inflammatory cell infiltrate in the salivary gland parenchyma; B: Disruption of cell outline of acini and engorged duct filled with mucin 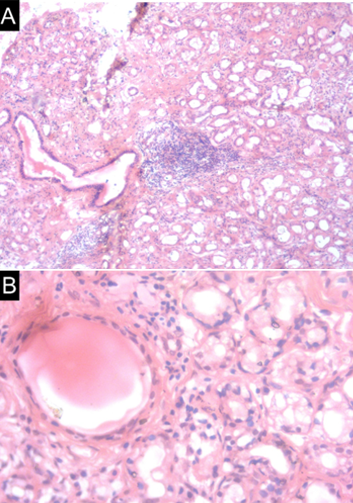 The diminished vascular supply to the glandular epithelium further adds to the atrophy of the gland. As a result, the affected salivary glands become functionally impaired clinically manifesting as reduced salivary flow or xerostomia.22 The absence of protective function of saliva increases susceptibility of the epithelium to develop ulcerations. Furthermore, early exfoliation of cells from the superficial layers of the epithelium may occur in the absence of regulatory factors present in the saliva.12

Early exfoliation of cells along with reduced vascular supply account for the atrophic epithelial changes noted in advanced stages of OSMF.12 Histopathologically, these present as thinning of the epithelium, loss of rete ridges, and liquefaction degeneration of the basal layer (Figure 4). The cytotoxic effect of inducible nitric oxide synthase released as a result of tissue interaction with alkaloids present in areca nut further adds to the ‘ischemic atrophy’ of the epithelium.23 Reduced proliferation index of the cells was described as an additional factor contributing to the reduction of epithelial thickness.24 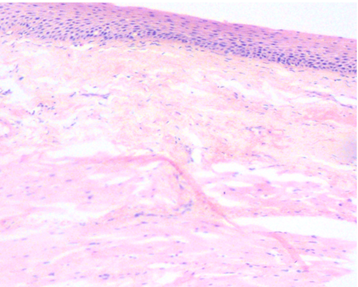 Mild epithelial dysplastic changes including nuclear hyperchromasia, anisonucleosis, anisocytosis, increased nuclear-cytoplasmic ratio, and increased mitotic activity may be noted in advanced stages of OSMF.(Figure 5) The atrophic epithelium, dysplasia and other genetic mutations occurring in OSMF make the mucosa susceptible to develop carcinogenetic changes.24, 25 Reduction in vascularity further reduces drainage of accumulated products from the tissue. This allows the carcinogens to remain in contact with the mucosa for a longer duration.26 Hence, OSMF is considered as a potentially malignant lesion, which is defined as “morphologically altered tissue, in which external factor makes it vulnerable for malignant transformation”.24

Long term follow-up studies have reported malignant transformation range of OSMF ranging from 7 to 13% over a period of 17 years. 27, 28, 29 The rapid exfoliation of epithelial cells in OSMF are suggestive of a high turnover rate and subsequent faster differentiation. 12 This is supported by the fact that the oral squamous cell carcinoma arising from OSMF is generally of better grades of differentiation.24, 30 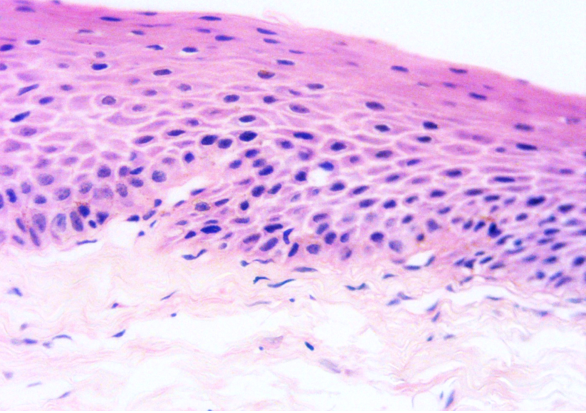 OSMF can present with varied histopathological picture depending upon progression of its pathophysiologic process. Clarity regarding its pathogenesis and corresponding histopathological features noted can enable clinicians to better correlate with the clinical presentation for prognostication of the cases. It would also aid in identification of early changes occurring in the mucosa, thereby allowing to begin early intervention. Early diagnosis of the cases of OSMF would also reduce malignant transformation into OSCC, resulting in an improved survival rate.

A Singh L Ladusingh Prevalence and determinants of tobacco use in India: evidence from recent Global Adult Tobacco Survey dataPloS One2014912114073

WHO. Meeting report. Control of oral cancer in developing countries. WHO Bull198462617