Background: Pancytopenia is commonly reported in clinical hematology practice. Due to its varied marrow pathology and underlying ailments, diagnosis is often misleading and delayed. Bone marrow examination would provide a comprehensive diagnosis of both blood and bone marrow, since aspirate investigates the cytological morphology and biopsy evaluates the cellularity, architecture, and compact marrows.

Objective: To compare bone marrow aspiration and trephine biopsy results in the diagnosis of pancytopenia, and to determine the sensitivity and specificity of aspirate examination in pancytopenia diagnosis.

Materials and Methods: This prospective study was conducted at a tertiary care hospital from July 2014 to June 2016. A total of 320 samples were received at the department of pathology for bone marrow examination (aspirate and biopsy). Romanowsky (Leishman) stain was used to investigate aspirate samples. All biopsy samples were processed into 3-5 μ blocks and stained using hematoxylin and eosin after decalcification with 5.5% EDTA. Data analysis was performed using SPSS19.

Results: Pancytopenia constituted 56 (18.7%) cases with the mean age of 41.79 years. Of the total pancytopenia cases, hematological disorders constituted 50 (89.3%) cases and 6 (10.7%) were non-hematological cases. Aspirate and biopsy diagnosis positively correlated in 76.79% of cases. A 100% sensitivity and specificity of aspirate diagnosis was observed in, acute myeloid leukemia, hypersplenism, myelodysplastic syndrome, megaloblastic anemia, hematological malignancy in remission and negative for lymphoma infiltrate. Aspirate had no role in diagnosis of uremic osteodystrophy and myelofibrosis, whereas leishmaniasis was diagnosed on aspirate alone.

Conclusion: Pancytopenia includes multiple underlying ailments which requires a differential diagnosis approach. Combining both aspirate and biopsy for diagnosis would benefit the patient in prognosis as they are complementary to each other.

Pancytopenia is not a disorder by itself, but a clinico-haematological condition with an underlying defect in the triad elements of the peripheral blood – erythrocytes, platelets, and leucocytes.1 Development of pancytopenia could be attributed to marrow suppression, reduced production of hematopoietic cells causing aplastic anemia, bone marrow infiltration of atypical or malignant cells, normal cells confined in hypertrophied and hyper-reactive reticuloendothelial system causing hypersplenism or ineffective hematopoiesis seen in megaloblastosis.1, 2, 3 Some non-malignant ailments such as nutritional anemia, infections and auto-immune disease also contribute to pancytopenia.4 The clinical manifestation of pancytopenia is usually associated with anemia or thrombocytopenia. Symptoms of leukopenia in the initial stages are rare, however, the condition may become life threatening as the disease becomes progressive.5

Due to its variable presentations, pancytopenia diagnosis is often delayed. Understanding the etiology and severity of pancytopenia determines the treatment plan and prognosis of the patient. The cause of the disease alters the cellularity and composition of the marrow. A hypocellular marrow is observed among pancytopenia cases with marrow production defects. While a hypercellular or normocellular marrow is observed in cases with enhanced peripheral utilization, ineffective hematopoiesis, destruction of marrow and cells during invasive process.5 Bone marrow examination (aspirate and biopsy) is a valuable diagnostic tool in the diagnosis of pancytopenia as it provides comprehensive assessment of the bone marrow. Aspiration determines the cell count, cell maturity and appearance, while biopsy determines cellularity, fibrosis, infiltration, overall hematopoiesis, and architectural patterns.6 A greater accuracy in interpretation can be obtained by combining peripheral smear study and supplementary techniques, such as molecular tests, immunohistochemistry, and flow cytometry.7

This research work compared bone marrow aspirate and trephine biopsy findings in the diagnosis of pancytopenia disorders and determined the sensitivity and specificity of aspirate in diagnosing Cytogenic disorders.

This prospective study was conducted at a tertiary care hospital for 24 months (July 2014 to June 2016). All bone marrow aspirate (BMA) and bone marrow biopsy (BMB) samples received at the Department of Pathology during this period were analyzed for etiological causes of pancytopenia.Aspirate and trephine biopsy samples from patients of all age groups providing consent were included in the study. All samples unfit for analysis were excluded. Detailed medical history, peripheral smear reports and routine blood test results were obtained from all patients.

BMA samples (0.5-1 ml) were received in EDTA and were processed with standard Romanowsky (Leishman) stain. Cytochemical staining (Myeloperoxidase and Periodic acid Schiff) and other special staining (Perl’s stain) were performed when required. All biopsy samples were received in 10% neutral formalin-buffer and was decalcified using 5.5% EDTA for a duration of 24hrs. They were further processed using automated tissue processor to obtain 3-5μ sections blocks and stained with hematoxylin andeosin (H&E) stain.

Cytogenetic study, immunohistochemistry and immunophenotyping were conducted when indicated. All samples were analyzed for morphological details and further associated with ancillary tests to obtain the final diagnosis.

SPSS 19 software was used to scrutinize all data. Microsoft Word and Excel were used to generate tables and graphs.

BMA and BMB equally provided diagnosis for most disorders (Table 1). However, disorders such as uremic osteodystrophy diagnosed on biopsy with clinical correlation and myelofibrosis (Figure 2) were identified on BMB alone. BMA provided diagnostic clues for leishmaniasis (Figure 2) that were not observed on BMB. Hypoplastic anemia (Figure 2) was reported in three cases on BMA, and in seven cases on BMB. Nine cases of dry tap on BMA and three cases of inadequate biopsy were observed in this study. The final diagnosis of BMA and BMB correlated in 76.79% (N=43) cases. 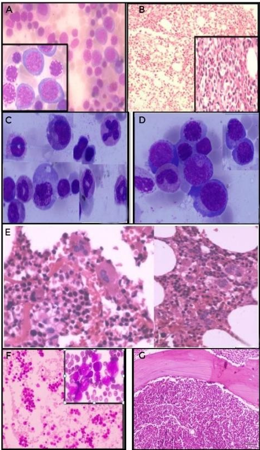 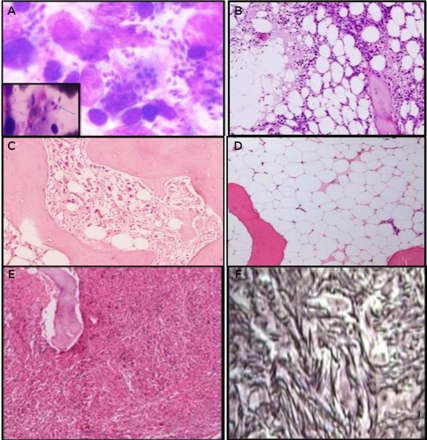 Kappa co-efficient value of one (very good agreement = 0.80 – 1.00) was observed in diagnosis of AML, aplastic anemia, haematological malignancy in remission, hypersplenism, megaloblastic anemia, multiple myeloma, and negative lymphoma infiltration. This result implies highest inter-rater agreement between both the procedures, suggesting the use of either BMA or BMB for diagnosis of these disorders.

Megaloblastic anemia was the most prevalent cause of pancytopenia in the present study. It is caused by impaired DNA synthesis leading to defective nuclear maturation which is triggered by an acquired deficiency of vitamin B12or folic acid.9 Many similar studies1, 2, 9, 10 conducted in the Indian sub-continent report the prevalence of megaloblastic anemia. This result reflects the nutritional deficiency(vitamin B12 and folic acid) seen in the Indian population, attributed to malnutrition, poor hygiene, and low socio-economic status. BMA provided 100% sensitivity and specificity with kappa value of one in diagnosing megaloblastic anemia in this study, suggesting both BMA and BMB have high inter-rater agreement in providing precise diagnosis of megaloblastic anemia. A study by Toi et al11 explains that it is important to perform BMA and BMB since megaloblasts may appear similar to leukemic blasts on BMB and the process of decalcification of biopsy may leech out iron, giving misleading diagnosis. In another study,12 hypoplastic anemia (identified on biopsy) was misdiagnosed on BMA as normocellular marrow. The author attributed this discordance to diluted aspiration, dilution due to peripheral blood and dry tap.

BMB identified two (including one on dry tap) cases of uremic osteodystrophy in patients undergoing long term dialysis. Prolonged dialysis treatment is reported to cause marrow fibrosis, increased osteoclastic activity, splenomegaly and osteomalacia which eventually results in pancytopenia. The morphological changes in bone caused by the chronic kidney diseases (CKD) are better visualized on biopsy than aspirate, and this finding was also reported by Elizabeth et al.13

Multiple myeloma presenting as pancytopenia is rare, and this study reported two cases identified on both BMA and BMB. This manifestation could be due to proliferation of plasma cells in place of normal hematopoietic cells, fas-ligand facilitated apoptosis, bone marrow failure due to cytokines or erythropoietin deficiency induced renal failure.14 A study by Sridevi et al. identified 100% of multiple myeloma with pancytopenia cases on BMB in contrast to BMA where 90% of cases were identified. Their study emphasized the need for a differential diagnosis of myeloma among elderly patients with pancytopenia, for timely and accurate management of these cases.15

Leishmaniasis was reported on BMA alone. BMB provided no additional information regarding diagnosis, similar to the study carried out by Goyal et al.6 A report by Kumar PV et al16 on studying 249 cases of leishmaniasis on bone marrow biopsy observed that biopsy aided in providing an accurate view on the prognosis among patients with leishmaniasis.

Myelofibrosis was only reported on BMB in this study. Failure of BMA in diagnosing myelofibrosis is likely due to progressive scarring or fibrosis of the marrow, which is identifiable when examined on BMB. A study by Khan et al17 reported similar results with diagnosis of myelofibrosis.

A total of nine cases (16.09%) of dry tap were observed in the present study. Further analysis on BMB revealed diagnosis of hypoplastic anemia, aplastic anemia, myelofibrosis, and uremic osteodystrophy. The incidence of dry tap could be due to faulty technique, increased marrow cellularity or fibrosis.18

Considering that distinctive presentations of pancytopenia involves both hematological and non-hematological disorders, it is important to investigate differential diagnosis extensively and ancillary techniques. The aspect of cytological visualization on BMA and histopathological analysis on BMB prove complementary for an accurate diagnosis; and the advantage of one method compared to the other would differ based on the underlying disease.

Most etiological causes of pancytopenia were diagnosed on both BMA and BMB. However, uremic osteodystrophy and myelofibrosis were solely diagnosed by BMB, while leishmaniasis was identified on BMA alone. Considering the complementary diagnostic aspects of BMA and BMB, it is important to combine both procedures, along with other ancillary examinations for the benefit of the patient’s management and prognosis.