Background: Lung cancer is one of the most common cancer worldwide and the leading cause of cancer‑related death. Needle biopsies of lung have been used for diagnosis of lung lesions. They are done CT guided or thoracoscopic guided procedures in our institution.

Materials and Methods: A retrospective type of study. The histopathological records of our Hospital were reviewed for needle biopsies of lung lesions between January 2019 to December 2019 (One year). 35 cases noted during this period.

Results: There were a total of 35 cases during the study period of one year. The specimens received were linear bits and average size was 0.5cm in length. Non-neoplastic lesions were eight (22.85 %) and neoplasms contributed to 15 cases (42.85%) along with inadequate biopsies (20 %) and normal lung biopsies (14.28 %). Maximum number of cases were reported in the age group of 51-70 years (28 cases) with male preponderance. In all age groups, malignant lesions were more common in which, Adenocarcinoma was predominant.

Conclusion: To conclude, in our study malignant neoplasms predominated over non neoplastic lesions. The most common histological type encountered in this study was an Adenocarcinoma.

The Lungs are involved in variety of inflammatory, neoplastic and various other lesions.1 Around the world millions of people suffer from various preventable chronic respiratory diseases.2 A range of conditions that involve the lung parenchyma may be associated with inflammation, fibrosis or granulomatous reactions.3 Lung cancer is a major public health problem. Prompt pathological investigation and diagnosis is essential as most of the clinic-radiological findings in various respiratory illnesses are nonspecific and are essential to improve patient survival, to avoid the rapid progression of the disease and to spare the patient from more invasive procedures4, 5 Therefore, it is most important to determine the leadingcauses of death due to pulmonary diseases to establish correct prophylactic actions & is the least expensive strategy for prevention of further pulmonary irreversible dysfunction.6

It is the most commonly diagnosed cancer worldwide accounting for 1.61 million (12.7%) of the total cancer patients.7 Every year more than 1.6 million deaths occur due to Lung cancer, more than deaths occurring due to breast, colon and prostate cancers combined.8 All over world it accounts for 13% of all new cancer cases and 19% of cancer related deaths.9 Lung is also one of the most common metastatic sites of many primary cancers.10 According to studies, lung carcinoma is a frequent finding amongst all the chest diseases.11

Cigarette smoking is strongly related to Small cell lung carcinoma which rapidly metastasizes to many sites within the body and are most often discovered very late after they have spread extensively throughout body.14 Other various factors affecting include occupational exposures, air pollution and old pulmonary scars.15

Smoking tobacco (both cigarettes & beedis) is the principal risk factor for lung cancer in Indian men; however, among Indian women, the association with smoking is not that much strong, suggesting that there must be other risk factors other than smoking in causation of lung cancer.16 Despite numerous advances in recent years in terms of diagnostic methods, molecular changes, and therapeutic interventions, the outcomes of the lung cancer patients remain poor; hence, a better understanding of the risk factors may impact the preventive measures to be implemented at the community level.

Small lung biopsies are the most common and the first lung sample obtained when a radiological abnormality is detected, tissue diagnosis is required.17 Small lung biopsies are the primary method of diagnosis for the majority of lung cancer patients because 70% of lung cancers are unresectable as patients present in very advanced stages.18 Needle biopsies have been documented to be most effective for diagnosis of peripheral lung lesions including both non-neoplastic and neoplastic lesions.10

After introduction of lung cancer screening tests more patient majority in early stages of the disease are diagnosed based on small specimens. Furthermore, these specimens are needed for an accurate histopathological classification as well as for molecular testing.19, 20, 21

Available data will be analyzed,

The data for this study has been taken from medical record department (MRD) between January 2019 to December 2019 (1 year). There were 35 cases during this period.

All the guided biopsies of lung were included in this study irrespective of them being non-neoplastic and neoplastic, benign or malignant nature including primary and metastases.

The specimen received were linear bits and average size was 0.5cm in length. The specimen was fixed in 10% Neutral buffered formalin and subjected to routine tissue processing then paraffin embedded sections were made. This was followed by H&E staining and preparation of slide. Information including age, gender and final clinical diagnosis were collected from the medical record sections. Detailed clinical history and radiological findings were also obtained.

Out of eight non neoplastic lesions encountered, most common being inflammatory (37.5 %) followed by Pneumonia (25%) and others (25 %), fibrosis (12.5 %). The Others category includes one case of Hydatid cyst and one case of congenital cystic adenomatoid malformation. [Table 1]

Comparison of Malignancies with various studies

There were two cases (13.33 %) in which subtyping was not possible due to small biopsies but they were malignant i.e. Positive for malignancy. One case of MALT Lymphoma was encountered accounting for 6.66 % of all malignant lesions. [Table 2] 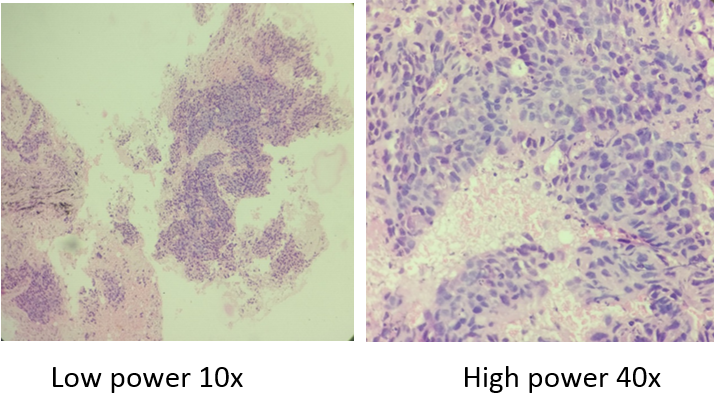 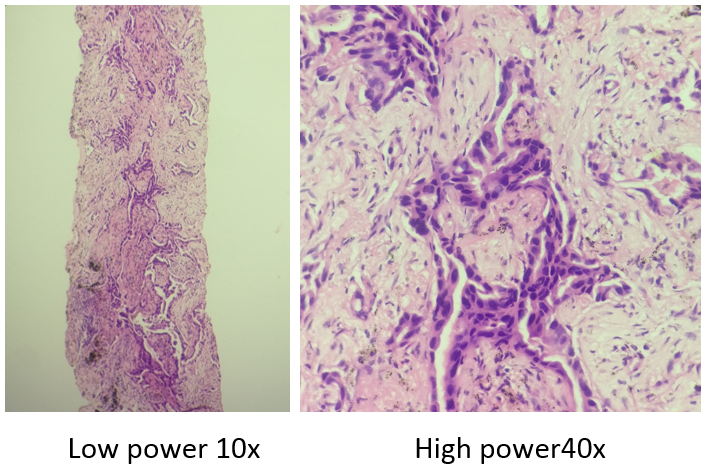 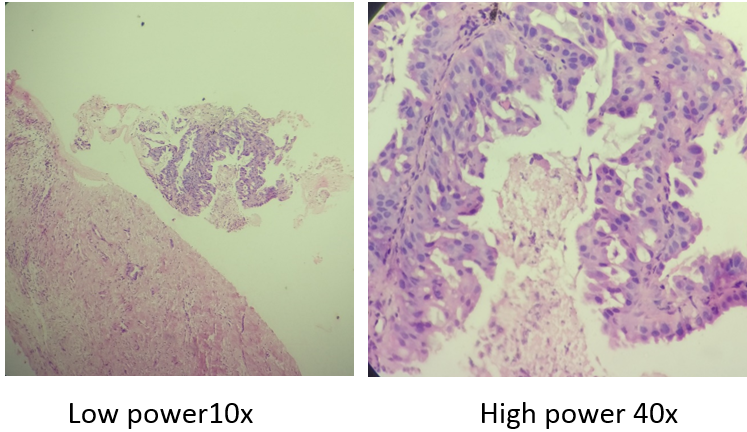 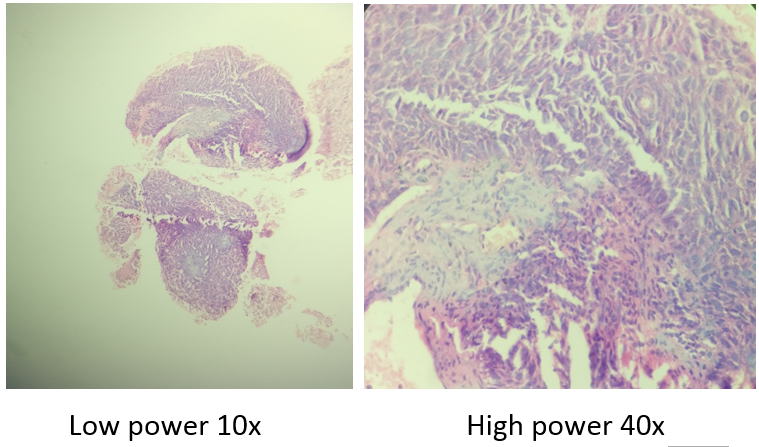 During the study period of One year there were found a total of 35 cases, maximum number of cases were seen in 5th to 7th decade, whereas in studies done by Agarwal A et al22 and Malik PS et al24 the common age group affected was 5th to 6th decade.

The male to female ratio in the present study was 5.2 : 1 and in studies done by Malik PS et al,24 Agarwal et al22 and Noronha et al26 the ratios were 4.6:1 , 4.7:1 and 3.5 :1 respectively. Malignancies were more common than non-neoplastic lesions accounting to 15 cases out of 35 in our study which was in contrast to a study done by Kulshrestha R et al26 where non neoplastic lesions were more common accounting for 506 cases out of 916 cases.

The male to female ratio of malignancies was 3.9:1 with male preponderance which was very similar to studies done by Kumar et al, 29 Pandhi N et al, 30 Dhandapani et al 31 , Gupta et al.32 This showed that in India still females have lower prevalence of smoking. 33

Among the non-neoplastic lesions of lung, in our study majority cases were inflammatory lesions (three cases, 37.5%). This was followed by two cases (25%) of Pneumonia.

Our study finding were in contrast to the study done by Kulshrestha R et al26 in which most of the cases were granulomatous lesions of lung (30.2%) which was followed by inflammatory lesions and fibrosis.

According to most of studies in India, squamous cell carcinoma is the most dominant subtype, but many of the recent studies from India show changing trends of carcinoma, reporting Adenocarcinoma as the predominant subtype.35

To conclude, malignant lung lesions were predominant than non -neoplastic lesions of lung in our study. In our study, the most common histological type encountered was an Adenocarcinoma. In the present study, inflammatory lesions was the most common non- neoplastic condition followed by pneumonia.