Epithelial ovarian cancer normally spreads transcoelomically via the peritoneal cavity and then, in more advanced stages, to the intra-abdominal lymph nodes and the liver and lung parenchyma. Bone metastasis is an extremely rare initial presentation in patients with primary carcinoma of the ovary and is associated with poor prognosis. Herein we report a rare case of femoral metastasis of papillary carcinoma of the ovary in a 49-year-old female, who presented to the orthopaedics clinic with complaints of pain and swelling around the left knee joint since 2 months. X ray and MRI of left leg showed a diffuse soft tissue swelling and osteolytic lesions in the lower femur around the condyles with focal cortical destruction. Fine needle aspiration biopsy of the lesion was suggestive of metastatic adenocarcinoma. Subsequent ultrasonography of the lower abdomen showed a hypoechoic shadow in the left ovary. Local surgical excision with left oopherectomy was performed. After histopathologic and immunohistochemical examination from both the sites, a final diagnosis of primary papillary adenocarcinoma of the ovary with femoral metastasis was given. She was treated with 6 cycles of adjuvant combination chemotherapy of Paclitaxel 150 mg/m2 and Cisplatin 50 mg/m2 and a good response was seen. This case is unique in presentation of bony femoral metastasis with silent epithelial ovarian carcinoma.

Epithelial ovarian cancer generally presents with already advanced disease at the time of diagnosis and is accompanied by poor prognosis with increased mortality.1 Ovarian cancer is responsible for almost half of deaths from cancer of the female genital tract because malignant tumours often spread outside the ovary by the time a definite diagnosis is made.2

They spread predominantly directly within the pelvis and abdomen, but lymphatic and hematogenous spread may also occur.3 The most common sites of distant metastasis are the pleura, liver, lung and lymph nodes.2, 4 However bony metastases from ovarian cancer are rare. They tend to affect the axial skeleton and are associated with abdomino-pelvic disease.3 Median survival of patients with bony metastasis from ovarian malignancy ranges from 4 to 8 months.5, 6 Therefore early diagnosis and optimal management is crucial.

A 49-year-old woman presented to the Orthopaedics Clinic with complaints of pain and swelling around the left knee joint since 2 months. Her appetite was decreased and she had mild abdominal pain for the same duration. There was no history of menstrual irregularities. On examination, there was absence of a left ankle jerk, with left sciatic-nerve irritation but no sensory or motor abnormalities. Her built was normal with no pallor or icterus. On abdominal examination, mild ascitis was noted with no appreciable organomegaly or lymphadenopathy.

X ray of left leg showed a diffuse soft tissue swelling around the knee joint with focal cortical destruction. MRI examination showed foci of osteolytic lesions in the lower femur around the condyles. FNAC of the lesion revealed cohesive clusters of round to oval tumor cells with hyperchromatic nucleus and scant eosinophilic cytoplasm with nuclear moulding and crowding at places. At places acini formation was also appreciated (Figure 1). A cytologic impression suggestive of malignancy favouring metastatic adenocarcinoma was given. The patient was advised further investigations and a bone biopsy was performed. Subsequent ultrasonography of the lower abdomen showed a hypoechoic shadow in the left ovary. Left oopherectomy was performed under general anesthesia.

Grossly the ovarian mass was solid to cystic, 4.3x 3.5 cm in size and well encapsulated. Microscopically tissue sections showed papillary architecture of tumor, with minimal cytologic atypia lined by stratified round to oval tumor cells with hyperchromatic nucleus and mild eosinophilic cytoplasm (Figure 2). Immunohistochemical examination revealed strong nuclear positivity of tumors cells for estrogen receptor, diffuse membranous positivity for CK 7 (Figure 3) and PAX-8 (Figure 4) and negative immunoexpression for TTF-1 (Figure 5). The bone biopsy tissue examination revealed a similar morphological appearance and immunohistochemical phenotype to the left ovarian specimen. A final diagnosis of papillary adenocarcinoma of the ovary with femoral metastasis was made. She was treated with 6 cycles of combination chemotherapy of Paclitaxel 150 mg/m2 and Cisplatin 50 mg/m2 and a good response was seen. Our patient is doing well after 6 months of follow up period.

FNAC smears of the lesion revealed cohesive clusters of round to oval tumor cells withhyperchromatic nuceus and scant eosinophilic cytoplasm with nuclear moulding and crowding at places. At places acini formation was also appreciated. Hematoxylin and Eosin x 10X. 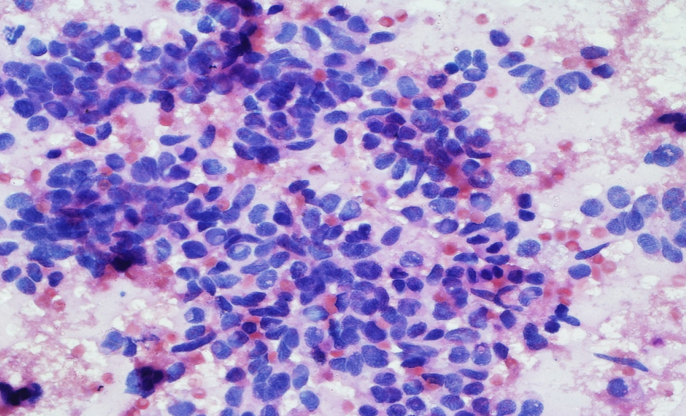 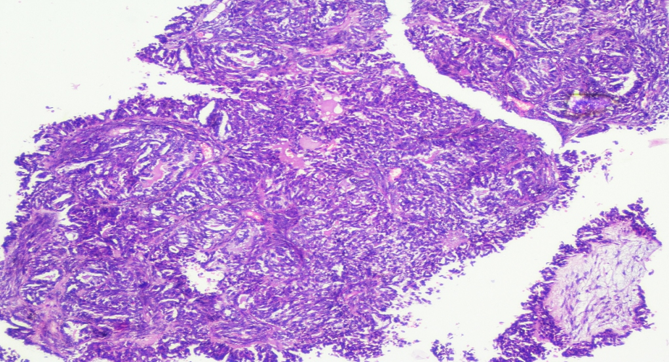 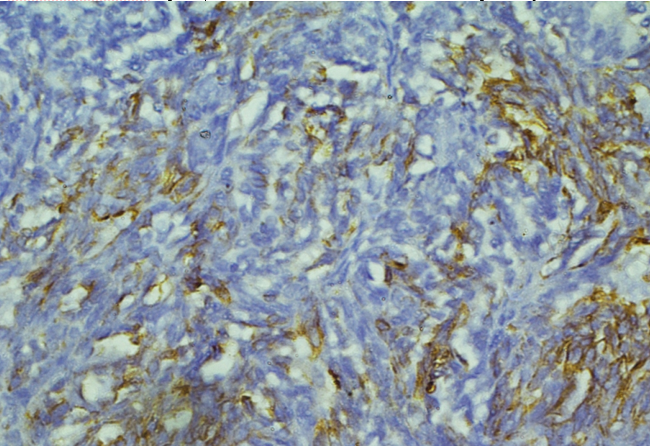 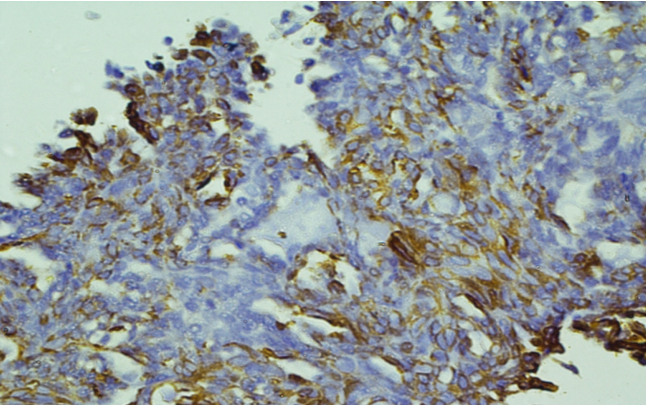 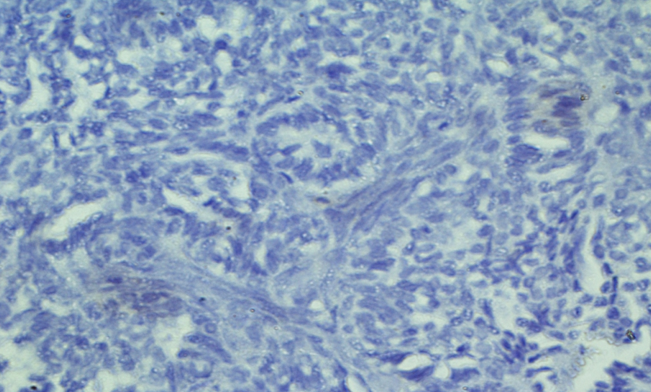 Ovarian cancer with bone metastasis is a rare condition with a poor prognosis. Pathological diagnosis of early bony lesions is essential in a case of ovarian cancer. Also systemic and local disease should be treated with early surgical intervention or palliative therapy for better survival of the patients.3

Immunohistochemistry is essential for histologic diagnosis of suspected metastases, especially with an unknown primary.6, 7, 9 In women with a history of gynecologic tumor and papillary architecture of the metastatic foci, PAX8 is very helpful as it is specific marker for neoplasms of Müllerian duct origin.9 In our patient, possibility of primary thyroid cancer was excluded by negative immunoexpression of thyroglobulin, a marker highly specific of follicular thyroid neoplasms. Thus, we made a final diagnosis of metastatic papillary adenocarcinoma of the left ovary.

Effective chemotherapy for the treatment of ovarian carcinoma has prolonged patient survival.10 Besides chemotherapy, symptomatic management of extra-abdominal metastases should be considered. Surgical excision should be considered in selected patients after evaluating the patient's general condition. Bone lesions on the extremities may be safer to remove by surgery.11, 12

The bony metastases tend to appear late in the course of the disease with a poor prognosis and decreased survival.12, 13 Long-term surveillance should be continued in women with serous adenocarcinoma ovary as relapse after initial diagnosis has been reported to be as long as 28 years.14

This case highlights the importance of a thorough history, abdominal examination and investigations during orthopaedic admission so that such cases are not missed and patients mismanaged, especially as median survival is low with a rapid clinical deterioration. Pathologists and radiologists should not exclude primary ovarian carcinoma in a case of bony metastasis and long-term surveillance of women with epithelial ovarian cancer is recommended.