Histoplasmosis is a dimorphic fungus which is widely distributed among western countries like America and in some parts of the tropical region. It is acquired by inhaling microconidia. Depending on the immune status patient may develop acute or chronic pulmonary diseases or disseminated infection. The disseminated form of nasopharyngeal region can present as ulceration, rhino sinusitis, nasal obstruction, dyspnoea, hoarseness of voice and clinically it can mimic carcinoma. Microscopically, the differential diagnosis of histoplasmosis includes Leishmaniasis, Cryptococci neoformans, Candida glabrata, Pneumocystis jiroveci and Penicillium marneffei infections. The diagnosis of histoplasma is dependent on histopathological examination and demonstration by special stains, where the latter serves the gold standard in demonstrating organism on light microscopy.

Histoplasmosis is acquired by inhaling microconidia, and depending on the amount of fungus inhaled and immune status, the host may show mild self-limiting symptoms to acute or chronic pulmonary diseases or disseminated infection. It usually involves mucocutaneous region, lymph node, and visceral organs. The nasopharyngeal lesions due to histoplasmosis can present as ulceration, rhinosinusitis and nasal obstruction. The manifestation may vary from asymptomatic to symptomatic depending on immune status. The high-risk group of individuals includes cave explores and poultry workers. Immunosuppressed individuals, particularly those with advanced HIV disease and those receiving tumour necrosis factor inhibitors, are at risk for developing disseminated histoplasmosis. 5 The prognosis for patients with histoplasmosis depends on the particular type of disease present, as well as on the presence of comorbid conditions, particularly those that compromise the immune system. Amphotericin B remains an important antifungal agent in treatment of patients with severe and disseminated disease.6 The diagnosis is dependent on histopathological pattern of histoplasma and demonstration by special stains, where latter serves the gold standard in demonstrating organism on light microscopy. The present case report, is about a rare manifestation in a 12-year-old girl with nasal discharge and difficulty in swallowing.

A 12-year-old girl presented to the physician with chief complaints of difficulty in swallowing for 2 years associated with nasal pain and nasal obstruction. Initially, she developed difficulty in swallowing which was acute in onset and gradually progressive associated with pain. She had developed nasal obstruction more on the right side compared to the left side associated with nasal discharge which was mucoid in nature for 2 months and a history of loss of appetite and weight (5 kg) over 5 months. The Patient had a past history of tuberculosis and was treated with anti-tubercular drugs eight months back. There was no significant family history. External examination of the patient showed bilateral multiple cervical lymph node enlargement from level I to V. Local examination of Oral cavity, oropharynx and ear examination were normal. Nasal examination showed punched out lesion in the right philtrum, ala, vestibule, and anterior end of septum and tender oedematous granular lesion present in the left vestibule and anterior end of septum. Anterior rhinoscopy was done for the patient which showed narrowed right nasal cavity with ulcerative lesion present over nasal mucosa, lateral wall and floor. Left side of nose showed patent nasal cavity with granular lesion over nasal mucosa and floor (figure:1-A). 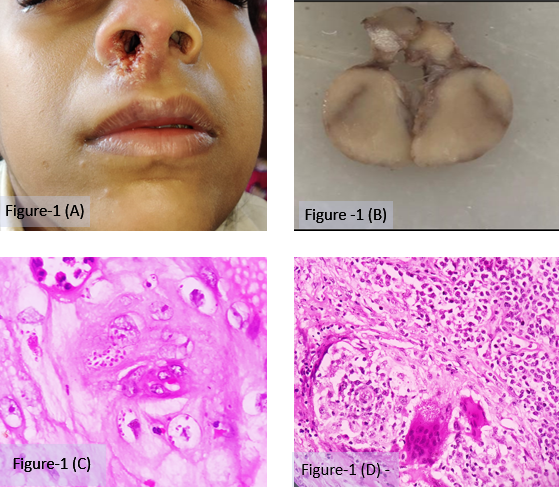 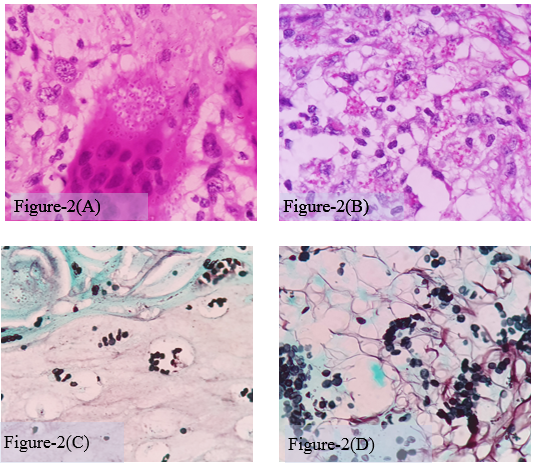 The first case of histoplasmosis from India was reported in 1954 by Panja and Sen. 7 Histoplasmosis showed a sharp rising trend in cases and around 200 cases were identified during the decade 2004–2014 in India. 8 The clearing around the yeast cells may be seen in H&E-stained sections, which may give the appearance of a capsule. This clearing is actually due to the poorly staining yeast wall and retraction of its cytoplasm during fixation and thus it was called as “capsulatum. It occurs in three forms: (i) primary acute pulmonary form, (ii) chronic pulmonary and (iii) disseminated form. Acute pulmonary histoplasmosis manifests as fever, headache, non-productive cough, chills, pleuritic chest pain, weight loss, malaise, myalgia, and sweats, some may exhibit dyspnoea with hypoxia. Chronic pulmonary histoplasmosis occurs in older patients with pre-existing lung disease leading to formation of lung cavity that can mimic clinically tuberculosis. 9 Disseminated histoplasmosis is uncommon except in very young children and persons who are immunosuppressed, especially those who have HIV infection. These patients present with fever, fatigue, anorexia, and weight loss. Immunosuppressed patients may have overwhelming infection manifested by shock, respiratory distress, hepatic and renal failure, coagulopathy. 10 The disseminated form in nasopharyngeal region can present with ulceration, rhinosinusitis, nasal obstruction, dyspnoea, hoarseness of voice and clinically it can mimic carcinoma. 11

Histoplasmosis is acquired by inhalation and then conidia are ingested by lung alveolar macrophages, where the organisms convert into the yeast phase. The phagocytized organisms survive inside macrophages for weeks and spread through the lymphatic system. H. capsulatum an intracellular pathogen that can remain viable inside macrophages until specific cell mediated immunity kills the organisms. Usual sites of dissemination include the mucocutaneous, gastrointestinal (GI) tract, liver, spleen, and bone marrow.

Histopathological features of histoplasmosis of immunocompetent and immunocompromised may vary. In immunocompetent patients the lesion shows as non-necrotizing or necrotizing granuloma. In immunocompromised status the patients respond to infection by phagocytosis of the fungus by macrophages and monocytes. In active lesion the features show granuloma with fungus mostly ingested by giant cells or in the area of necrosis. Microscopically, the differential diagnosis of histoplasmosis includes Leishmaniasis, Cryptococci neoformans, Candida glabrata, Sporotrichosis, Pneumocystis jiroveci and Penicillium marneffeiinfections. Leishmaniasis can be differentiated from histoplasmosis by the absence of a clear halo around spores. Cryptococci are identified as encapsulated, larger spherical to oval yeasts with narrow based budding as compared to H. capsulatum. Candida glabrata shows spherical to oval bodies producing single narrow based buds and does not produce pseudo hyphae like other candida species and also it elicits neutrophilic response. Sporotrichosis shows Splendore- Hoeppli phenomenon around the fungus with round, oval and fusiform cigar shaped bodies. Pneumocystis jiroveci shows cyst forms. They do not bud like H. capsulatum, appear collapsed or helmet shaped, and some demonstrate the distinctive intracystic bodies. Penicillium marneffei often demonstrates internal septation and absence of budding, which are the differentiating morphologic features.

Fungal culture growth of histoplasmosis is slow, usually it takes 4 to 6 weeks. Due to prolonged growth time culture cannot be depended upon for rapid diagnosis histoplasmosis especially in patients with severe disease where timely initiation of antifungal therapy might be lifesaving. 12 Antibodies are generally detectable from 4– 8 weeks after initial infection in case of acute pulmonary histoplasmosis, where as in disseminated histoplasmosis it shows false negative in immunosuppressed patients due to decreased immune response. 13

Our patient had an unusual presentation with bilateral nasal cavity showing ulceration extending to epiglottis with cervical lymphadenopathy. Clinically this was mimicking midline granulomatous lesion, recurrent tuberculosis and carcinoma. The definitive diagnosis of histoplasmosis was made only after Gomori methenamine-silver– and periodic acid-Schiff–stained tissue biopsies were obtained. Based upon biopsy diagnosis timely management of the patient with Amphotericin B intravenous injection for two weeks followed by tablet itraconazole 100 mg twice a day was possible. Follow up of the patient showed significant improvement.

Histoplasmosis is proved to occur in the nasopharyngeal region with cervical lymphadenitis and it must be included as one of the differential diagnosis while evaluating paediatric age group presenting with painful deglutition. From a pathologist’s perspective, while evaluating a cervical node showing granulomatous lymphadenitis in a patient with past history of Tuberculosis the possibility of histoplasmosis should be included in the differentials especially among paediatric age group. Histopathological examination serves as early diagnosis of histoplasmosis that can lead to timely initiation of antifungal therapy for the patients and could be lifesaving.