Malignant mixed mullerian tumor of the ovary: A rare entity

Malignant mixed mullerian tumors (carcinosarcomas) of the ovary are very rare neoplasms which account for less than 1-2% of ovarian tumors. These are associated with an aggressive clinical course and a poor prognosis. Here we are reporting a case of carcinosarcoma of the ovary.

Histologically, MMMTs are mixed neoplasms comprising of both carcinomatous and sarcomatous (mesenchymal) components, which may be either homologous (tissues native to the ovary) or heterologous (tissues that are not found in the ovary normally).2

A 72 year old post-menopausal female presented to gynaecology OPD with the complaint of pain abdomen (left lower quadrant) and decreased appetite for 4-5 days. She also had a history of mass in abdomen since 7 years. A left ovarian tumor was suspected clinically.

The histopathologic examination of the left ovarian mass showed a biphasic pattern comprising of epithelial and mesenchymal components.

Epithelial component was present in the form of sheets and glands. Tumor cells were markedly pleomorphic with focal hobnailing and clear cell change. Hyaline globules and psammoma bodies were also noted.

In addition, there were extensive areas of necrosis and hemorrhage. Mitotic activity was brisk and bizarre mitotic figures were also noted.

Final diagnosis of MMMT was made 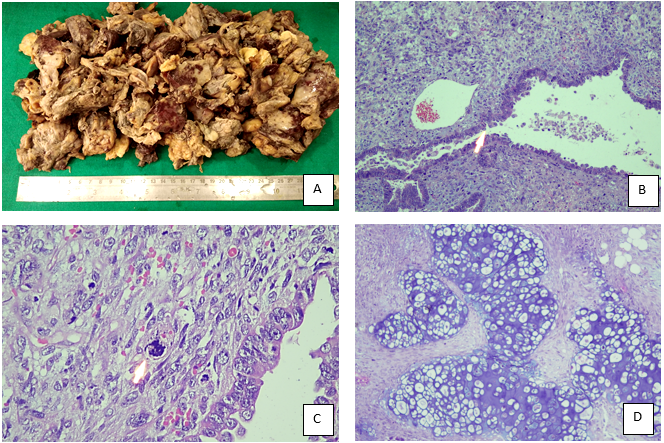 MMMT is an aggressive tumor made up of both epithelial elements and stromal component. It is found in the female genital tract mainly in the uterus, and can rarely be found in the ovaries.2

Thus MMMT of the ovary is a relatively rare tumor affecting mainly the postmenopausal women. These are highly aggressive tumors and have a poor prognosis.2

Many theories have been proposed regarding the histogenesis of these tumors. Collision theory says that carcinoma and sarcoma are two independent tumors. Combination theory suggests that both components are obtained from single stem cells which undergo divergent differentiation. Conversion theory implies that sarcoma is derived from the carcinoma during the evolution of tumors. Another theory suggests that the spindle cell component is just a pseudosarcomatous stromal reaction to an invasive carcinoma.3 Combination and conversion theories are the chief modes of histogenesis among these theories.4

Histologically, ovarian MMMTs are epithelial tumors that are composed of malignant epithelial (carcinomatous) and sarcomatous component. They can be subclassified as heterologous or homologous depending on the origin of their mesenchymal tissue.5 If the sarcomatous part has elements which are native to the ovary or resemble the mullerian duct system (e.g leiomyosarcoma, fibrosarcoma, endometrial stromal sarcoma), it is called homologous. If the tumor contains elements that are not normally found in the ovary (e.g bone, cartilage, skeletal muscle differentiation, etc.), it is termed heterologous.3

The treatment regimen for MMMT is not well established because of the rarity of the disease. It is generally directed against the carcinomatous component instead of the sarcomatous component.4 Different chemotherapy regimens are used. The role of therapeutic radiotherapy is not established.1 The overall median survival is 8.2–8.7 months.5

To summarize, carcinosarcomas or malignant mixed mullerian tumors of the ovary are very aggressive neoplasms that are usually found at an old age. They are usually advanced at the time of diagnosis and carry a poor prognosis. Poor prognosis associated with this disease emphasizes the need for studies aimed to better understand the molecular changes of this disease and the need to design new therapeutic regimens to improve the survival of these patients.2