Background: Gestational trophoblastic diseases (GTD) are a spectrum of lesions occurs as sequelae of pregnancy and it included non-neoplastic and neoplastic lesions in varied proportions. Multi system approach is warranted to diagnose GTD and studies proposes that clinico-pathological correlation aids in effective diagnosis of GTD in conjunction with ultrasonographic studies.

Aim: To analyze the incidence of GTD, clinical characteristics, histopathological evaluation with an attempt to study clinico-radio-pathological correlations in different forms of gestational trophoblastic diseases

Methodology: The study was conducted in Department of Pathology, Mahatma Gandhi Medical College& Research Institute, Puducherry from duration between 2014 to 2019 for a period of 6 years as a Quantitative observational and analytical study including all abnormal cases of gestational related histopathological specimens (Products of conception, evacuation, hysterectomy) referred to the laboratory from clinical side The clinical details including patients obstetric history, biochemical parameters like hCG levels, ultrasound findings, etc. were documented to attempt correlation

Conclusion: Any pregnant women presenting with abnormal uterine bleeding should be evaluated for underling presence of any GTD. Histopathological evaluation stays as gold standard procedure whereas ultrasonography is significant in detecting GTD lesions preoperatively thereby aids clinicians in proper planning of treatments.

Placental Trophoblastic cells are dynamic components which proliferates physiologically and instances pathologically evidenced by invasion into myometrial or other systemic organs with potential to metastasize to distant site.1, 2 Spectrum of pathological lesions induced by trophoblastic cells are encompassed under the entity ‘Gestational Trophoblastic diseases’ (GTD). 2, 3 World Health Organization (WHO) defines GTD as an heterogeneous group of inter-related pathological lesions which are derived from the lining trophoblastic epithelium of the placental tissue owing to the cause of abnormal fertilization.4, 5 It includes both non-neoplastic and neoplastic lesions even with metastatic conditions with a common denomination factor of abnormal proliferation of trophoblasts.

Various factors had been postulated for etiopathogenesis which includes chromosomal abnormalities, maternal factors, GTD has been estimated with an occurrence incidence 0.5-3/1000 pregnancies among Asian population mostly affecting women of 30 years of age. 6 With regard to clinical presentation, vaginal bleeding and gynaecological morbidities are the usual presentations which is marked by raised in level of β-hCG (usually ˃10,000mlU/ml). Syncytiotrophoblasts present as outer lining is assigned with function of producing hCG from early gestation which is used as an biochemical indicator to mark the stages of pregnancy. 7 Cytotrophoblasts are cells lining the inner layers and are primitive cell nature with high proliferating capacity. 8 Based on the cell proliferation nature, WHO in the year 2012 had recently classified GTD which included the following entities:

Several studies had been conducted on toxemic pregnancies and its associated morbidities whereas analysis on GTD are relatively sparse owing to the reason of uncommon incidence in developed nations.(7,8) However in Tropical countries like India, the incidence is comparatively higher and becomes as an unique challenge to our health care system due to delayed diagnosis or presentations. 9

Global reports states that incidence of GTD are from Asian countries especially among low socioeconomic status, low literacy status or poor antenatal care which are the essential contributing factors focusing the need for the index study to be carried out in larger extent. In India the ratio of GTD is 0.5 to 2/1000 deliveries with a ratio of 1:235 deliveries. 10, 11

Thus the importance of prompt and early diagnosis is emphasized to initiate appropriate therapy. Multifocal approach is required for effective diagnosis since serial rise in hCG levels would be noted in non-gestational conditions and other genital tract tumours as well. 12, 13 Thus hCG is a sensitive marker but less specific for diagnosing trophoblastic related disorders. 14, 15 Thus GTD being a common health care problem in Indian set up, it is essential to undertake clinicopathological analytical studies as a collaboration between the Obstetrician and Pathologists. 16

The present study was conducted with a novel aim to emphasize to better understanding of GTD in terms of incidence, geographical distributions, clinical presentations, importance of histopathological evaluation and need for clinio-radio-pathological correlation as a quality assurance with its increased patronage. The study was conducted with an expected implication to provide essential additional data to the existing ones on GTD.

The study was conducted in Department of Pathology, Mahatma Gandhi Medical College& Research Institute, Puducherry from duration between 2014 to 2019 for a period of 6 years after obtaining ethical clearance with IRB Number wide 14/207/909.

All abnormal cases of gestational related histopathological specimens (Products of conception, evacuation, hysterectomy) referred to the laboratory from clinical side

Non-gestational tissue was excluded from the study

The specimen received in the histopathology laboratory was fixed, subjected to grossing and processing. The processed tissue was embedded with paraffin block and subjected to sectioning at 2- 4 microns and then staining by Hematoxylin & Eosin (H&E). All the laboratory procedures were performed as per standard operating protocol of the laboratory. The stained slides were examined under light microscope for detailed histological evaluation and the diagnosis was arrived as per recent WHO classification of GTD 2012.

Analysis of results was performed using Microsoft Excel, analyzed data using descriptive statistics, with frequency and percent and the result was presented using tables. The level of significance was set at 5%. The Statistical Package for Social Sciences (SPSS) version 21.0 was used for the statistical analysis.

Ethical consideration: Institute Ethics committee clearance was obtained and its terms were strictly adhered during the full conduct of the study analysis.

The study included 160 cases of histologically diagnosed GTD and analysed the parameters of GTD inference to clinical presentations and biochemical parameters. The studied number of cases accounted for 1.4% of overall deliveries conducted in the institution, thus the average prevalence of GTD in the hospital was 4/1000 deliveries [ie-0.4% with a ratio of 1:270]. Among the studies cases products of conception was 140 cases with clinical diagnosis of partial mole as major indication where as hysterectomy was 20 cases mostly constituting complete mole and choriocarcinoma as shown in Table 1.

Distribution of GTD cases in reference to specimen

Distribution of age in various types of GTD

Gestational age was calculated according to weeks and categorized into groups as early and late pregnancy. First trimester showed highest incidence of GTD followed by second trimester as shown in Table 3. With regard to GTD, hydatid form mole was the common form followed by PSTT and CC.

In context to clinical presentation, bleeding per vagina was the predominant presentation followed by amenorrhea and lower abdominal pain as shown in Figure 1 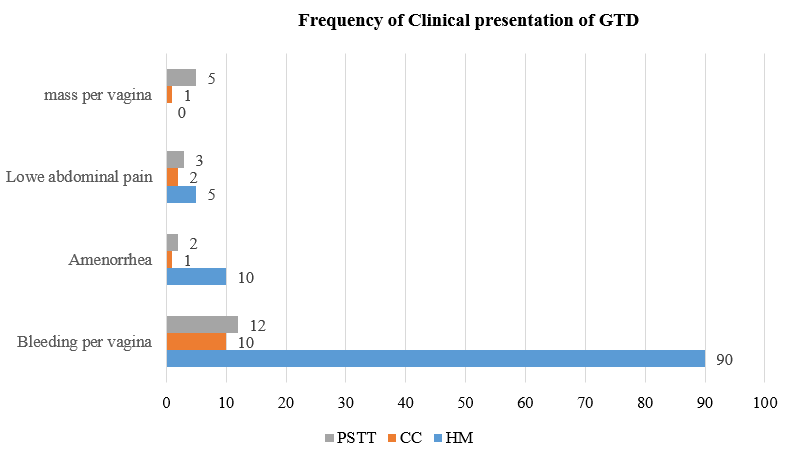 The sensitivity and specificity was calculated keeping histopathology as gold standard analytical tests and the observations are shown in Table 4. 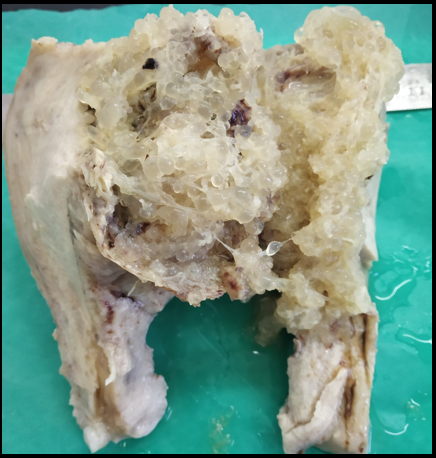 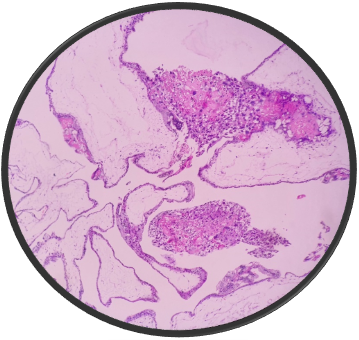 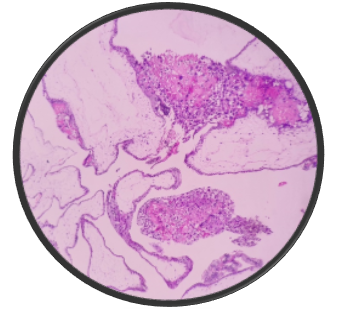 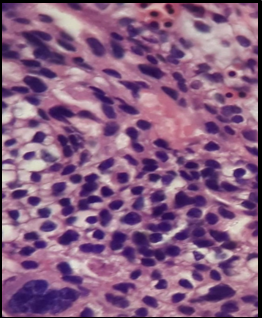 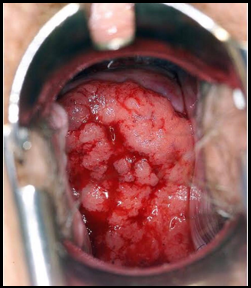 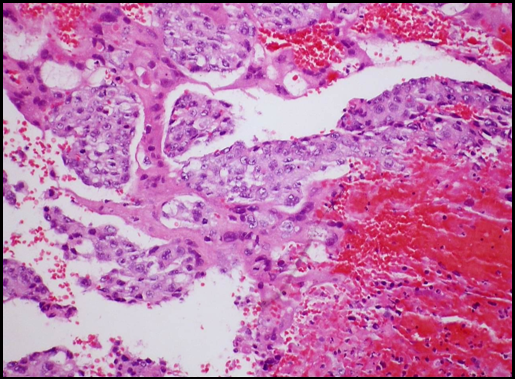 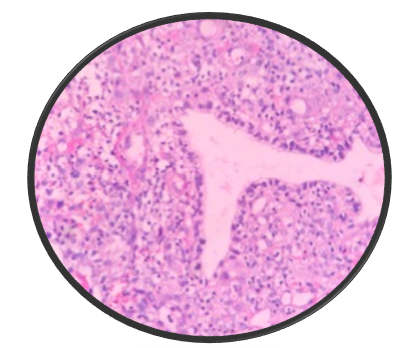 The present study included 160 cases of GTD in various frequencies in terms of categorization. Syncytiotrophoblasts being matured cell type in multinucleated forms, it comes in first contact to maternal circulation with assigned function of producing hCG whereas cytotrophoblasts are concerned with proliferation activity.1, 2 GTD diagnosis on Ultrasound examination is a challenge to the Clinicians due to many mimickers especially with placental development and non-molar pregnancies, thereby warranting histopathological correlation.3, 4

GTD includes wide spectrum of tumours associated with proliferation of pregnancy related trophoblastic cells which at instance progresses even to malignancies.5, 6 Incidence of GTD varies according to geographical distribution with relatively higher incidence in Asian countries and Latin America.7, 8 The study included 160 cases of GTD with an incidence of 4/1000 deliveries with no report on extra-uterine GTD. The incidence of GTD correlated well with the observations of Agarwal A et al, Koirala A et al. which showed an incidence of 5/1000 deliveries at an average.8, 9 The study observation varied from observations done in Western countries due to the differences in incidence and classification and case detection.10

The present study showed age incidence in both extremes young age as well as elderly primi [>30 years] GTD was most commonly found among mothers of above 30 -35 years with an incidence of 37.5% followed by age group above 35 years [24.4%] and 20 years [15.5%]. The observations are in concordance with the findings done by Taboo ZA etal, Kumar N et al.11, 12

In context to Gestation period, GTD was commonly detected in first trimester [45.5%] followed by second trimester [36%]. Among the cases non-neoplastic lesions was commoner in first and second trimester whereas post-gestational period showed peak incidence in neoplastic lesions [16%]. The observations are in concordance Taboo ZA et al, Kumar etal who also proposed that GTD is more commoner in primagravida as evident in the present study as well.11, 12

With regards to clinical manifestation, bleeding per vagina was the commonest presentation seen among 59% of cases followed by amenorrhea with a frequency of 14%, correlating with the observations of Taboo ZA, Kumar S et al.11, 12

Biochemical marker –Beta HCG being a highly sensitive marker for GTD with a percentage of 86%, it also indicates a spectrum of other lesions thereby with decreased specificity of 57% in GTD.9, 11 In the present the HCG levels ranges between 50000-100000uml in 110 cases indicating the high sensitive nature of the hormone. Not even a single case was observed to have value <50,000 mlU/ml indicating high trophoblastic proliferation in GTD. Serial monitoring of this hormonal level aids in monitoring treatment response and recurrence of neoplastic lesions of GTD.13, 14

Placental site trophoblastic tumour was noted in 17 cases where the tumour was hemorrhagic mass with congestion grossly and microscopically showed large polyhedral cells dispersed in between muscle bundles indicating myometrial invasion. Ultrasonography detected 15 cases thereby proving its high specificity. The two cases which were missed turned out to be decidual cast which is a potential mimickers. The major concern is on treatment modality where PSTT warrants hysterectomy whereas decidual cast warrants evacuation. Surprisingly PSTT being an uncommon tumour, present study showed 17 cases thereby alarming the clinicians as well as the Sonologists to include PSTT as one of the differentials when dealing with GTD

Clinico-radio-pathological correlation stays as a gold standard modality for quality assurance in GTD which was evident in the present study as well where both diagnostic departments showed significant p value as shown in Table 4.

The standard modality of treatment for females who plan to have children in future is to eliminate molar pregnancy by process of suction and evacuation procedure. Whereas women who completed the family can opt of hysterectomy and in cases of neoplastic lesions, patients may warrant chemotherapy and follow up. Hence it is re-emphasized the fact that sonological findings plays as vital role in detection of GTD pre-operatively and judicious Clinico-radio-pathological correlation is warranted to plan subsequent treatment modalities

The incidence of Gestational Trophoblastic Disease is higher among the study population and hydatidiform mole was higher among all the entities of GTD. While partial mole is commoner entity in non-neoplastic lesions, the incidence Placental site trophoblastic tumour was much higher than assumed thereby to include it as one of the differentials in diagnostic departments. Beta HCG was a sensitive marker and aids in detection and follow up of the patients in case of malignancies. Judicious clinic-radio-pathological approach helps the clinician to plan their treatment modalities especially to decide on evacuation versus hysterectomy. Thus multi-centered are warranted in Indian population to analyze the incidence and outcome of gestational trophoblastic diseases that aids in public health Research and Development.

Limitation of the study

Cytogenetic studies and molecular analysis was not performed due to limited resource facilities.