General and laboratory characteristics of Influenza A H1N1 patients

Introduction: Over the years, nature has witnessed the occurrence of pandemics caused by influenza viruses of different strains due to their unique capability of antigenic variations and aggressive behavior. This study aims to understand and document the general characteristics and biochemical findings of Influenza A H1N1 infection.

Materials and Methods: This study revolved around hundred patients presenting with influenza like illness. The general, clinical and relevant laboratory investigation findings of Influenza A H1N1 positive patients were studied and documented

Results: Out of hundred patients with influenza like illness, sixty-five positive patients were studied excluding the thirty-five negative patients. The age range of the patients was wide from 1 month to 75 years, with seven cases having had comorbid conditions and six cases with history of exposure. Fever was the most common symptom in all cases, followed by cough, sore throat, nasal catarrh, difficulty in breathing and vomiting. Fourteen patients took liver function tests among whom eight showed elevation of enzymes and two out of twenty-one tested had hypokalemia.

Conclusion: The unpredictable nature, varied clinical and laboratory expressions of the disease make it essential to study and understand the various characteristics of the Influenza A H1N1 infection

The year 2009 saw the unfolding of a unique strain, of a virus named Influenza A H1N1, with the first cases being reported from Mexico in March. In a span of three months it was declared a pandemic by the WHO.1

With a distinct combination of gene segments from swine, avian and human lineages, this new virus, with a strain different from that seen in the past, overcame the complex species barrier to infect humans, leading to influenza-like symptoms and progressing in a few cases to viral pneumonia, respiratory failure, multiple organ failure and death. 2

The occurrence of the 2009 H1N1 virus is an unparalled event in modern virology as it neither fits the classic definition of a new subtype nor drift with no previous infection experience and without direct evolutionary relationship with the recently circulating H1N1 viruses of human origin. 3

The clinical course being mostly benign with symptoms being mild and subclinical, Pneumonia, is the most common and important complication. 1 Rate of illness, hospitalization and death have varied widely according to country. Diffuse viral pneumonitis associated with severe hypoxemia, ARDS, and sometimes shock and renal failure are the frequent reasons for hospitalization and intensive care. 4

Influenza-like illness (ILI) is defined by the CDC as fever (temperature ≥100°F or 37.8°C) and either cough or sore throat in the absence of another known cause. A confirmed case of 2009 H1N1 infection is defined by ILI with positive test results for the 2009 H1N1 virus by either real-time reverse transcriptase polymerase chain reaction (rRT- PCR) or viral culture. A probable case is ILI with positive influenza A test results but negative results for seasonal H1 and H3 by rRT-PCR. A suspected case does not meet either definition but is either a person younger than 65 years hospitalized for ILI or a person of any age with ILI and an epidemiological link to a confirmed or probable case within 7 days of illness onset. The 2009 H1N1 influenza can be contracted through 3 routes: contact exposure (when a contaminated hand is exposed to facial membranes), droplet spray exposure (when infectious droplets are projected onto mucous membranes), and airborne exposure (via inhalation of infectious airborne particles). 3

One hundred patients, admitted to hospitals attached to JJM Medical College Davangere, presenting with Influenza like illness were tested for Influenza A H1N1 by Rapid SD BIOLINE influenza antigen test kit in clinically directed cases and by rRT-PCR, in category C patients using throat swab, sent to department of Virology, NIMHANS, Bangalore through the DSO. Patients who took rapid screening test were all negative. rRT PCR proved cases were included in the study. Out of hundred patients, sixty five were positive and thirty five were negative. In this study general, clinical characteristics and relevant laboratory investigation findings of rRT-PCR tested, positive, patients were studied and documented.

This study was done during July 2009 to June 2011.From the hundred patients with influenza like illness, sixty five patients proven to be positive for Influenza A H1N1 via rRT-PCR test were included and the rRT-PCR negative thirty five patients were excluded. 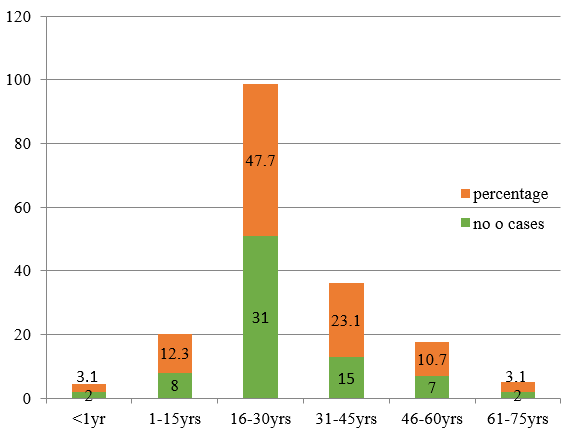 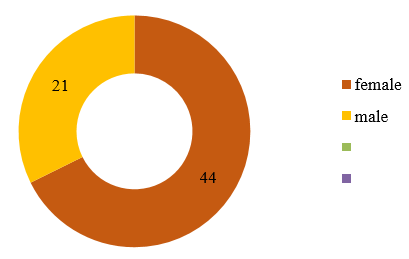 Seasonal distribution of the patients 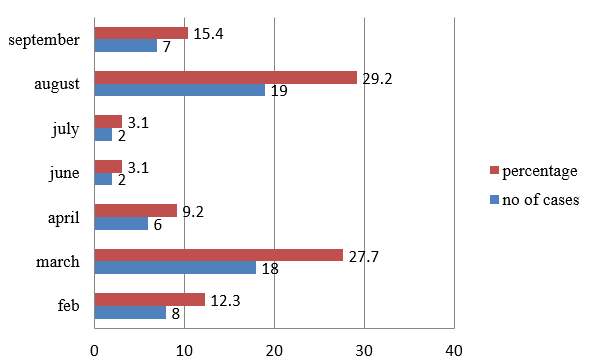 All sixty five patients had fever, while the least common symptoms were headache and irritability seen in 2 and 1 patient respectively. Second most common symptom was cough seen in 63 cases followed by sore throat (54), nasal catarrh (42), difficulty in breathing (29), diarrhea (11) and vomiting (3)(Figure 4)

Most of the cases were young adults and middle aged in the age range of sixteen to forty five years, amounting to (70.8%), similar to studies by Mu YP et al, 2 Jain S et al,5 Ong AK et al6 and Duque V et al.7

Similar to patients in study done by Duque et al7 and Ong et al,6 the frequency of symptoms was fever, cough, sore throat, nasal catarrh, breathlessness, vomiting and diarrhea in that order in our study as well. Whereas cough was the most common symptom followed by fever, sore throat, nasal catarrh, breathlessness and vomiting in Chudasama et al8 study.

Like seasonal influenza, a great majority of cases have fever, cough, sore throat and runny nose. What is critically important, however, is that in a small proportion of patients, the clinical course tends to deteriorate rapidly, leading to complications and death.2

Coexisting conditions like diabetes and cardiovascular, neurologic, and pulmonary diseases, including asthma have been reported in patients, hospitalized with influenza like illness.9

The coexisting conditions seen in patients in our study were low in number, which were diabetes mellitus (4), asthma (2) and pregnancy (1) similar to study done by Chudasama et al,8 out of two seventy four cases ninety cases had comorbid illness. Diabetes was seen in twenty cases, fifteen cases had chronic pulmonary diseases and fifteen cases were pregnant.

The extent to which these comorbidities contribute to severity of disease is unclear because a large portion of the aboriginal population (which may be a risk factor itself on the basis of genetic susceptibility) often have such comorbidities.10

The infectious particles of the H1N1 virus are estimated to be less than 10 mm in size and normal room air currents can keep them airborne for long periods of time. These particles are easily spread unless adequate protection and control are provided.6

Hypokalemia was seen in two cases when compared to 88/225 cases in study done by Cao B et al12 in China.

The clinical manifestations of influenza A H1N1 virus infection range from self- limited uncomplicated sub febrile respiratory illness to severe and even fatal respiratory disease and extrapulmonary disease. Gastrointestinal symptoms include vomiting, diarrhea and abdominal pain.

Since Influenza A H1N1 is unpredictable in its presentation, etiological diagnosis based on clinical presentation may be difficult. H1N1 infection should be considered in the differential diagnosis for patients presenting with fever, cough, sore throat, nasal catarrh, difficulty in breathing or pneumonia