Background: The salivary glands are the site of origin of a variety of neoplasm and are also relatively uncommon accounting for <1% of all tumors. Histopathological examination/study plays a major role in the diagnosis of these neoplasms. The aim of the study is to recognize various histomorphological patterns of salivary gland lesions, their frequency, age, gender and site wise distribution

Materials and Methods: this study was conducted for two years (Nov 2018-Nov 2020) in the department of pathology KBNIMS, kalaburagi. Total number of salivary gland lesions included were 50. Specimens were processed and stained by hematoxylin and eosin stain followed by microscopic examination.

Salivary glands are unique among the secretary glands with a more heterogenous group of tumors showing greatest histological diversity. Salivary gland system includes three pairs of major glands – Parotid, Submandibular and Sublingual and many minor glands in the mucosa of the oral cavity, lips, floor of mouth, gingival, cheek, hard and soft palate, tonsillar areas and oropharynx.1 The spectrum of salivary gland lesions is wide and the relative incidence of neoplastic versus non neoplastic lesions is variable in different studies.2 Salivary gland tumors account for 2% of all human neoplasm and relatively uncommon.3 Salivary glands tumors are rare with annual incidence <1/100000 inhabitants. These tumors show wide range of morphological diversity between different tumor types and sometimes within an individual tumor mass. 4 About 65% to 80% arise within the parotid, 10% in the submandibular gland and the remainder in the minor salivary glands including the sublingual gland.5 Tumors have the highest chance of malignancy if they arise from retromolar area(89.7%), floor of mouth(88.2%),tongue(85.7%)and sublingual gland(70.2%) whereas only 20% of all parotid tumors are malignant.6

The aim of the study is to recognize various histopathological patterns of salivary gland lesions, their frequency, age, gender and site wise distribution.

The present study “Histopathological study of salivary gland lesions” is carried out in the Department of Pathology, KBNIMS, Kalaburagi. It is a two year retrospective study from November 2018 to November 2020. The blocks were retrieved and sections were cut and stained with Haematoxylin and Eosin. Information regarding age, sex, site, complaints, clinical and radiological findings were recorded from requisitions received in the histopathological department. Special stain PAS was used when required. The tumors were classified into nonneoplastic and neoplastic lesions according to WHO histological typing of salivary gland tumors.

Most of the cases showed male predominance and were commonly found between the age group 31-40. 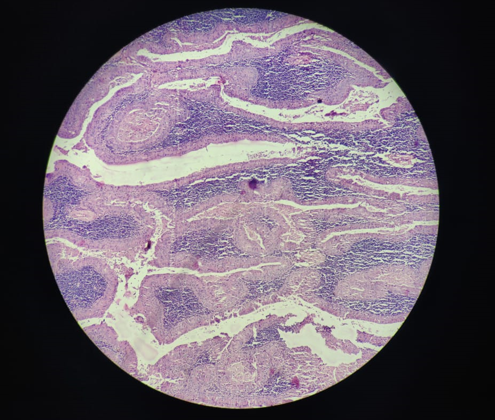 Epithelialmyoepithelial carcinoma: Tumor cells are arranged in ducts with outer rim of myoepithelial cells and inner layer of ductal cells. 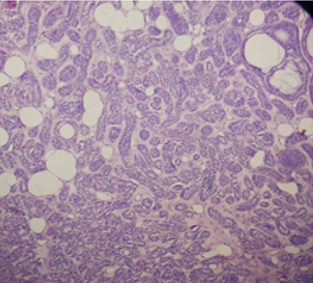 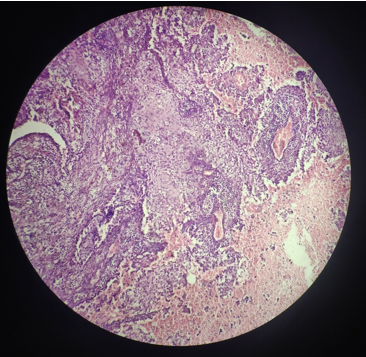 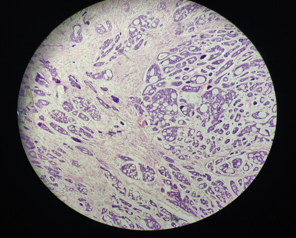 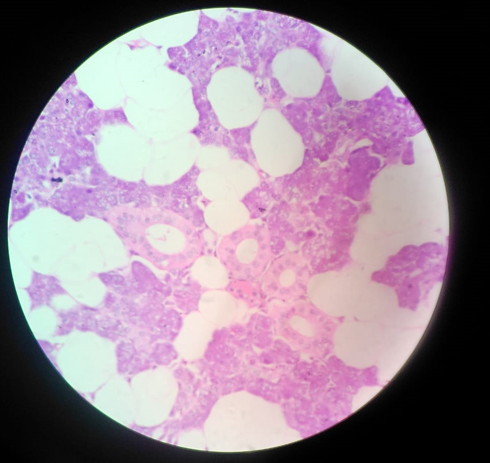 Total number of salivary gland lesions includes 50 cases. Predominantly the cases were found in the age group of 31-40 which was similar to Syed imtiyaz et al study.

Comparative analysis of salivary gland lesions in males and females.

Most common site involved was Submandibular gland followed by Parotid and minor salivary gland in the present study while other studied showed Parotid gland as commonest site of involvement.

Among nonneoplastic lesions, most common lesion encountered was chronic sialadenitis and it was similar to Anita et al study.

Among neoplastic lesions, most common benign lesion encountered was Pleomorphic adenoma and it was similar to Anita et al study.

Among neoplastic lesions, most common malignant lesion encountered in the present study was Mucoepidermoid carcinoma and it was similar to Anita et al study. Epithelial myoepithelial carcinoma, a rare tumor was also found in our study.

Histopathological examination remain gold standard for diagnosis of salivary gland lesions, it helps to differentiate between nonneoplastic and neoplastic lesions and deciding course of management. Hence the study was carried out.