Aim:To study the histopathological changes observed in suspected malabsoption cases including Celiac disease (CD) with emphasis upon the Intraepithelial Lymphocytes (IELs) and to have a clinico-pathologic correlation.

Settings & Design: This was a 2 year prospective study of cases presenting to gastrology OPD with suspected malabsorption selected for duodenal biopsy.

Materials and Methods: Haematoxylin and Eosin (H&E) stain was used for study of histological parameters. IEL counts were correlated in CD3 immunohistochemical (IHC) stain. Clinical and laboratory parameters were correlated wherever available.

Statistical Analysis: The variables were expressed as mean ± SD. Chi - square test or independent T test was used for comparison of variables. p value was < 0.05.

Conclusion: A complete clinical, endoscopic, serological and histopathological evaluation is essential for diagnosis of CD cases. Raised IEL in duodenal biopsies can be a very useful initial indicator for detecting many latent or subclinical CD cases.

CD (Celiac disease) is an autoimmune enteropathy, triggered by ingestion of proteins (gliaden, secalin) present in wheat, barley, rye and oats.1, 2 The prevalence of celiac disease is 1.23% in northern, 0.10% in southern India and 0.87% in north eastern regions of India due to specific dietary habits in these regions.3 Duodenal biopsies reveals mucosal damage classified according to Marsh-Oberhuber.4 Serologic tests are essential for confirmation of such cases.5 We have undertaken this study to analyse various histopathological features in suspected malabsorption cases in duodenal biopsies of CD cases in conjunction with clinical and laboratory parameters.

The present study was conducted in our institute from September 2018 to August 2020. During the two years study period, patients who presented to medical gastroenterology outpatient department with complaints of chronic diarrhea (diarrhoea lasting for more than four weeks), dyspepsia, fever, pain abdomen, vomiting, loss of appetite or weight loss, pallor due to anaemia, nutritional deficiencies (iron, folate, vitamin D), weakness underwent subsequent endoscopic biopsy of duodenum. So endoscopic duodenal biopsies of non neoplastic,suspected malabsorption cases with raised IELs were included in the study. Polyps and neoplastic conditions were excluded. Even inadequate biopsies those which were not properly oriented and tissue sections lost during processing were not taken. Multiple filter paper mounted duodenal specimen fixed in 10% buffered formalin were used. All tissues were embedded in paraffin blocks. 4-5µm thick sections taken and were stained with hematoxylin and eosin stain.

The different histopathological parameters studied were

IEL: IELs were counted at villous tip and base of villi of properly oriented duodenal biopsies of the total 164 patients. Number of IELs per hundred enterocytes in five consequetive villi tip (twenty enterocytes in each villi) were counted. The upper limit of normal range for IEL: in villous tip = 20 IEL/100 enterocytes and at the base of villi = 18 IEL/100 enterocytes.6 Immunohistochemistry (IHC) CD3 was done for all cases. The antibodies and chemicals were procured from Dako, Denmark (Rabbit Anti-CD3 Monoclonal Antibody (Clone EP41). The T lymphocytes take membranous positivity for CD3. Small intestinal tissue from resected specimens were taken as positive internal control.6 Count was done similarly as in H and E stain. Other anciliary tests were correlated whenever possible. e.g.

The categorical variables were expressed as frequency and percentage.Quantitative variables with symmetrical distribution were expressed as mean ± SD and with asymmetrical distribution presented as median and range. To compare between categorical variables, either Chi - square test or Fisher‘s exact test was used and to compare between the quantitative variables, either independent T test or Wilcoxon Ranksum test was used based on the distribution of data. Statistical significance was defined as p < 0.05. All the analyses were carried out using a standard statistical software Stata 18.0. 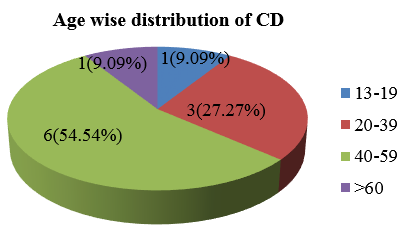 Raised IELs in villi along with widening and moderate degree blunting of villi (1:1) in a case of Celiac disease. (H &E 200x), Figure 2b: Corresponding section of duodenum with IHC, CD3 highlighting the IELs. (200x)

Marsh and Oberhuber Grading of CD 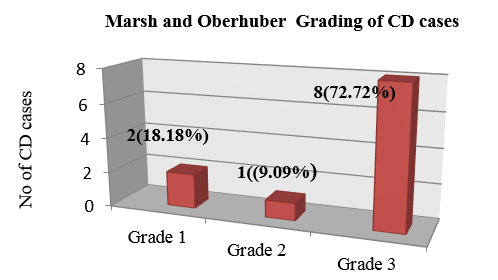 Comparison of clinical parameters between CD and NCD.

Comparison of Laboratory Parameters between CD and NCD.

Comparison of endoscopy findings between CD and NCD.

Comparison of IEL count between CD and NCD.

Celiac Disease Cases with IEL count at villous tip & base in H &E and IHC CD3.

Comparison of histological features between CD and NCD.

Comparison of Other histological features between CD and NCD.

Increase in villous intraepithelial lymphocytes in duodenum when present whether carries significance or not is a matter of debate since last two decades. According to few authors it is nonspecific contradictory to few other studies. Though increased IEL with normal villous architecture is classified as grade 1 in CD, there are many other diseases with similar histologic findings. The specific diagnosis is difficult in many cases as in the preclinical stages of malabsorption minimal villous intraepithelial lymphocytes are seen.5

In a study done by Ian S. Brown et al in 150 serological positive for CD patients, age range at the time of diagnosis varied from 1 to 84 years, with 14.7% of patients aged 60 years or more. This reveals that CD can present can be in late age also. Similarly in our study 19 (18%) patient presented at later age i.e more than 60 years of age.7

Male: female ratio of CD in our study was 2.6:1. This is different from Priyavadhna et al and Ian S. Brown study. In both these studies ratio shows a female dominance though the reason for this is uncertain.6, 7 Males and females were equal in number in a study of 60 CD cases by Mokhtar et al which also differs from our study. In our study there were only 11 cases of celiac disease. Number is too less to opine anything significant.8

11(6.6%) of CD cases were diagnosed in our study whereas in a South Indian study Priyavadhana et al (2017) founded 16 (15.8%) cases. Yadav P et al included 94 subjects in their study and reported CD in 61(64.9%).4, 6 The high prevalence of CD may be primarily due to particular diet in Northern India in addition to increased awareness amongst people, better and sensitive screening techniques and recognizing the early changes in histopathology of biopsy specimen. In our study CD cases are less because of dietary habit and unawareness amongst the people.4

In CD cases of our study, anemia (pallor) was the most common presentation (5,20.83%), similar to Priyavadnam et al, Varma S et al, Mahadev et al.6, 9, 10 In the present study mean Hb was 8.98±1.32 gm/dl, which was similar to Yadav P et al.(8.8 gm/dl) and Priyavadhna et al study (6.4 gm/dl).4, 6 3(2.85%) cases of CD presented with iron deficiency in current study. In contrast Priyavadhna et al (5,31.3%), and Yadav P et al(54, 88.5%) and Houria Chellat et al (29,6.63%) have reported IDA in more number of CD cases than ours.4, 6, 11 Similar to present study Mahadev et al have observed no history of dietary sensitivities, allergies or history of intolerances to gluten or wheat containing products. None of their cases neither ours had a family history of gluten sensitive enteropathy.10 LFT parameters was raised in 3(27.27%) patients of CD in our study. This correlates to observations by Rubio Tapia et al, Maggiore et al and Rostami-Nejad et al. They found raised transaminase level in celiac patients. This could be due to mild dyfunction of liver and a histological picture of nonspecific reactive hepatitis (known as celiac hepatitis) in CD cases.12, 13, 14 Though LFT is deranged in some cases we have not studied the liver biopsy for correlation. In our study in 11(78.57%) out of 14 suspected CD patients, serology report was available. Out of these 11 cases a raised anti-Ttg was present in 7(0.50%) cases, raised IgA noted in one and IgG level was raised in 3 of the cases. Compared to this in Mahadev et al have reported only 3 of 11 patients had positive coeliac serology with positive anti-endomysial antibodies.10

In the present study in 11 cases of CD the mean of tip IEL in H & E was 44.72±26.9. It was much higher than mean of total raised IEL of total cases at 24±15.73. This is similar to S.Pellegegrino et al, Biagi F et al, Jarvinen TT et al, Mokhtar et al and Prasenjit Das et al.8, 15, 16, 17, 18 Thus higher villous tip IEL points towards the suggestive diagnosis of CD. Contrary to this Shmidt et al have observed no correlation between CD and numbers of IELs. This variation in counts could be due to subjective differences in counting of IEL and use of IHC reduces this difference. The variation in counts can also be due to technical variations in thickness of histological sections.19 In our study 89(94.6%) patients of non CD origin had raised IEL (villous tip) in CD3. Priyavadhana et al have demonstrated 37(36.6%) patients of non CD with increased IELs.6 In cases of CD, in our series the sensitivity of IEL at tip in H &E was 14.3% and specificity was 100%. Goldstein and Underhill in their study found a high sensitivity (75%) but a low specificity (25%) contradictory to our study. 20

In the present study villous blunting was present in 8(72.72%) out of 11 cases of celiac disease whereas blunting in Priyavadhana et al and Mokhtar et al was present in all cases of CD. In our study more number of cases of CD showed mild blunting (5,23.81%) whereas in their studies marked to complete villous atrophy were seen in more cases, 43.75% and >80% respectively.6, 8 In present study villous flattening was not found in any of our CD cases similar to Goldstein and Underhill et al. 20 In our study crypt hyperplasia was present in both CD and NCD cases (in raised IEL cases ) whereas Priyavadhana et al observed crypt hyperplasia in patients of CD only and it was not a feature in NCD.6

In the present study of CD cases 8(72.7%) out of 11 were graded as Marsh 3.Similar findings in Mokhtar et al study where marsh 3 was the most reported grading for CD cases. This may be due to late presentation of cases, a result of unawareness of the disease among the general population.8 In our study in cases of CD, no significant correlation was found between IEL and gender (p=0.391), clinical symptoms (p>0.05), and severity of inflammation in lamina propria (p=0.076) similar to a study by Mokhtar et al in CD cases.8

Advantage of our study

Our study emphasizes that the subtle histopathological changes in duodenal biopsies in correlation with robust clinical, biochemical, serological and endoscopic findings may be significantly useful in identifying many subclinical CD patients.

Lack of serological testing for tTG (both IgA and IgG) as a screening tests in many cases due to unawareness and low incidence in the study group.

Celiac disease should be interpreted in association with complete clinical, histological and serologic work up. Endoscopic findings give significant initial clue for presence of CD and serological test are necessary for confirmation.