Devi, Devi, and Singh: Expression of P16 and KI-67 in cervical intraepithelial neoplasia and carcinoma: An institute based study

Expression of P16 and KI-67 in cervical intraepithelial neoplasia and carcinoma: An institute based study

Background: Cervical cancer is one of the leading causes of cancer death in Indian women Cervical cancer screening programme worldwide are moving from primary cytology to human papilloma virus (HPV) DNA testing, which is the major risk factor for cervical carcinoma.

Objectives: To study the expression of P16 and KI-67 in cervical intraepithelial lesions and carcinomas and to calculate diagnostic accuracy of these biomarkers as compared to routine histopathology findings on equivocal cases

Material and Methods: Evaluation for p16 and ki-67 immunoexpression was done in 102 cervical tissue samples. Informed consent, details of the patient regarding age, occupation, religion, parity, symptoms, any prior abnormal pap test, HPV DNA test if any, etc. were taken before procuring the samples.

Results: The benign lesions were negative for both p16 and ki-67 immunoexpression whereas the premalignant lesions showed increasing positivity with the higher histological grade. All the malignant lesions were positive for ki 67 and p16 except for one case The specificity was highest when both the markers were used together.

Conclusion: Correlation of p16 and ki-67 biomarkers and histopathology findings increases the diagnostic accuracy of premalignant and malignant cervical lesions which may be useful in cases with equivocal histologic features

Cervical cancer is one of the most common cancer in women though different parts of the world have varied incidence rate.1 The incidence have now fallen in most of the developed countries. However, in most of the developing countries the incidence rate remain unchanged or have risen.2 In 2018, India recorded 97,000 cases and 60,000 deaths which is the highest number of death due to cervical cancer.3 With the recognition that virtually all cervical cancers are caused by infection with high risk(carcinogenic) HPV types, testing for HPV DNA are now developed to improve cervical screening strategies, which is widely accepted as a strategy to decrease the incidence of cervical cancer and mortality related to it.4

About 70% of cervical cancers are caused by HPV-16 and HPV-18 types and HPV-16 alone is responsible for 50% of all the cervical cancer worldwide. The expression of several host genes is affected by the oncogene products of HPV, including those involved in cellular proliferation, such as Ki-67 and cell cycle control, such as p16. Immunostaining for p16 is an effective biomarker of cervical disease.5, 6 However, since some benign cervical epithelial cells can exhibit p16 expression, evaluation of p16 staining requires additional morphological evaluation.7 Ki-67, a marker for cell proliferation, is particularly helpful in cases where p16 staining is inconclusive or technically inadequate.8 Recently, a double- label immunostain for p16 and Ki-67 was developed that allows recognition of abnormal cells simply based on co-staining of the two markers in the same cell.

It is a Hospital based cross sectional study conducted from August 2018 to January 2020, consisting of 102 samples.

Cervical biopsy and hysterectomy specimen with prior radiotherapy or chemotherapy, prior treatment for cervical diseases like cryotherapy, LASER therapy and loop electrosurgical excision process, pregnancy and patients who do not want to participate in the proposed study.

The cervical tissues were fixed in 10% buffer formalin, processed and sections of 3-5 micrometer thickness were prepared from the paraffin blocks, deparaffinised and stained with haematoxylin and eosin for light microscopy.

For immunohistochemical staining, sections of 3-5 micrometer thickness made in poly L Lysine coated glass slides were kept overnight at 30-35 degree Celsius, deparaffinised and rehydrated. Antigen retrieval was done by pressure cooker method after keeping the slides in TRIS buffer (pH 9) filled container for 3 minutes at approximately 120 degree Celsius. After antigen retrieval, the slides were washed with phosphate buffer solution (pH7.2-7.6), blocking reagents added, followed by addition of primary antibody, incubation at room temperature in humidity chamber for 30 minutes. After washing with PBS, secondary antibody was added, incubated again for 30 minutes and washed again with PBS. DAB chromogen are added to the slides and after 10 minutes, washed with distilled water which is followed by clearing and mounting.

Staining in the upper two third of the epithelium was scored as positive, using scores from 1 to 3.9

Staining is nuclear as well as cytoplasmic and was scored as diffused if continuous staining is seen in the horizontal plane, either partial or full thickness. If staining is interrupted in this plane, it was scored as focal. Weakly diffuse staining, characterized by a “blush” was scored as negative.

The results obtained were entered in MS Excel and analysed using SPSS 22.version and the following statistical analysis were calculated:

Approval of the institutional ethics committee, was obtained, informed written consent was taken and confidentiality of the patient was strictly maintained.

Distribution of cases and their percentage 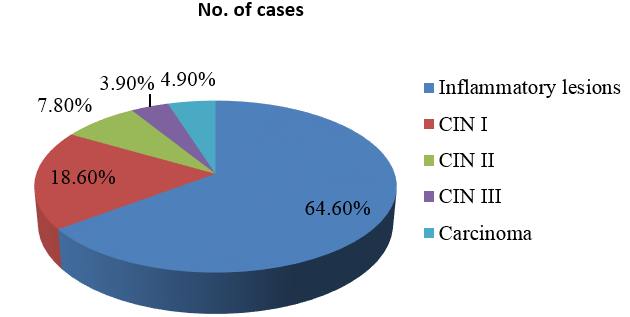 The age of the patients in the study as shown in table 3 ranged from 28 to 78 years with the mean age of 47.34 years. Majority of the cases were in age group of 40 to 49 years while most of the benign lesions were seen in the < 50 years age group and malignant cases were observed in the above 50 years age group. (Table 2)

Frequency of the parity, symptoms and marital status of cervical intraepithelial neoplasia and carcinoma

The p16 and ki-67 immunoexpression were evaluated in all the cases and correlated with the histopathological findings. (Table 4). In inflammatory lesions, no immunoexpression of p16was observed. Ki-67 expression in such lesions were also taken as negative as immunoexpression was not observed in the upper 2/3rd of the epithelium. Positive immunostain for p16 were observed in 26.3%, 50%, 75% and 80% of the cases of CIN I, CIN II, CIN III and carcinomas (Table 4) respectively. This may be due to association of HPV with high grade dysplastic lesions and malignancies of cervix. KI-67 immunostain was positive in all cases of carcinoma (Table 4) and in cases of CIN, the rate of Ki-67 positivity increases with increasing severity of dysplasia.. Both p16 and Ki-67 expression with various cervical lesions were highly significant as p < 0.05.(Table 4)

Results for p16 and ki-67 expression of study cases

The performance of p16 and ki-67 in determining the lesions ≥ CIN II were studied and the results are shown in Table 5. The specificity was highest when both the markers were positive i.e. 97.65%. 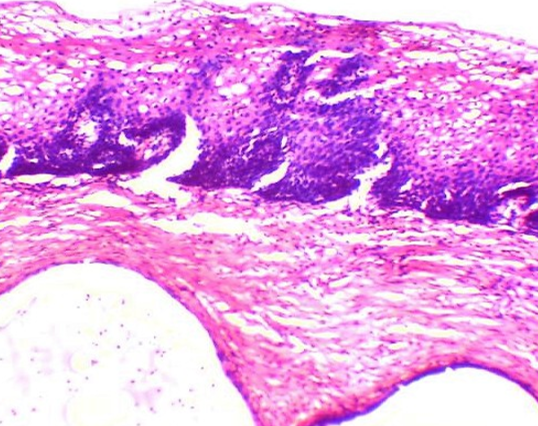 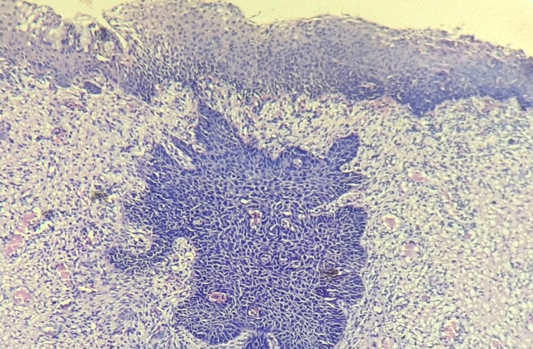 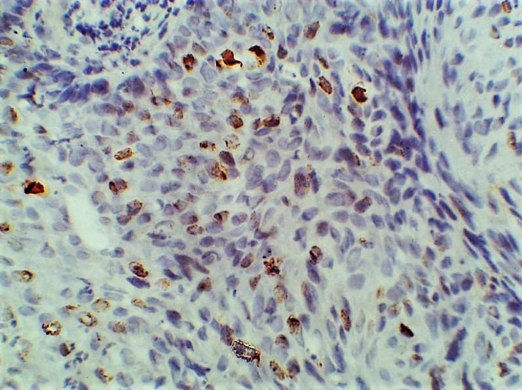 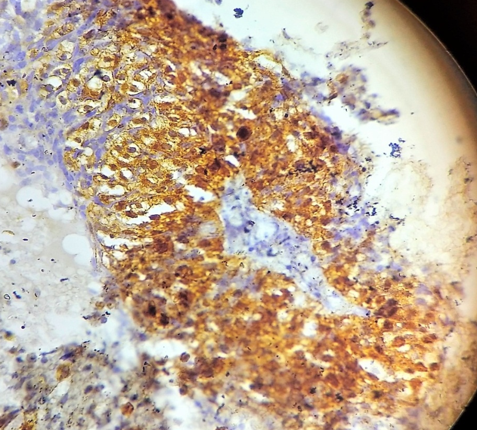 Histopathology is the gold standard for diagnosis of squamous intraepithelial lesions and invasive carcinoma. However, because of the inter-observer variations, better biomarkers have been used to assist in some cases with equivocal pathologic features.

In the present study, the maximum patients with cervical lesions were in the age group of 40 to 49 years. Chhabra et al10 also observed that more than two thirds of the women with various cervical lesions were in the reproductive age group, collaborating the fact that sexually active women in the reproductive age group have a higher chance of having an unhealthy cervix. Similarly, in a study conducted by Sharma et al.11 the mean age of patients with cervical lesions was 40.06 years and maximum cases of squamous cell carcinoma were observed in patients > 50 years of age which is compatible with our findings.

The most common presenting symptom in the present study was discharge per vaginum in both the premalignant 21(61.7%) and 3(60%) malignant cases, followed by abnormal bleeding per vaginum which correlated well with the study by Pradhan B et al13 and Bukhari et al.12

The Pap smear test is considered as an effective screening method to prevent development of cervical cancer. According to the American cancer society (2012), Pap smear test is a routine cancer screening method that should be done every 3 years for women ages 21 to 65 years and women with 30 years and above can consider Pap testing every 5 years if combined with testing for HPV.14 In the present study, prior abnormal Pap test results were observed in 100% of the malignant cases and 68.4% of pre malignant conditions.

In the present study, expression of p16 and ki 67 and their diagnostic accuracy in cervical intraepithelial neoplasia and carcinoma were studied. 6 cases (31.6%) of CIN I, 5 (62.5%) cases of CIN II, 4 of 4 (100%) CIN III and 5 of 5 (100%) carcinoma cases showed ki-67 expression. There was no ki 67 expression in inflammatory lesions. The expression of ki 67 showed a constant increase with increasing severity of disease. Similar observations were also found in various studies conducted by S Srivastava, 16 Ashok Sangwaiya et al,17 & Kanjana Kanthiya et al. 18

In the present study, there was no expression of p16 in inflammatory lesions. p16 overexpression was seen in 5 of 19(26.3%) CIN I, 4 of 8,(50%) CIN II, 3 of 4(75%) CIN III and 4 of 5(80%) carcinoma which is similar to study conducted by Srivastava,16 Klaes et al19 & Calil LN et al.20 However, one case of carcinoma showed only weak cytoplasmic staining of p16 which was considered as negative and may indicate that p16 negative carcinomas do exist. Such findings were also observed by Volgareva et al.21 The probable explanation could be that in these p16 negative cases there is suppression of its upregulation through epigenetic mechanisms, such as promoter methylation or genetic mechanisms such as deletion or loss of heterozygosity.

S Srivastava MIB-1: An immunohistochemical expression in preneoplasia and neoplasia of the cervixIndian J Pathol Microbiol201053351824