Introduction: Abnormal uterine bleeding is a challenging gynecological problem caused by various endometrial pathologies and is a major clinical problem among women in peri and postmenopausal age groups. The problem is common worldwide but causes may vary from one region to another.

Aims and Objectives: The main objective was to evaluate pathological spectrum of different endometrial lesions in abnormal uterine bleeding and to correlate with clinical history and diagnosis.

Materials and Methods: The study was a prospective study done from August 2017 to July 2019. The specimens received from endometrial biopsy were included in the study. All the specimens were fixed in formalin and processed through paraffin wax embedding method. Sections were cut at 3-5 micrometer thickness and stained by Hematoxylin and Eosin (H&E) stain and were examined under light microscope.

Interpretation and Conclusion: Abnormal uterine bleeding is one of the commonest condition for which patients seek advice in the gynecological outpatient department. Analysis of histopathology of endometrium in abnormal uterine bleeding helps in management of patients and to know the pathological incidence of structural causes in AUB prior to surgery.

The endometrium is uniquely endowed throughout the female reproductive lifespan with a complex of periodic proliferation, differentiation, breakdown and regeneration.1 Abnormal uterine bleeding (AUB) is a symptom and not a disease and it accounts for more than 70% of all gynecological consultations in the perimenopausal and postmenopausal age group.2 AUB is defined as changes in frequency of menstruation, duration of flow or amount of blood loss.3 It includes both dysfunctional uterine bleeding (DUB) and bleeding from structural causes like fibroids, polyps, endometrial carcinoma, and pregnancy complications.4 It occurs in various forms such as menorrhagia, polymenorrhea, polymenorrhagia, metrorrhagia, and menometrorrhagia.2 Endometrium is a hormonally sensitive, dynamic and responsive tissue which constantly and rhythmically undergoes changes in the active reproductive life.5 Wide range of morphologic patterns resulting from both normal and abnormal changes offer a diagnostic challenge to practicing pathologists. Endometrial samplings by dilatation and curettage, endometrial biopsy, pipelle and hysterectomy specimens are chosen methods to evaluate AUB.

Detailed clinical history and relevant diagnostic findings were collected from patients presenting with abnormal uterine bleeding during a period of two years, from August 2017 to July 2019. All specimens were transported in 10% formalin to the Department of Pathology, VIMS Bellary. The tissue bits were processed and paraffin blocks were prepared. Tissue sections (3-5 µ) were cut and stained with hematoxylin and eosin stain (H&E). A detailed histological study was carried out and the findings were noted and classified.

The study material included a total number of 247 endometrial samples (endometrial curettage and biopsy). Age range in the study group was from 22 years to 70 years, thus including reproductive to postmenopausal age group with more number of cases seen to be clustered in reproductive age group (Table 1). Predominant histopathological pattern noted was proliferative endometrium (Figure 1) seen in 23.1% cases (Table 2).

Comparative study of incidence of endometrial hyperplasia in AUB 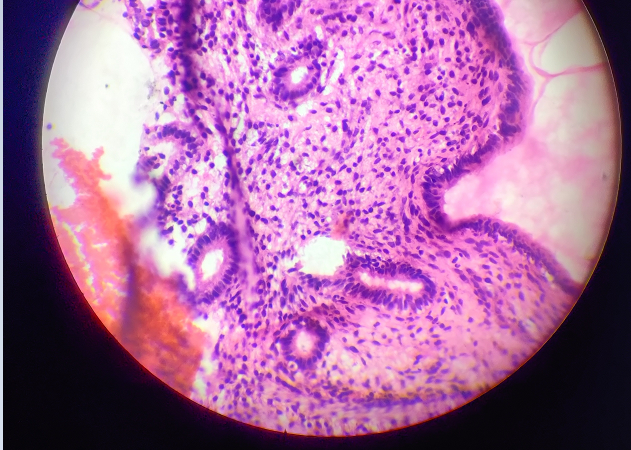 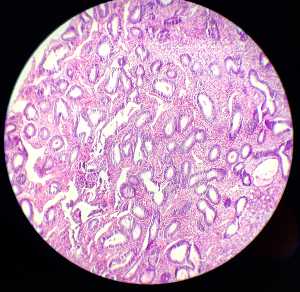 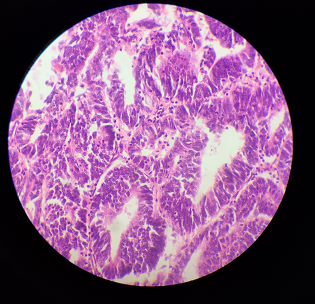 Malignancy in particular is common in patients over 40 years of age. Hence the histopathological study of endometrium in abnormal uterine bleeding in women above the age of 40 years plays an important role in diagnosing various histological patterns and aetiopathological factors. A comparative clinicopathological study will help in arriving at the cause and correct diagnosis, proper management of cases.