Deepika and Alva: A Comparative study for the assessment of diagnostic efficacy and accuracy of various techniques in detection of malarial parasites

Background: Malaria is a serious disease caused by Plasmodium species and if left untreated, can be fatal. Four of the known species of Plasmodium commonly infect humans, P. falciparum, P. vivax, P. ovale, and P. malariae.

Due to the serious nature of P. falciparum infections, prompt and accurate diagnosis of the condition is essential for effective management. Keeping in mind the seriousness of the condition and the current availability of diagnostic facilities across India, we decided to compare the efficacy and accuracy of thick and thin peripheral blood smears [which is the gold standard for the diagnosis of malaria in endemic countries] with QBC (Quantitative Buffy Coat) by fluorescent microscopy and Antigen Card test for the detection of malarial parasites.

Aim: 1. To detect the diagnostic accuracy of four different tests in the diagnosis of Malaria (thick and thin peripheral blood smears, QBC and Ag Card test). 2. To evaluate the efficiency of individual tests. 3. Assessment on comparison of the various techniques in the detection of the malaria

Materials and Methods: The patients presenting symptoms suggestive of malaria were included. The total sample size was 250. The blood sample (containing EDTA) was first used to make peripheral blood smears and do Ag card test. The rest of the blood sample was used for QBC.

Results: The sensitivity, specificity and accuracy of MPQBC method was the highest among other tests in the present study and it was statistically significant (p<0.05).

Conclusions: MPQBC (Malarial Parasite Quantitative Buffy Coat) method is superior to other tests. It has good sensitivity and specificity and it can detect low level of parasitemia. It is the most accurate and efficient method for the detection of malarial parasites.

According to the latest World Malaria report, released on 30 November 2020, there were 229 million cases of malaria in 2019 compared to 228 million cases in 2018. The estimated number of malaria deaths stood at 409000 in 2019, compared with 411000 deaths in 2018.1, 2, 3 Malaria is a serious disease caused by the protozoal parasite Plasmodium species, and if left untreated, can be fatal.1 Due to the serious nature of P. falciparum infections, prompt and accurate diagnosis of the condition is essential for effective management. 4

Keeping in mind the seriousness of the condition and the current availability of diagnostic facilities across India, we decided to compare the efficacy and accuracy of thick and thin peripheral blood smears [which is the gold standard for the diagnosis of malaria in endemic countries] with QBC (Quantitative Buffy Coat) by fluorescent microscopy and Antigen Card test for the detection of malarial parasites.

Patients of all ages with clinical signs and symptoms of Malaria.

These were prepared as per the standard method described elsewhere. The slides were examined by an experienced Pathologist/Microbiologist. Thick smears were reported negative after examination of 20-30 oil immersion fields when no parasites were observed; a thin smear was given negative when no parasites were observed in 20 oil immersion fields. 5, 6

Specially designed microhematocrit tubes coated with acridine orange were used. Approximately, 55-60 μl of blood was loaded into the tubes and stopper and float were applied at either ends; the tubes were centrifuged at 12000 RPM in a pre-programmed centrifuge as per the manufacturer’s instructions. . 5, 7 The interpretation was done using a standard microscope fitted with Para Lens ultraviolet microscope adaptor and a ×60 objective connected to fiber optic ultraviolet light module. The parasites were seen in buffy coat layer and the interface between RBC and WBC regions. Reports were given as +, ++, +++, ++++ for 0-1, 1-10, 10-100 and more than 100 parasites/QBC fields respectively.5, 3, 8

Whole blood was collected in a clean container (containing EDTA). Commercially available antigen detection kit used. 4ul whole blood was taken using the sample dropper. The blood sample was added onto the sample pad in the sample well.3 drops of the assay buffer was added in the buffer well. The results were read after 20 minutes.4, 9 Interpretation-Positive-Appearance of the three purplish pink colored lines one each in Pf. Region (F), Pan region (P) and Control region (C) indicated that the sample is reactive for P. falciparum and/or P.vivax/P.malariae/P.ovale only. Negative- Appearance of only one purplish pink coloured line at control ‘C’ region Invalid- if no line appeared.4, 5 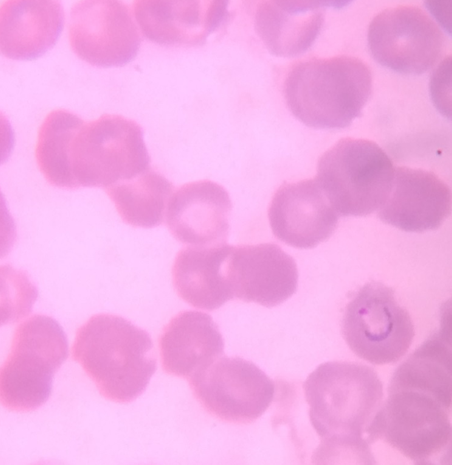 Schizont of P.vivax in a thin blood smear. 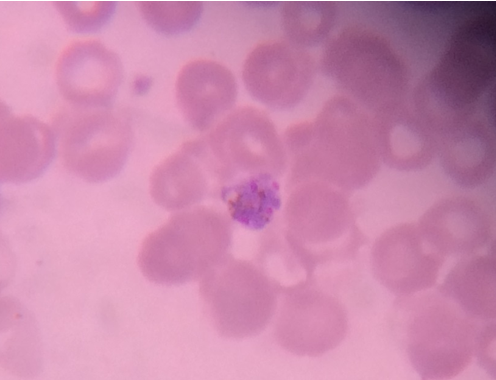 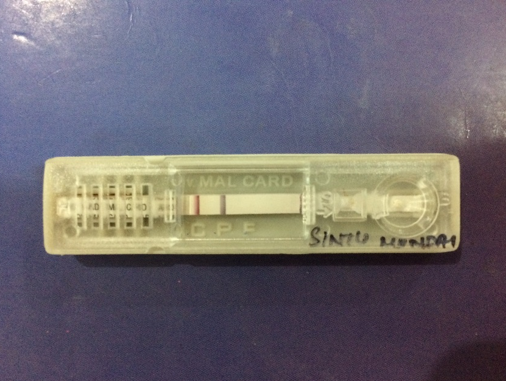 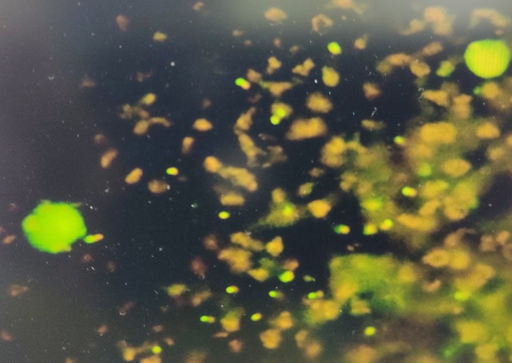 Rate of detection of malaria by different methods

Comparison of Rate of positivity for different methods in various studies.

Sensitivity and specificity of Thin PS, Ag Card Test and MPQBC when compared with Thick PS.

In many parts of the world, physicians often go with presumptive malaria diagnosis based on clinical symptoms and signs. Various clinical algorithms have been suggested and the best of them predict only up to 50% of true malaria cases. This method has poor specificity and positive predictive value. It does not allow differentiation of different species of malaria infection.10, 11, 12

In a study by Parija et al, 5 they found 82(19.95%) cases were positive by Thick PS examination method which was the highest compared to the other methods, followed by MPQBC which detected 66(16.06%) cases. Examination of Thin PS has the least rate of positivity of 45(10.94%); the results were slightly different from our study, where the rate of positivity was highest with MPQBC method.(Table 3)

In a study conducted by Parija et al 5 the sensitivity of Thin PS, Ag Card Test and MPQBC were 54.8%, 75% and 78.94% respectively. They found that sensitivity of MPQBC method was highest and Thin PS was the lowest which was similar to the results of our study. They found specificity of Thin PS and Ag Card Test to be 100% when compared to MPQBC method which was 98%. This result was different from our results where MPQBC method had the highest specificity i.e 97.7%.(Table 4)

In another study done by Panigrahi K,10 the sensitivity of Thin PS, Ag Card Test and MPQBC were 66.12%, 93% and 96.7% respectively. They found the sensitivity of MPQBC method to be highest which was similar to our study. However, in their study, the specificity of Thin PS was found to be the highest and lowest for MPQBC method which was different from our study. The dissimilarities were may due to very small number of samples in this group than in our study.(Table 4)

MPQBC was found to be superior to other tests. It is the most accurate and efficient method for the detection of malarial parasites. Its simple, rapid, reliable, quick and easily mastered method for diagnosis of malaria. It is of much use in laboratories which screen large number of samples and in endemic areas where parasite level is low. It can also be used in highly suspected cases of malaria where parasite could not be detected in peripheral blood film.

In situations where adequate laboratory back up is not available, antigen card test can be employed. However, Leishman stained thin blood smear still appears superior for species identification.

Authors are thankful to Departments of Paediatrics and Medicine of K.V.G Medical College, Sullia D.K for providing institutional support to carry out this study.

K Panigrahi A Comparative study of peripheral blood smear, QBC and antigen detectiontest in diagnosis of malaria, in a tertiary care hospitalIJRRMS201333358