Bhadani, Bhadani, and Swati: Hydatidiform mole presented as vaginal polyp: An uncommon and unusual case report with review of literature

Hydatidiform mole presented as vaginal polyp: An uncommon and unusual case report with review of literature

A 46 year old multiparous female belonging to lower socioeconomic strata came to the Gynaecology outpatient department with complaint of something bulging out from vagina since last 4 months, which used to bleed on touch. Local examination revealed presence of a polypoidal structure in vagina. The patient underwent polypectomy surgery, which was uneventful. Excised polyp was sent for histopathological examination. Microscopic examination showed presence of chorionic villi having retained RBC’s with cistern formation in few along with polar trophoblastic proliferation. Patient gave history of expulsion of grape like structure at home two years back without follow up, when she was asked a leading question after microscopic examination. The case was reported as metastatic hydatidiform mole after consultation with the concerned clinician with advice of follow up and see the status of other organs.

The reported unusual case highlights the importance of dialogue between clinician and pathologist, relevant history taking for a correct diagnosis, appropriate treatment approach, and follow up of the patient for prognostication. This unusual presentation of metastatic hydatidiform mole is sparsely reported in the English literature.

Gestational trophoblastic disease (GTD) can be challenging for the pathologic evaluation with a focus on pathologic challenges and the clinician also without proper history taking. Classification of GTD based on histomorphological findings correlated with the clinical details and specific marker, their importance in normal as well as abnormal physiological and pathological conditions.1, 2, 3 The reported unusual case presentation with review, focuses on the challenges and familiarity with the metastatic hydatidiform mole, which may be seen first-hand by the pathologist without clinical suspicion. We presumed that the case might be the recurrence of a ignored hydatidiform mole two years ago and now presented as metastatic hydatidiform mole which require chemotherapy for the good prognosis.4, 5, 6

A 46 year old multiparous female of lower socioeconomic status presented to gynaecology outpatient department with the complaint of something coming out from vagina, which bleeded on touch. History of amenorrhea was not given. On general examination, all parameters were within normal limit. Per vaginal examination revealed 3 cm sessile polyp on vagina. Excision of polyp was performed without any complication and sent for histopathological examination (HPE) with clinical diagnosis of vaginal polyp. Patient was discharged next day after the surgery with the advice of follow-up.

Grossly, polypoidal structure was received without stalk and measured around 2.5 cm. Cut section was glistening white. Whole polyp was processed for microscopic examination.

Microscopic examination, stands a diagnostic dilemma as chorionic villi of varying sizes were seen without any polypoidal lining epithelium. The enlarged villi had scalloped borders showing hydropic changes with presence of central cistern, while fair number of villi were small in size. Few of them showed polar trophoblastic proliferation. Many of the villi showed nucleated RBCs. At places embryonal tissue was also identified. (Figure 1) It is a great and important decision to make the specific diagnosis considering the site of lesion.

On the basis of the above histomorphological features along with the consultation of operating clinician a diagnosis of metastatic partial hydatidiform mole was offered with emphasis on follow up of the patient, her serum HCG level and scanning of other organs.

Post-surgical visit of the patient confirmed the above mentioned diagnosis. She also had history of expulsion of grape like structure 2 years back once asked a leading question, which was ignored by her and no medical consultation was taken for the same.

The staging featuring a thoraco-abdominopelvic CT scan, chest radiography, ultrasound abdomen and pelvis was normal on follow up visit. Her serum beta-HCG level was slightly increased (645 IU/ml), after 10 days of surgery without any symptoms. Considering the diagnosis of metastatic hydatidiform mole, clinician advised her to get admitted for starting methotrexate-based agent chemotherapy, which she denied and lost to follow up. 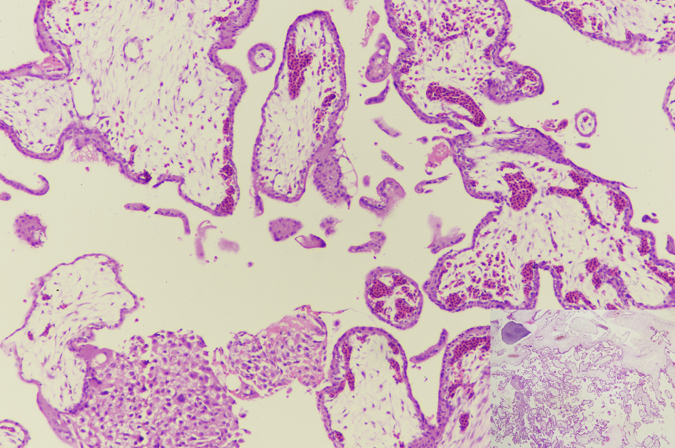 Overall incidence of invasive mole is 1/15000 pregnancies. Local invasion of uterus is reported in about 15% of cases.8

The risk of developing an invasive mole in women with past history of complete mole removal increases if prolonged time interval is present between diagnosis and treatment and if age is more than 40 years.7, 8 Both the factors were present in this case.

Sometimes after removal of a complete hydatidiform mole, the tumor spreads (metastasizes) to other parts of the body, most often the lungs. This occurs in about 4% of the cases. Due to ease of entry of molar tissue into large venous lake present in myometrium and pelvis in pregnancy or trophoblastic disease, metastasis of invasive mole is seen commonly in lungs. Vagina, cervix and broad ligament can also be involved.9, 10

Zhang et al’s2 in 2015 reported, a case of placental site trophoblastic tumor (PSTT) presented with metastasis to vagina, probably a recurrence as metastasis after 3 years of initial diagnosis.

In this reported case, which is presented as a vaginal polyp, looked benign lesion to the clinicians. After microscopic examination suspicion was raised, that this is not a simple benign polyp but definitely a gestational trophoblastic neoplasm. After which patient was enquired on follow up and she declared after leading question, that she passed grape like structure per vaginum two years back after the history of 2 months of amenorrhea. Combining the history given by the patient and the histomorphological feature, diagnosis of metastatic hydatidiform mole was confirmed.

Combination chemotherapy should be given in invasive mole, as it is highly sensitive to it. It is continued until the patient achieves 3 consecutive normal HCG levels.13, 14 As normal HCG levels are attained, 3 additional courses of chemotherapy are administered to reduce the risk of relapse. Same was advised by the clinician to the patient, the patient denied treatment and didn’t come for follow up.

The indexed case shares the relevance of the correct clinical details including the importance of leading questions specially in case of unexpected histomorphological details for the awareness of unusual diagnosis at the unusual site, it’s importance for appropriate therapy and follow up, which is directly correlated with the prognosis.