Akhtar, Meraj, Talat, and Haiyat: Lymphangioma of the dorso-lateral tongue in an adult male: A rare case report

Lymphangioma of the dorso-lateral tongue in an adult male: A rare case report

Lymphangioma is a relatively uncommon benign tumour occurring due to malformation of the lymphatic vessels. Lymphangioma in adults is a rare occurrence. Intraoral lymphangiomas occur most frequently on the dorsal tongue and rarely on the palate, buccal mucosa, gingiva and lips. Clinically, lymphangiomas of the oral cavity usually have a plaque formed of small thin-walled vesicles and similar in surface to frog eggs. We present a case of lymphangioma of the tongue in a 34-year-old male who presented with complaints of painless swelling in his tongue with difficulty in speaking for the last 25 days. CT scan revealed a lobulated sharp-contoured soft tissue communicating with the superficial planes with minimum vascularity in colour doppler studies. En masse excision of the firm, solid erythematous mass was performed which microscopically showed multiple dilated endothelial lined vessels filled with a proteinaceous fluid and lymphocytes. A diagnosis of lymphangioma of the tongue was given.

Lymphangioma, described by Redenbacher in 1828, is a relatively uncommon benign tumour occurring due to malformation of the lymphatic vessels.1, 2 These tumours comprise 4% of all the vascular tumours and 25% of all benign vascular tumours in children. No racial predominance or sexual predilection has been reported in them. 3 They are also called lymphatic hamartomas and are usually detected at birth (50%) or in early childhood, and the majority (90%) of congenital cases develop before two years of age.4 Lymphangioma in adults is a rare occurrence.4

The head and neck region is frequently involved (50%–75%) in lymphangiomas; however, the oral cavity is rarely affected. Other sites include shoulder, armpit, abdomen, neck, pharynx, eyelids, and conjunctiva.5 Intraoral lymphangiomas occur most frequently on the dorsal tongue and rarely on the palate, buccal mucosa, gingiva and lips. 6 Tongue lymphangiomas represent 6% of these tumours in the body.7, 8 The most common site for intraoral lymphangioma leading to macroglossia is the anterior two-thirds of the dorsal surface of the tongue.9

A 34-year-old male reported to the otolaryngology Clinics of Jawaharlal Nehru Medical College Hospital with chief complaint of a painless swelling on his tongue for 25 days. The patient also had difficulty in speaking and accidental biting of tongue while eating. Intraoral examination revealed a solitary inflamed fleshy swellingon the left dorsolateral part of the tongue, approximately 3x4 cm in size, with numerous tiny papillary projections. On palpation, the lesion was soft and tender with adherence to the superficial and deep layers. There was no bleeding on palpation, as well as no evidence of any lymph nodes. No other intraoral lesions were appreciated. The cranial nerve examination was within normal limits. The patients’ vital signs were stable.

En masse excision was done using local anesthesia with a margin of 1 cm from the lesion. The excision mass was firm, solid erythematous and measured 3.5 x 4.2 cm. Histopathological examination of the lesion showed multiple dilated endothelial lined vessels just adjacent to squamous epithelium. These vessels contained proteinaceous fluid and lymphocytes (Figure 1, Figure 2). A diagnosis of lymphangioma of the tongues was given. Our patient is doing well after 12 months of follow up period. 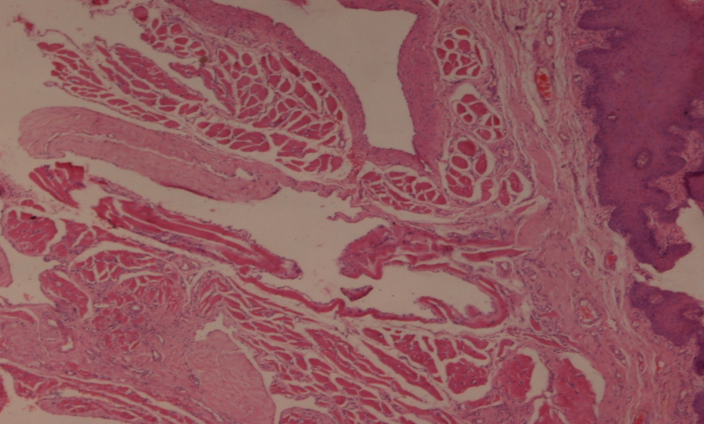 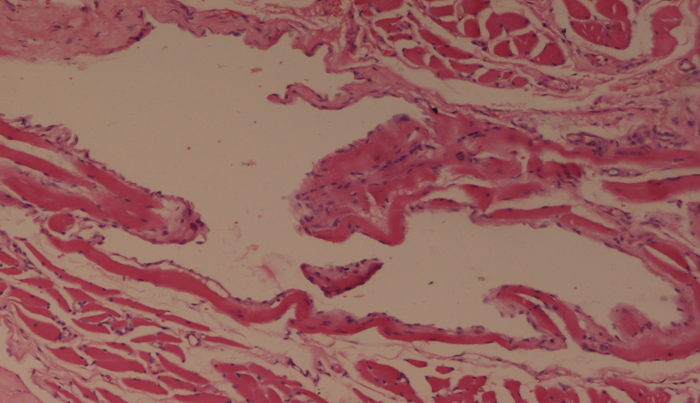 The etiology of lymphangioma is not fully understood, and two major theories are proposed. The first theory explains that the lymphatic channels develop from 5 primitive sacs arising from the venous system and endothelial out-pouching from the jugular sac forms the lymphatic system in the head and neck region. The second theory proposes that the mesenchymal clefts in the venous plexus reticulum extend towards the center of the jugular sac and form the lymphatic system. Congenital obstruction or sequestration of these enlarged primitive lymphatics leads to lymphangioma.9 On the other hand, the etiology of lymphangioma acquired in adulthood is different and includes trauma, inflammation, and lymphatic obstruction.5

Lymphangioma is typically diagnosed clinically. The extension and size of lesion affect the clinical appearance of lymphangioma. Superficial lesions are pink or yellowish in color and consist of elevated nodules. The deeper lesions are soft and diffuse masses with mild variation in color.6 Clinically, lymphangiomas of the oral cavity present as pinkish small thin-walled vesicular lesions. The vesicles contain both clear fluid (lymph) and blood content suggesting the co-existence of lymphatic and vascular anomalies.10

Macroglossia, with an irregular surface displaying gray and pink projections, is a key feature of lymphangioma of the tongue. In children, lymphangioma is a common cause of macroglossia and is associated with difficulty in swallowing and mastication, speech disturbances, airway obstruction, mandibular prognathism, bleeding, and other deformities of maxillofacial complex.9 Majority of cases of macroglossia in children due to intraoral lymphangioma are located on the anterior two-thirds of the dorsal tongue.11

Due to their characteristic histology and classic clinical appearance, lymphangiomas of the tongue are easy to diagnose. The histologic features are characteristic and the clinical appearance often classic. Generally, any “bump of the tongue” is included under the clinical differentials of lymphangiomas. Hematoxylin and eosin stained sections are best for differentiating them from other differentials. In the present case, the dorsolateralsite may suggest entities such as granular cell tumor, lingual thyroid, and mesenchymal tumors, but are not limited to these. Vascular lesions like hemangiomas, venous malformations and arteriovenous malformations are the main mesenchymal tumors to be considered.3

Early recognition and appropriate treatment is necessary to achieve optimal therapeutic results and avoid complications.12, 13 Lymphangioma is managed on the basis of their type, size, anatomical structures involved and infiltration to the adjacent tissues.13, 14 The main purpose of therapy is to relieve pain, edema, lymph, and blood leak, as well as super infections. Aesthetic improvement is also important for patients psychological well-being. Surgical excision is the treatment of choice, but it causes scar formation and is not feasible in all cases. Cryotherapy, radiation therapy, steroid administration, sclerotherapy, electro-cautery, embolization, ligation, laser surgery, and radiofrequency tissue ablation are the other modalities used in such cases. It is essential to include a surrounding border of normal tissue without damaging vital structures for minimal recurrence and successful outcome.15, 16

WHO Classification of Head and Neck Tumours. 4th Edition. International Agency for Research on Cancer Lyon2017