Sharma and Kaler: SAT B2 a novel diagnostic adjunct in a rare presentation of extra skeletal osteosarcoma of scrotum

SATB2 is a nuclear protein that plays a critical role in osteoblast lineage commitment. Diagnosing extra skeletal osteosarcomas at rare sites can be quite challenging as it might mimic hyalinized stroma. The utility of SATB2 expression in osteosarcomas and other bone and soft tissue tumours is an useful adjunct to histopathology in diagnosing these rare lesions. A 69 year old male, presented with scrotal swelling since 8 months. He underwent left sided orchidectomy because of the clinical suspicion of malignancy. Macroscopy revealed a solid mass in the para testicular tissue with no involvement of the testicular tissue. Cut surface is whitish, firm and homogenous. Microscopy showed malignant soft tissue tumor with areas showing osteoid differentiation and SAT B2 helped in confirmation of diagnosis by highlighting the osteoblastic nature of cells. Hence a diagnosis of Primary extra skeletal paratesticular osteosarcomas was made.

Special AT-rich sequence binding protein (SAT B2) has been described as a novel marker for osteoblastic differentiation in benign and malignant soft tissue tumors.1 Extra skeletal osteosarcoma is a rare malignancy, representing approximately 2 to 4% of the osteosarcomas and less than 1% of the soft-tissue sarcomas.2

The SAT B2 expression helps to distinguish osteoblastic differentiation from their mimickers.1 It proved to be a valuable reliable marker in differentiating extraskeletal osteosarcomas from other paratesticular sarcomas arising in the scrotum wall.

A 69 year old male, non alcoholic and non smoker presented with a painless palpable mass in the left side of the scrotum, gradually increasing in size over a period of 8 months. There was no past history of urogenital infection, trauma or surgery. The patient is hypertensive with no other medical history. System examination was unremarkable. Tumour markers were also within normal limits (β-hCG < 0.1 mIU/ml, α-fetoprotein = 2.0 ng/ml and LDH = 143 IU/l).

A scrotal examination was performed which revealed a hard, non-tender mass of the left scrotum. Mildly palpable inguinal lymph nodes were detected. Extensive clinical and radiological work up did not reveal any significant pathology. Ultrasound showed a heterogenous mass with areas of necrosis. A clinical suspicious of malignancy was made and the patient underwent left inguinal radical orchiodectomy. The post operative course of the patient is uneventful and the patient is disease free after 3 months.

Microscopy of the scrotal mass revealed a neoplasm composed of neoplastic spindle cells arranged in nests and diffuse sheets in a myxoid stroma with focal areas of acellular hyalinization ( ?Osteoid). The neoplastic cells shows pleomorphism, are hyperchromatic nuclei and scanty cytoplasm. Mitosis of 1-2/HPF noted. Infiltration of the tumor into the testis, epididymis and spermatic cord was not observed. All the margins were clear of the tumor cells and lymphovascular invasion was not found. Immunohistochemistry revealed a strong nuclear positivity for SAT B2. Other IHC markers like Smooth muscle muscle actin (SMA), CD34, cytokeratin, desmin, inhibin and S-100 were negative. A diagnosis of primary paratesticular extraskeletal osteosarcomas was made based on morphology, immunohistochemistry and clinical presentation. 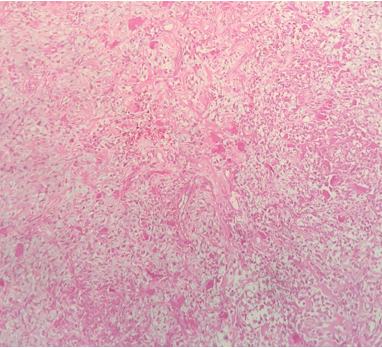 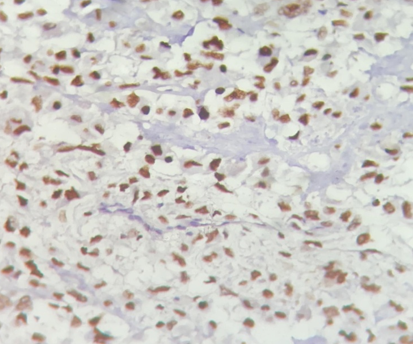 SATB2 is part of the family of matrix attachment region binding transcription factors and has a development role in cranio facial, neural and osteoblastic differentiation. It is a nuclear protein that plays a critical role in osteoblast differentiation via interactions with transcription regulator Runx2 and micro RNA network. 5 SAT B2 has also been shown to be highly expressed in tumors with osteoblastic differentiation, including osteosarcomas and other benign bone tumors. 6 Reports suggested that SAT B2 immunohistochemistry is sensitive to decalcification and ideally should be performed on the biopsy. 7 The present case has a distinct neoplastic polygonal to spindloid cells with hyperchromatic nucleus and prominent nucleoli with filigree/lace-like disorganized pink eosinophilic bony matrix in between the tumor cells. SAT B2 highlighted the osteoblastic nature of cells in the sarcoma.

Extraskeletal osteosarcoma is a malignant mesenchymal neoplasm that produces osteoid, bone or chondroid material. By definition, they are located in the soft tissues without primary bone or periosteal involvement. 8 Compared with osteosarcoma of the bone, extraskeletal osteosarcoma is rare, accounting for 1-2% of all soft tissue sarcomas.9 The most common location of these tumours is the lower extremity, especially the thigh, followed by the upper extremity and the retroperitoneum. 10. Primary Extraskeletal osteosarcoma arising from paratesticular tissue is extremely rare and this is the fourth reported case in the history in a 69 years male. The patient had no previous history or current evidence of primary bone tumor. He presented as a gradually increasing painless firm scrotal mass since 6 months. Lidang et al mentioned that the tumor tends to present in an older age group, and has a higher recurrence rate and poorer survival.11

The common differential diagnosis include paratesticular sarcomas of mesenchymal origin, majority are benign (70%) and only about 30% are malignant which manifest as a variety of histological types like leiomyosarcoma, liposarcomas, fibrosarcomas, embryonal sarcomas and rhabdomyosarcomas. 12 Paratesticular sarcomas are uncommon and accounts for 2.0 % of all soft tissue sarcomas.3 Immunohistochemical markers have a significant role in narrowing the diagnosis. The present case showed negativity towards like Pan CK, Myo D1, MDM2, inhibin, CD34 and S-100 protein and a strong cytoplasmic positivity towards vimentin. SAT B2 proved to be an useful adjunct in confirming the osteoblastic differentiation in the paratesticular sarcoma.

Paratesticular sarcomas encompassing term to describe the tumours arising within the scrotum but not of testicular origin and includes the epididymis, spermatic cord, tunica vaginalis and various supporting structures. 13 Although the exact site of tumor in the paratesticular region is difficult to localize with certainty, it is thought that paratesticular sarcomas are arising from the spermatic cord in 90% cases. 2 In the present case, the tumor was located in the scrotum; the exact location couldn’t be determined as spermatic cord, testicular tissue and epididymis were completely normal. Hence, probably theory includes the metaplasia of the supporting stroma in paratesticular structures or neoplastic transformation of preexisting embryonic remnants in the scrotum wall as the probable origin of the osteosarcoma in this case.

Anwar et al quoted that extra skeletal osteosacrcomas appears to require a more aggressive treatment strategy compared to testicular osteosarcomas.16 The prognosis of paratesticular osteosarcomas is variable based on the reported cases. Of the 3 cases reported, one patient in the literature succumbled to the disseminated disease; the second case was disease free after 6 months of treatment and the third one was lost to follow up. The present case is disease free after 3 months. However, the prognosis of extra skeletal osteosarcomas is unclear due to the short follow up period and may be more case studies are required to form a further opinion.

I Machado S Navarro P Picci A Llombart-Bosch The utility of SATB2 immunohistochemical expression in distinguishing between osteosarcomas and their malignant bone tumor mimickers, such as Ewing sarcomas and chondrosarcomasPathol - Res Pract20162129811610.1016/j.prp.2016.06.012

K B Berg D F Schaeffer SAT B2 as an Immunohistochemical Marker for Colorectal Adenocarcinoma. A concise review of benefits and pitfallsArch Pathol Laboratory Med201710142833

P Russo Urologic sarcoma in adults. Memorial Sloan-Kettering Cancer Center experience based on a prospective database between 1982 and 1989Urol Clin North Am 2008185818

A Al-Masri M Al-Shraim A Al-Samen R Chetty A Evans Primary paratesticular osteosarcoma: case report and a review of the literatureSci World J2007308504