Conclusion: It is the need of the hour to adopt adequate, effective corrective strategies to curb the pre-analytical errors in the laboratory, thereby ensuring safety and satisfaction to the patients and clinicians, which would pave the way for an efficient heath care system.

The clinical laboratory plays an increasingly pivotal role in the patient-care services. Physicians depend on accurate laboratory test results for proper disease diagnosis and for establishment of exact therapy.1 Clinical laboratory errors can reflect on increased healthcare costs and decreased patient satisfaction. Laboratory errors can happen at any of the three stages, studies show that the pre-analytical phase accounts for 46% to 68.2%.2 However, with recent improvements in pre-analytical automation, the pre-analytical phase is still the most error-prone phase in a laboratory.2 Thus, this study is done to identify the different preanalytical errors in the central laboratory and corrective strategies taken to overcome them.

Current study was a descriptive one and it was carried out in the Central Laboratory, Mahatma Gandhi Medical College and Research Institute, Pondicherry. Duration of study was one year from September 2018 to August 2019. The study included all the samples collected from the Central laboratory, Mahatma Gandhi Medical College and Research Institute, which included departments like Pathology, Biochemistry and Microbiology. The samples were received along with the patients request form which included the necessary and mandatory patients details. The errors in the preanalytical phase were noted as per the ISO 15189: 2012 in a separate register and risk on the patient safety was assessed based on Failure model and effects analysis (FMEA) and categorised into various grades of severity like highly hazardous, hazardous, very high, high, moderate and low.3 Necessary corrective measures were implemented and pre-analytical errors were reassessed. A total of 500 samples were studied in this study period. Amongst 500 samples received, preanalytical errors were detected in 263 samples. The study and data accumulation were carried out with approval from the Institutional Human Ethics Committee. Z-test was applied to compare the results pre and post intervention of corrective measures. 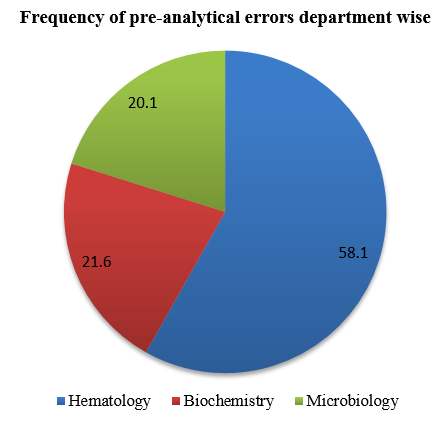 Percentage of pre-analytical errors and nature of sample

Although, there are many articles on pre-analytical errors and their corrective actions in a laboratory, there are very few articles with risk assessment of safety on patient and implementation of FMEA( Failure model and effects analysis).So, in order to bring such pre-analytical errors under control, regular training programmes for the laboratory technicians and diagnosticians should be implemented as a hospital policy, followed by assessment of the knowledge and skills in the quality management system of laboratory.

Alhough there are lots of development in analytical phase of testing in clinical labs, many errors still occur and they will continue to occur in pre-analytical phase.9 Such pre-enalytical errors can be overcome by better coordination between labs and wards, continuing medical education programmes of laboratory staff, computerization of the labs and competency check of staff. 10

Julie A. Hammerling A Review of Medical Errors in Laboratory Diagnostics and Where We Are Today: Table 1Lab Med201243241410.1309/lm6er9wjr1ihqauy