Introduction: Upper gastrointestinal tract disorders are one of the commonly seen entities in the clinical practice. Gastric carcinoma is the second most common cancer while oesophageal carcinoma is the sixth leading cause of the death worldwide. Histopathological study has been done to make a specific diagnosis or to follow the evolution of particular disease.

Materials and Methods: A retrospective study was conducted on 1,800 upper gastrointestinal biopsies performed at our hospital from May 2015 to April 2018. The biopsies were formalin fixed, and embedded in paraffin wax, sections were taken, stained with Haematoxylin & Eosin and examined

Gastrointestinal tract is one of the commonest site for various lesions with high degree of mortality and morbidity. Further endoscopic biopsy is commonly performed procedure for variety of benign and malignant lesions.1 Gastric carcinoma is the second most common carcinoma and is the leading cause of death in the current senario.2

As per Indian National Cancer Register, oesophageal and gastric cancer are the commonest cancers found in men. 3 Histopathological identification of gastrointestinal biopsies at the earlier stages allows an early intervention and prompt treatment of the disease. 4

Introduction of endoscopes in 1960 has greatly improved the diagnostic facility. Tissue specimen can be taken from the lesion under direct vision using endoscopic biopsy forceps. 1 Upper Gastrointestinal endoscopy is the most sensitive and specific method for the detection of various neoplasms specially esophageal, gastric and duodenal neoplasm.5

Endoscopic biopsies detects lesion at an early stages and helps in prevention in progress of various lesions to carcinoma. 6

It is a retrospective study conducted in the department of pathology, VIMS&RC, Bangalore on 1,800 upper gastrointestinal biopsies, performed at Vydehi hospital during a 36 months period from May 2015 to April 2018, out of which 486 (27%) cases were found to be neoplastic and were reviewed retrospectively.

Biopsies slides stained with H&E and Giemsa were retrieved from archival material and were studied in detail with respect to nature of the lesion, age distribution, gender distribution, and histopathological features.

The present study includes 486 (27%) cases of upper gastrointestinal neoplastic biopsies between the period May 2015 to April 2018.

The following results were observed.

Frequency and Percentage of Neoplastic Lesions 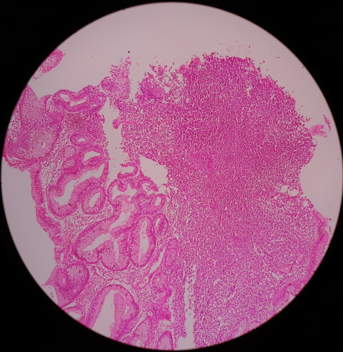 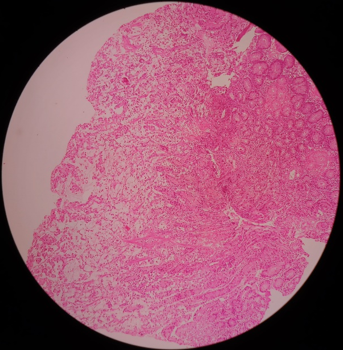 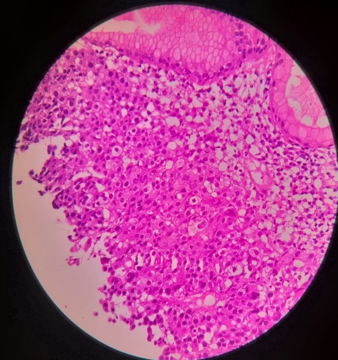 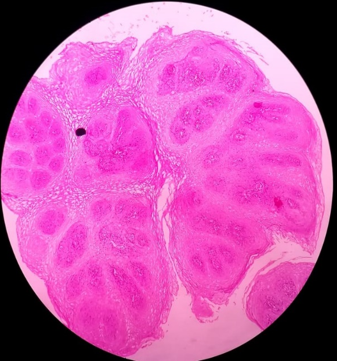 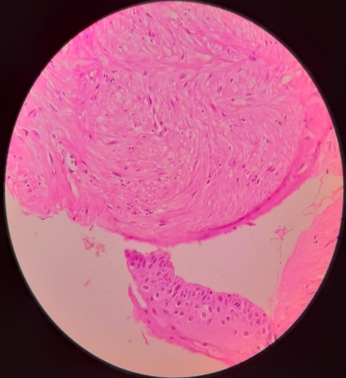 Out of 1,800 upper gastrointestinal endoscopic biopsy samples, that were studied during the period of three years, 486 (27%) were neoplastic. There were 279 males and 207 females making the male to female ratio of 1.4:1. The highest incidence was seen between 4th to 6th decade, while lowest incidence was seen in patients after 8th decade of life. The commonest site for gastric biopsy was pylorus followed by body, cardia and fundus.

In the present study, most common site for gastro intestinal biopsy is stomach followed by esophagus and duodenum. Endoscopic biopsy provides important clues that helps in diagnosis of various lesions.6 Clinical and endoscopic information is the fundamental part of adequacy and interpretation of biopsy is strongly affected by these factors.6Out of 486 patients, with neoplastic endoscopic biopsies, males were predominantly affected i.e. 58% while rest 42% were females. This was also proved by another study done by Shennak MM et al7 over a period of 10 years.

The male: female ratio was 1.80:1. The ratio is suggestive of male predominance, mostly because of increased exposure of males to more risk factors, same established by the study done by JC Paymaster et al.8In the present study, the highest incidence of upper gastrointestinal endoscopic lesions are seen between 41-60 years which comprises of 48.55% of total number of biopsies, similar to study conducted by Qureshi et al9 with 72 endoscopic biopsy samples over a period of 2 years. The oldest patient was 89 years old and the youngest was 9 years old. The age related difference could be due to the variations in risk factors among the different age groups. The incidence of neoplastic lesions was common in 5th decade with male predominance. Among the neoplastic lesion, stomach was most common site followed by esophagus.

Smoking, alcohol, dietary factors and social habits have been prosposed as risk factor for gastric cancer.10 The incidence of gastic cancer is higher as compared to esophageal cancer. The highest incidence of neoplastic lesion in the present study was seen between 4th to 6th decade. This observation was similar to study carried out by Qureshi et al9 on 13,881 endoscopic biopsies over a period of 10 years.

Squamous dysplasia is a precursor lesion to squamous cell carcinoma. About 30% of dysplastic cases progress to carcinoma.11 Obesity, alcohol consumption, smoking and reflux are the risk factors for adenocarcinoma esophagus, and is having bad prognosis and prognosis become worst in cases of signet ring and mucinous variant of adenocarcinoma.12

In our study, commonest site for endoscopic biopsies was stomach, with a total number of 486(27%) neoplastic cases. The most commonly affected age group is between 40-60 years. Well differentiated Adeno carcinoma was a common malignancy followed by poorly differentiated Adenocarcinoma.

Upper gastrointestinal endoscopy is safe, simple, cost-effective, well tolerated and relatively less invasive procedure which permits exact diagnosis and helps in prompt treatment. Although histopathology is the gold standard, but biopsy provides a great opportunity to establish a definite/conclusive diagnosis and thus aiding in early treatment and management.

There were no cases of duodenal malignancy in our study.