Aim: To assess the utility of FNAC in diagnosis of head and neck lymph node lesions and to establish the diagnostic accuracy of cytology by comparing with the histopathological diagnosis, wherever possible.

Materials and Methods: A 6 months retrospective study was done from March 2020 to August 2020 at Khaja Bandanawaz institute of medical sciences on 50 patients presenting with head and neck lymph node enlargement.

Conclusion: FNAC has been found to be a satisfactory tool in the diagnosis of tubercular and malignant lymphadenopathy in our study. The lucidity and rapidity of the procedure makes it most appropriate for use on outpatient basis even in peripheral hospitals and dispensaries.

The head and neck area is a complex anatomical structure which includes various non-neoplastic and neoplastic lesions of lymph node, salivary gland, thyroid gland and soft tissue.1 Lymphadenopathy is one of the commonest presenting symptoms of all age groups attending Out Patient Department. The etiology can differ from simple inflammatory reactive lesion to tubercular granulomatous lesion to a malignant condition. 2 Fine needle aspiration cytology (FNAC) is a quick, simple and cost effective method to sample superficial lesions found in head and neck. FNAC is of particular relevance because of easy accessibility of the target site, excellent patient compliance, minimally invasive nature of the procedure and helping to avoid surgery in non-neoplastic lesions, inflammatory conditions and also some tumors.

Martin introduced this technique for the evaluation of head and neck lesions in 1930 and the procedure has since then become increasingly popular and is being frequently used in the evaluation of swellings of this region. 3 Fine needle aspiration cytology of head and neck lymph nodes proved useful in separating inflammatory lesions, which do not require surgical excision from cystic and neoplastic lesions with good certainty. It has contributed great deal to transform cytology from a primary screening tool to powerful diagnostic techniques. 4 However, there are also studies reporting opposing views. 5, 6, 7

The present study was undertaken to assess the utility of FNAC in diagnosis of head and neck lymph node lesions and to establish the diagnostic accuracy of cytology by comparing with the histopathological diagnosis, wherever possible.

The present study was undertaken in the Department of Pathology, Khaja Bandanawaz Institute of Medical Sciences from March 2020 to August 2020. Those patients who presented with superficially palpable head and neck lesions in Medicine, Surgical and Dental OPD and underwent FNAC were considered as the study group.

This retrospective observational study included 50 cases of FNACs done on head and neck lymph node swellings performed as outdoor procedure over a period of 6 months. The palpable swelling was fixed with one hand and with all aseptic precautions. FNAC was carried out using 10ml disposable syringe with 23- 25 gauze needle attached. Smears were prepared and routinely stained with Haemotoxylin and Eosin (H and E) and Field stain. Special stains like Ziehl Neelsen (ZN) stain was used wherever required. The surgical specimen were fixed in 10% neutral formalin and subjected to gross examination, processing, paraffin embedding, section cutting, staining by H&E and mounting by DPX. The cytomorphological features of various diseases were studied. FNAC and HPE of few lesions were correlated.

A total of 50 patients underwent FNAC of the head and neck lymph nodes during the study period. There were 26 (52%) males and 24 (48%) females (M:F ratio of 1.08:1). The age and sex-wise distribution of the 50 patients in this study is shown in Table 1. The age range of the patients in this study was between 4 years to 75 years. Of the total 50 patients studied, maximum numbers of patients were from third decade, followed by patients from second decade of life.

Age and sex distribution of patients for lymph node FNAC

Benign lymphadenopathy was the most common presentation of lymphadenopathy of the head and neck region amounting to 68% of all cases. Among benign lesions, Granulomatous/ tuberculous lymphadenitis was the most common findings of enlarged lymph nodes in the head and neck region amounting to 34%, followed by non-specific reactive lymphadenitis amounting to 28%. Of the 32% malignant lesions, 18% were metastatic carcinoma and 10% were Non-Hodgkin’s Lymphoma and 4% was diagnosed as Hodgkin’s lymphoma.(Table 3) 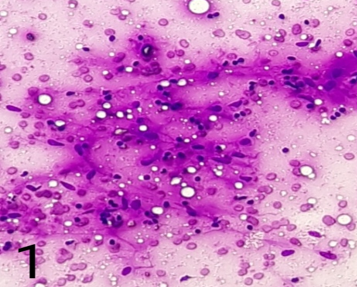 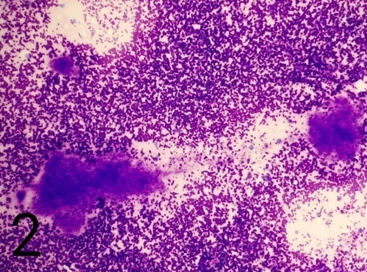 Non Hodgkin's Lymphoma(5 cases) showed monomorphous population of lymphocytes with few showing bimodal population (Figure 3) and these were later confirmed by histopathology as non Hodgkin’s lymphoma and were referred to higher centers for further evaluation.

Hodgkin's lymphoma (2 cases) showed polymorphous population of lymphoid cells, mixed inflammatory cells (neutrophils, eosinophils) in the background of RS cells. One case was of mixed cellularity, (Figure 4, Figure 5) another case was of syncytial variant of nodular sclerosis which was confirmed further by histopathology (Figure 6) and IHC - CD 30 +, Pax5 + (Figure 7A,B). 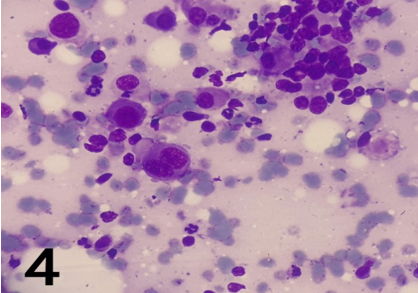 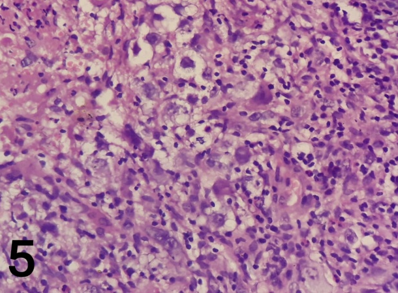 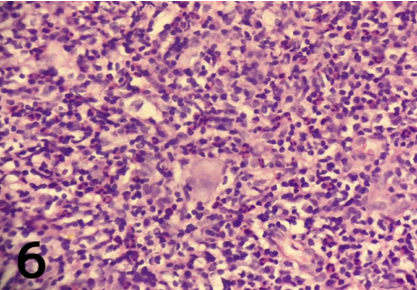 Out of 9 cases of metastasis, 8 were diagnosed as metastatic Squamous Cell Carcinoma (Figure 8) based on findings of pleomorphic squamous cells with keratinization in the cytoplasm and 1 case of metastatic adenocarcinoma (presence of tumour cells forming glands). The primary of all these cases were later identified and correlated with FNAC findings. 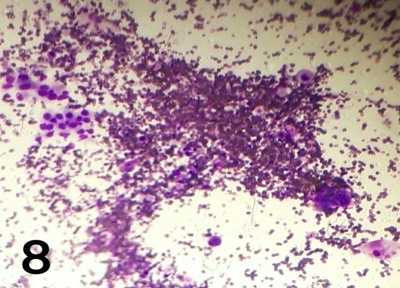 The accuracy of FNAC Diagnoses depends on several factors along with sampling method, adequacy of sample, experience of aspirator and expertise of cytopathologist. The false positive and false negative diagnosis points towards limitation and pitfalls in FNAC.5 FNAC is a valuable diagnostic test in the initial assessment of the patients presenting with a mass in the head and neck region or when a recurrence is suspected after previous treatment.

Various parameters like age distribution, sex predilection, sitewise distribution, nature of the lesion and histopathological correlation wherever possible were evaluated by us and the findings were compared with various national and international studies. Majority of patients were males with male to female ratio of 1.08:1 and the study included patients of all age group. Similar results of male preponderance were also reported by Gunvanti et al,8 Baji et al,9 Gemechu et al,10 Vidyadhara et al. 11

Of the total 50 patients studied, maximum number of patients were from the age group of second and third decade, followed by patients from age group of fourth and fifth decade. This was in concordance with the study of Rahman et al12 where age of the patients ranged from 10 months to 85 years and most of the patients presented in third decade followed by second and fourth decades of life. The peak incidence of lymph node swellings in this study group was between 21 to 30 years, which is similar to the findings of Shaan et al,13 Setal et al,14 Wahid et al15 and Gunvanti et al.8 Head and neck lesions can occur in any age group, though its incidence tends to be common in younger age group because of relatively high occurrence of infective conditions like tuberculosis and reactive lymphadenitis in our country.6

The most common diagnosis in our study was Tuberculous lymphadenitis comprising of 17 cases (34%). This observation is in accordance with the observation of other studies done by Sudershan Kapoor et al,4 Shaan et al, 13 Setal et al,14 Gunvanti et al,8 Mui S et al,16 Mobley et al17 and Alpesh et al 18 and the second most common lesion in our study was Reactive lymphadenitis which is similar to the study done by Shaikh et al.19

In present study out of 16 malignant lesions (32%), most cases were of metastatic carcinoma(18%) which is similar to the result from Sudershan Kapoor et al,5 Farzana Shahid et al20 (4.5%). More number of metastasis in lymph node is due to consumption of tobacco in various forms leading to high incidence of malignancy in aerodigestive tract.1

The significance of performing an FNAC in patients with cervical lymphadenopathy prior to an excisional biopsy helps to assess the diagnosis of metastatic tumors of the head and neck. Consequently, direct open biopsy prior to cytology may result in a significantly higher local treatment failure rate, which in turn may be associated with an adverse effect on survival.21

The precision of FNAC in the diagnosis of lymphoma has previously been questioned. The factors that impact the diagnostic specificity and sensitivity of FNAC in the diagnosis of lymphoma include necrosis in involved nodes, the presence of dual pathology, and sclerosis/fibrosis in involved nodes leading to insufficient diagnostic material. Despite its drawbacks, FNAC appears to be a good first line method for investigating the cervical lymphadenopathy.

To avoid or minimize false positive results various factors including regenerative changes, metaplasia and others should be taken into considerations while reporting. False negative results may be due to cystic change, necrotic and hemorrhagic areas revealing no diagnostic cellular yield. Repeat FNAC of solid areas or adjacent area may minimize false negative results in such cases. In this study it is observed that though FNAC is a rapid, cost effective, highly accurate and feasible first line diagnostic tool in management of head and neck swellings, histopathological confirmation is required for especially for neoplastic lesions to avoid false negative results and proper management of patient.1

FNAC has been found to be a satisfactory tool in the diagnosis of tubercular and malignant lymphadenopathy in our study. The lucidity and rapidity of the procedure makes it most appropriate for use on outpatient basis even in peripheral hospitals and dispensaries.

Similar studies conducted in the present institute over the years reveals Reactive Lymphadenitis as the most common lymph node lesion in the head and neck region. But in present study Granulomatous/TB Lymphadenitis was the most common lesion. One of the reason for this could be the nation wide lockdown (COVID 19 Pandemic) and the cases being screened at primary health care levels.