Background: Cyclin D1 is a vital protein that has a widespread role in cell cycle regulations, providing control over G1 to S Phase transition and governing cell proliferation rates.Cyclin D1 overexpression has been reported in variety of tumors. Present study was carried out to the study the expression of cyclin D1 and its association with histopathological differentiation and stage of oral squamous cell carcinoma.

Oral cancers constitutes the sixth most common cancer worldwide1 and its incidence is much higher in many developing countries.2 In India, incidence of oral cancer is 10.4% of all cancers.3 Five year survival rate is 82% in early stage and 27% in advanced stages.3, 4, 5 About 90-95% of the oral cancers are squamous cell carcinoma.6

Despite improvements in both diagnostic and therapeutic strategies, the prognosis of oral squamous cell carcinoma (OSCC) has not changed significantly over the last decades. 7 Moreover, the biological behaviour of OSCC has been found to be varied. That is why it becomes important to find out molecular markers to predict and prognosticate the disease apart from refinement of treatment strategy. The multistep process of carcinogenesis involves progressive acquisition of mutations and epigenetic abnormalities in the expression of multiple genes with an important group being those involved in cell cycle control. 8

Escape of cancer cell from the cell cycle mechanism reflects the fundamental hallmark of cancer progression and even emerging as central role in oral carcinogenesis.8 Indeed, the strongest connection between cyclins and oncogenesis comes from the study on Cyclin D1. Dysregulated or overexpressed Cyclin D1 may lead to shortening of the G1 phase, increased cell proliferation and reduced dependency on growth factors. 9 It causes disturbance in the normal cell cycle control and mitogenic signaling pathways enhancing the cell transformation and tumorogenicity.8

Amplification and overexpression of Cyclin D1 has been reported to be more frequent in head and neck, oral, laryngeal and nasopharyngeal carcinoma. However, studies regarding Cyclin D1 expression and their relation to stage, grade and nodal status are less. With this background, the present study has been undertaken to evaluate the immunohistochemical expression of Cyclin D1 in oral squamous cell carcinoma. And to correlate their expression with histopathological differentiation and stage of tumor.

Specimens were fixed overnight in 10% buffered formalin and processed. Grossing of the specimens was done as per the AJCC guidelines. 10 Four to five micrometer thick formalin fixed, paraffin embedded tissue sections were subjected for haematoxylin and eosin staining.

Histologic examination was performed. Typing and grading of tumor was done according to the criteria outlined in the World Health Organization 11 (WHO) classification of tumours and classified into well, moderately and poorly differentiated cases.

The manufacturer’s instructions were followed after standardization in our laboratory. The following steps were followed: deparaffinization done by placing slides on hot plates at 60° for 30 minutes followed by Xylene de waxing – 3 changes 10 minutes each. Followed with rehydrationby dipping the slides for 5 minutes each in decreasing concentration of alcohol (100%, 85%, and 75%) and then washing by keeping the slides in running tap water for 5-10 minutes followed by dipping in deiodinized water for 2 minutes. For antigen retrieval (Microwave heating method) slides were dipped in antigen retrieval solution (Tris buffer (1.2 gm) + Sodium EDTA (0.37 gm) +1 L distilled water (pH-9) )kept in Coplin jars and are heated in the microwave oven for 6 cycles 3 minutes each. Then cooling at room temperature for 30 minutes and washing the slides in wash buffer (pH – 7.6 – Distilled water (1 L) + Sodium chloride (8.5 gm) + Tris buffer (6.05)) solution for 3 times, 2 minutes each was done. Power block solution (100% methanol + 0.5% H2O2 + 2.5% Nacl) was added on the slides and kept for 12 minutes at room temperature. It prevents background staining. Primary antibody was added (without any dilution) and incubated for 1 hour at room temperature in a covered jar. Then washing three times in wash buffer solution. Incubation in super enhancer solution for 30 minutes done for enhancement and amplification followed again by three times washing in wash buffer. Secondary antibody tagged with HRP was added and incubated for 30 minutes at room temperature. Three times washing in wash buffer solution followed by addition of chromogen DAB solution on slides and kept for 5-10 minutes. Then washing 5 minutes in distilled water and counterstaining with Haematoxylin 1-2 dips done. Lastly dehydration by dipping in increasing concentrations of alcohol (75%, 85% and 100%) and mounting with DPX.

The assessment of immunohistochemical staining was carried out by three independent pathologists. The corresponding H&E section were thoroughly examined before evaluating IHC. The sections were initially scanned at low power (4x and 10x objective magnifications) and the slides showing positive reactivity were further evaluated for Cyclin D1. To determine the Cyclin D1 expression we used a more objective and inclusive method as depicted by Guy et al. 2010.14, 15 Both nuclear and cytoplasmic staining was considered as positive. Cytoplasmic staining in absence of nuclear staining was considered negative.

In every slide ten hot spot areas were selected and observed under higher (400X) magnification. Percentage of IHC positive tumour cells per hot spot was calculated and the mean percentage per slide (labelling index) was determined. A labelling index score of 1, 2, 3, or 4 was assigned for labelling indices 1–25%, 26–50%, 51–75%, and >75%, respectively.

The intensity of Cyclin D1 immunostaining was evaluated15 on the basis of microscopic appearance as weak, intermediate, or strong and an intensity score of 1, 2, or 3 was assigned to them, respectively. A final expression score was calculated by multiplying labelling index score with intensity score, based on which the Cyclin D1 expression was determined as weak (score 1– 4), moderate (score 5–8), or strong (score 9–12).(Figure 1A,B,C,D) 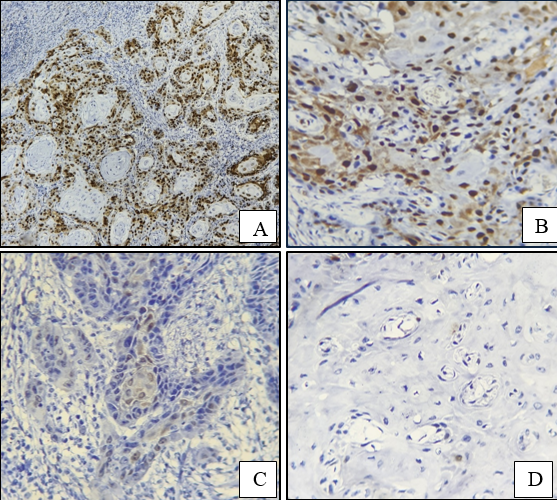 Cyclin D1 positivity was seen in 46 cases (95.8%) of OSCC cases. Further distribution of cyclin D1 reactivity in accordance with site, stage, and histopathological differentiation are explained in Table 2. The labelling index scores, intensity of staining, expressions are graded, and their correlations with clinical and histological parameters are elaborated in Table 3, Table 4.

Both cyclin D1 reactivity and expression did not show any correlation with site and staging of the OSCC (Tables 2 and 4). The histopathological differentiation revealed increase in Cyclin D1 expression with grade of tumor, however, there was no statistically significant correlation. (Table 3, Table 4). The labelling index score and intensity did not correlate with OSCC differentiation (Table 2).

In present study we identified the immunohistochemical reactivity and expression of cyclin D1 and its association with site, staging, and histopathological differentiation of oral squamous cell carcinoma.

In our study, the labelling index did not have any correlation with histopathological differentiation and the results could not be compared directly with other reported literatures, because of different criteria used for determining scores by different authors.21, 22, 23, 24, 25, 26, 27, 28, 29, 30, 31, 32 We have used an objective criteria for assessment of cyclin D1 expression as described by Guy et al. 2010.15, 33

There was nonuniformity in staining intensity, showing maximum cases of strong staining followed by intermediate and weak and there was no statistically significant correlation with histological differentiation. Angadi and Krishnapillai 34 and Mishra and Das 35 noted a uniformly increasing intensity in relation to the histopathological differentiation, whereas Castle et al.36 found no correlation.

These differences between studies could be due to differences in sample size, distribution of tumor site. Relatively higher frequency of Cyclin D1 immuno-reactivity observed in patients with less differentiated tumours. However more sample size and study duration might reveal significant correlation.

To conclude, Cyclin D1 was expressed in significant number of cases in our study. Expression of Cyclin D1 also increases with increasing tumor grade and higher stage. Statistically significant correlation could not be made, may be attributed to small sample size. Further studies with large number of cases and using other ancillary molecular diagnostic techniques would throw further light on the exact alteration of Cyclin D1 in our population. The findings of this study will be an important adjunct along with staging and grading to determine the prognosis of the disease and also to design the treatment. It may lead to decrease in morbidity and improved survival of patients with OSCC

P Mathur R Mehrotra C Fitzmaurice P K Dhillon A Nandakumar L Dandona The burden of cancers and their variations across the states of India: the Global Burden of Disease Study 1990–2016Lancet Oncol201819101289306