Introduction: AIDS is characterized by a number of opportunistic infections which are responsible for high morbidity and mortality. The spectrum and distribution of opportunistic infection (OIs) in AIDS patients is due to viral, Bacterial, Fungal cytopathology and are secondary to the failure of both cellular and humeral response with CD4 count of <200 mm3 leads to morbidity and mortality.

Aim of the study: To document the spectrum of Fungal opportunistic infections in various age groups of HIV/AIDS patients and to note the CD4 counts among the group

Materials and Methods: This is a descriptive study. Clinically and laboratory confirmed fungal cases of opportunistic infections in HIV patients are recorded, during the one year period from June 2017 - May 2018. Blood of these patients processed for CD4 counts, by Partec flow cytometery to assess the immune status among them.

Results: Out of 500 HIV seropositive cases, we found 65 of fungal opportunistic infections accounting for 13% of the cases. Majority of opportunistic infections, were in the age group of 31-40 years (37.8%) with predominance of male accounting for 55.2% of the cases. Out of 65 cases, 9.2% had oral candidiasis followed by 1% of vaginal candidaisis with CD4 count <100 mm3.

Conclusions: In our study, predominant lesion observed was oral candidiasis among all the fungal opportunistic infections. Our study will help in programme management and to plan appropriate strategies for the investigation and treatment of common OIs as a part of management programme for HIV infected populations.

AIDS is an emerging pandemic viral infectious disease caused by Human Immunodeficiency Virus, which has posed the greatest challenge to public health in modern world. Clinical manifestations in HIV infections are primarily due to viral cytopathology and are secondary to the failure of both cellular and humoral immune response.1, 2, 3, 4, 5

The high incidence of commonly reported opportunistic infections with low CD4 counts in Indian HIV infected individuals highlights the need for early screening and also the need to increase awareness in health care providers in order to improve decisions regarding prophylaxis for prevention and appropriate therapeutic interventions. 7, 8, 9

To determine role of CD4 decline and the incidence of opportunistic infections, CD4 counts as a clinical score serve as both an alarm for timing of prophylaxis and a guide for therapeutic intervention. 2, 3, 6, 10

It is also documented that types of opportunistic infections is profoundly influenced by geography and prevalence of infectious diseases in particular region, nutritional, socioeconomic conditions and other factors. 1, 2, 11, 7 Therefore this study will be conducted to evaluate the correlation between CD4 counts in HIV infected patients with onset of specific opportunistic infections. 1, 2, 7, 9

This was a prospective study involving proven Fungal cases of HIV/AIDS with signs and symptoms of opportunistic infections attending the outpatient department or admitted to Hospitals during the one year period, from June 2017 to June 2018 from the study group.

500 HIV/AIDS seropositive patients with signs and symptoms of OIs, clinically, radiologically and diagnostically proven cases. Informed consent was taken from all patients during the study.

Method of collection of data

With strict aseptic precautions, 3ml of venous blood sample was collected by venepuncture using EDTA vacutainer and processed by flow cytometry, according to the standard protocol supplied by the manufacturer. (PARTEC IVD FLOW CYTOMETER machine, by Partec Gmbh. Am Flugplatg 13. D-02828 Gorlitz. Germany).

The mouse monoclonal antibody MFM-241 recognizes the human CD4 antigen, a transmembrane glycoprotein (55 kDa) of the immunoglobulin supergene family, present on a subset of T-lymphocytes ("helper/inducer" T-cells) and also expressed at a lower level on monocytes, tissue macrophages and granulocytes. Approximately 20-60% of human peripheral blood mononuclear cells as well as a subpopula-tion of monocytes but with a weaker signal are stained The antibody has been studied at the 8th International Workshop on Human Cell Differentiation Molecules HCDM (former HLDA VIII), May 2006, Quebec, Canada. CD4 is the primary cellular receptor for the human immunodeficiency virus (HIV).

CD4-PE fluorescence can be analysed on a Partec Flow Cytometer with an excitation light source of 488 nm or 532 nm (blue or green solid state laser). To count CD4+ T-cells transfer the test tube with 84ftul of the ready prepared blood sample (see Method) to the Partec counting results will be displayed automatically as CD4+ T-cells per µl whole blood.

The collected data was tabulated, analyzed and subjected for statistical analysis using SPSS 19.0. Results are presented as range for quantitative data and number and percentage for qualitative data.

The present study was carried out on 500 HIV seropositive patients with signs and symptoms of 65 Fungal opportunistic infections attending District Hospital, ART center, over a period of 12 months (June 2017 to May 2018), to know the incidence of fungal infections and their correlation with CD4 count.

The observations made from the study are shown in the following

Distribution of risk factors among cases

Distribution of cases according to WHO grading

We observed that occupation wise distribution of cases maximum cases belongs to agricultural labourer accounting for 31.4% of the cases,

In our study we noted 65(13%) cases of fungal infections with majority of cases with oral candidiasis. 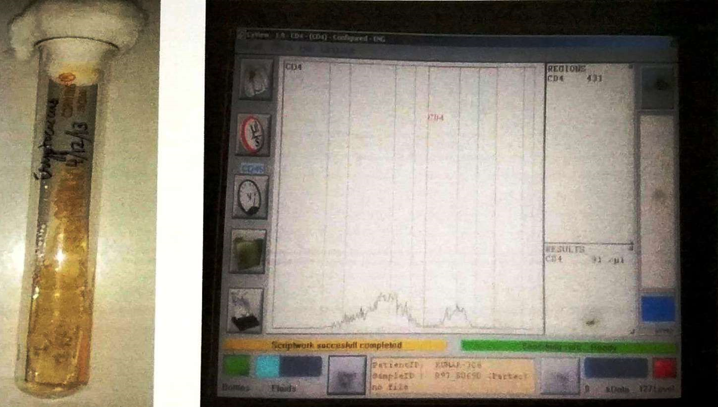 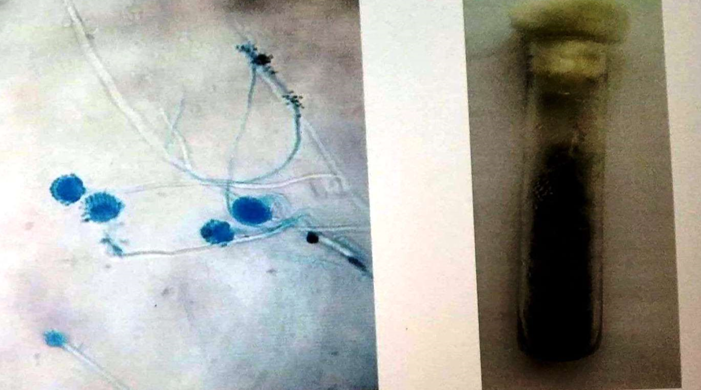 In the present study the clinical profile of various fungal opportunistic infections among HIV seropositive patients admitted were analyzed.

Male: female ratio in the present study was 1.2:1. Our findings are in consistent with Vickers et al study showed 1.4:1. While the males belonged to a wide age spectrum, the females were a considerably younger population, and most of them acquired infection from their spouses, reflecting the male dominance in Indian society and emphasizing an increased need for awareness and counseling of both spouse.

Comparison of Fungal isolates in other studies

Our findings are consistent with Ghate et al study. 11 The lower CD4 counts in present study may be due to a diagnostic bias from later detection of the disease reflecting a paucity of extensive diagnostic facilities at the peripheral health care centers, so that the diagnosis remains uncertain or is not established until late stages, when significant immunosuppression has already set in and patients are referred to tertiary health care centers. 1, 13

The findings of low CD4 counts at admission to the hospital demonstrate that a high level of immunodeficiency was already present, defining advanced AIDS.

Epidemiological features depend upon social and cultural practices of the people which may again vary from region to region.

Our findings are in accordance with Ghate et al 11 study. Oral candidiasis was the commonest mucocutaneous opportunistic infection observed in our study. The number of T-helper cell usually fall over the course of HIV infection. Serious fungal infections tend to occur, when T-helper cell count has dropped to around 100 mm3.

Four of the HIV seropositive patients were co-infected with pneumocystis carinii pneumonia (PCP) in the present study. It is now established that PCP is one of the common opportunistic infections in HIV but the cases are relatively less documented, may be due to the lack of routine testing facility. PCP is rarely documented in India

Four percent of the HIV seropositive patient had polymicrobial infections, which included oral candidiasis plus pulmonary tuberculosis in 2% and PCP plus cryptosporidial infestation in 2%.

About one percent of HIV seropositive cases of present study were co-infected with Hepatitis B virus. All the co-infected patients were under gone blood transfusion previously.

HIV/AIDS is the burning crisis worldwide. Early diagnosis of opportunistic infections and prompt treatment improves the quality of life, increases the life expectancy among infected patients and delays progression to AIDS. Timely initiation and continuous intake of ART will not only prolong the survival but will also decrease the viral load a transmission of the disease.