Case Reports: We report three cases of PNET/Ewing sarcoma of kidney in patients of age 25and 35 years with complain of hematuria and abdominal pain .CT scan revealed heterogeneously enhancing lesion in kidney and we received radical nephrectomy specimen with variegated appearance on gross. Microscopic examination showed tumor with malignant cells in sheets and pseudorosettes .The diagnosis was given as PNET/ES and was confirmed with immunohistochemistry.

Discussion: Renal PNET/ES is a member of Ewing sarcoma family. They are rare tumor originating from the neural crest and are more aggressive than PNET at any other site. The presence of Homer Wright rosettes is less common in extra-osseous Ewing sarcoma and their presence is a sure diagnosis of PNET/ES. The differential diagnosis for these small round cell tumor of kidney other than PNET include malignant lymphoma, renal neuroblastoma,,embryonalrhanbdomyosarcoma, wilms tumor. The immunohistochemical marker CD99 positivity is diagnostic. Other markers positive are S-100, vimentin and NSE (neuron specific enolase).

Primitive neuroectodermal tumor (PNET)/ Ewing sarcoma(ES) are aggressive tumors commonly seen in bone and soft-tissue of the body.1 They are rare in kidney and were first identified by Stout in 1918. These tumors are mostly seen in young adults in second and third decade of life.2 They are commonly confused with other small round cell tumors.Also clinical findings are very similar to other renal malignancies, hence histopathology and immunohistochemistry remains the gold standard for confirming the diagnosis.3, 4

We report three cases of PNET / Ewing sarcoma .Two patients were males 25 and 35 years and third patient was25 year old female. Histopathology showed malignant small round cells in sheets and diagnosis was confirmed on immunohistochemistry.

A 35 year old male presented with sudden onset hematuria since 2-3 days. The CT scan report showed large, irregular, heterogenous mildly enhancing left renal mass replacing entire kidney. Multiple necrotic areas seen. No hemorrhage or calcification noted [figure no. 1? ]. We received radical nephrectomy specimen. Grossly, the kidney was enlarged measuring 20x13x8 cm and weighing 1 kg. External surface was bosselated. The ureter measured 4 cm in length. The cut surface showed diffuse infiltration of renal parenchyma by fleshy tumor with variegated appearance. Also few areas of hemorrhage and cystic changes were seen. Tumor was seen to invade renal sinus and pelvicalyceal system [figure no.2]. Microscopic examination showed tumor with malignant cells arranged in solid sheets cords and pseudorosettes. The cells were monomorphic with small round nuclei having ﬁne chromatin and inconspicuous nucleoli [figure no.3]. Immunohistochemistry was performed and it showed positivity for CD99 while CD56 synaptophysin and chromogranin was negative [figure no.4]. On subsequent follow-up the patient deteriorated rapidly and developed altered sensorium and metastasis to skull. The patient succumbed to death within a year despite of all attempts to revive.

Based on the histology and IHC findings the diagnosis of PNET/Ewing sarcoma was confirmed in all the cases. 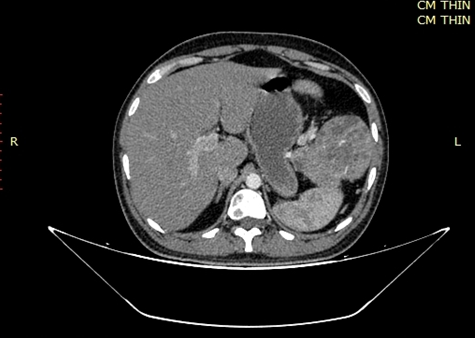 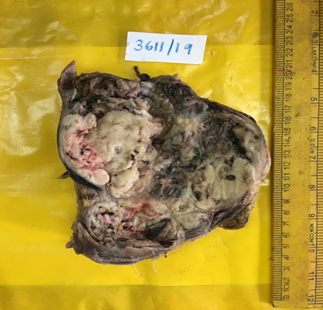 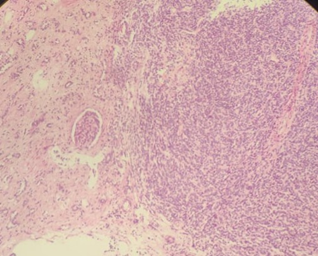 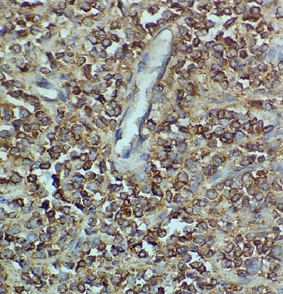 Renal PNET/ESis a member of Ewing sarcoma family.1, 2, 3 They are rare tumors originating from the neural crest and are more aggressive than PNET at any other site.5 Rafael et al in study of 11 cases observed that most common age of diagnosis was between 18 to 45 years.4 Other studies also showed mean age of 27 for the diagnosis of these cases. 1, 2, 4 In our study, the age of two patients was 25 years and the third one was 35 years.

Seth at al in study of 8 cases of PNET kidney observed that the most common clinical presentation was abdominal pain, abdominal mass and hematuria.1 In our case all the patient came with complain of hematuria. One patient had an aggressive clinical course after nephrectomy and succumbed to death within 1 year. There are no specific radiological investigations to diagnose PNET preoperatively. In study by Rafael at al, tumor on gross showed necrosis and hemorrhage and four had cystic change.5Our study showed necrosis and hemorrhage in all the cases. Microscopically tumor cells are arranged in sheets and chords, cells are monomorphic with small round nuclei, fine chromatin. The presence of Homer Wright rosettes is less common in extra-osseous Ewing sarcoma, their presence is a sure diagnosis of PNET/ES.1 Our cases showed peseudorosette formation at places. The differential diagnosis for these small round cell tumor of kidney other than PNET/ES include malignant lymphoma, renal neuroblastoma ,embryonalrhanbdomyosarcoma. However, blastema predominant wilms tumor remains the main differential diagnosis.2

The immunohistochemical marker CD99 positivity is diagnostic. Other markers positive are S-100, vimentin and NSE (neuron specific enolase).1 In our study, all three cases were confirmed with IHC. The cytogenetics also aid in diagnosis of PNET which shows Ewing sarcoma (EWS) gene and ETS translocation.90% of PNET cases of kidney shows t (11:22) (q24:12) on cytogenetic analysis. The overall survival rate for 5 years of organ specific disease is 45-55%.2

Renal PNET/ES are rare malignant tumor with aggressive clinical progression and poor prognosis. They should always be considered in the differential when young adult presents with large renal mass. Histopathological diagnosis in adjunction with immunohistochemistry is helpful in diagnosis of this tumor and helps clinician for immediate aggressive treatment.treatment.